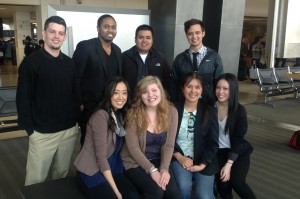 Students at Seatac waiting to start the adventure.

The Communication weekend trip to L.A. with Department Chair David Domke proved to be a huge success, as students with career goals in public relations, journalism, and video editing all found hope in the advice given by UW alumni.In only two days, the students had nine meetings with professionals at different media production sites, all with unique stories since graduating from the UW.

“What was great was to see the students come to recognize how the people could offer different kinds of knowledge because they are at different points in their career,” Domke said. “So they would ask questions that would tailor to where people were at and the jobs that they did…and that takes a lot of preparation, maturity, and a respect for the entire process.”

With an endless amount of questions and a driving force of curiosity, the students got more out of the trip than they had ever expected.

“I’d say it was definitely one of the best professional development experiences I’ve had while at UW,” said Sean Fraser, a senior majoring in journalism and English. “It was exciting to see how the L.A. market is different than the Seattle market because I’ve had a lot of experience in PR and marketing through internships and jobs up here, but it’s a really unique corporate culture down there.” 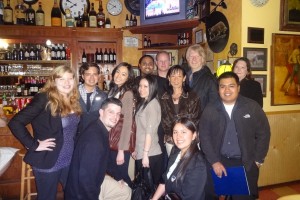 While casually chatting with Pulitzer Prize winners over dinner, Fraser especially enjoyed how Evelyn Iritani (B.A., 1978), who owns her own PR firm, opened up about how social media has affected the field of communication.

“I want to stay in touch with all these different people that I met,” Fraser said. “All of them are so incredibly willing to help us UW students as aspiring professionals in the industry and I really think I need to capitalize on that and learn from these people that already have amazing success.”

Senior journalism student Ilona Idlis found incredible passion for their work to be a common trait among all the experts.

“I went into it thinking that I was going to find out about the underbelly of Hollywood and find out how all these things are crafted,” she said, “but instead I left totally inspired and motivated by these personal stories that these alumni were generous enough to share with us.”

While everyone has preconceived notions of the people that live and work in Hollywood, the alumni are proof of a positive culture within the city.

“One of the overarching themes that pretty much everyone touched on was that you need to surround yourself with good people,” Idlis said. “People talk about Hollywood as being toxic and those people are there, but that’s not who you should be around…and that’s something you could apply to anywhere you go.” 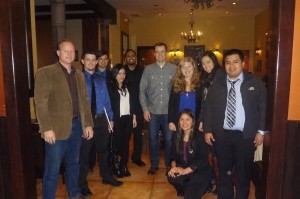 Idlis was especially inspired by Peter Chiarelli (B.A., 1996), a once producer now writing screenplays including the blockbuster “The Proposal.” Chiarelli said that your first career choice doesn’t have to be your final selection. Preparing to graduate in June, Idlis found this concept to be “truly mind-blowing and has put a lot of my worries at ease, which I am very grateful for.”

“I’m a lot more comfortable jumping into journalism and giving it my all,” she said, “and if it doesn’t work out, I wouldn’t be devastated. I’ve discovered all these additional interests while I was in L.A., but I’ve realized that I don’t need to address them all now.”

Similar to Idlis, Michael Lopez never thought of moving to L.A. previous to the weekend trip. Growing up in the small town of Cashmere, Lopez gained confidence by talking to editors and film production professionals.

“I thought Seattle was big enough for me now, but after two days of being in L.A. I thought I could see myself there,” he said. “Now that I know these people, I can network with them and at least get an entry job…I feel like I can now. I made it this far, why not pursue video editing in L.A.?”

By watching his single mom work as a migrant worker, then growing up to become the first in his family to go to college, Lopez connected with guidance from Lindsay Marcus (B.A., 2010), who has worked her way to become the Associate Producer of the TV show “Hell’s Kitchen” in just two years. 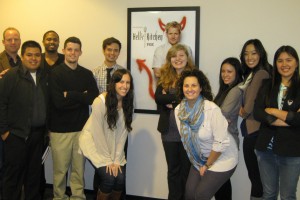 Hanging out with Carley Simpson at Hell’s Kitchen.

“You have to start at the low bottom, but do more than the job description requires,” Lopez recalled of Marcus’s advice. “Stay longer, do more, and you’ll get placed higher.”

Alumni Relations Manager Victoria Sprang said she thought this was an experience these students would draw from for a very long time.

“I noticed a change in them after two and a half days,” she said. “All eight students showed a new maturity and, best of all in my opinion, they became fast friends.”

Idlis expressed that this adventure isn’t just for people interested in the entertainment industry. It’s for anyone looking to succeed.

“There’s something about seeing [the alumni] in their own environment and seeing how they really flourish there,” she said. “Also how other people relate to them, you see the amount of respect they’ve garnered.”

Domke said that he was proud of all the students and how they approached the entire opportunity. Not only did the students experience invaluable lessons, but the alumni got a lot out of it as well.

Idlis added that “there’s just a genuine good will. It’s nice to know that when we venture out into L.A. there are alumni networks that are going to welcome us. The community at UW doesn’t end at graduation, it very much continues with the people who went here and who want to see you succeed.” 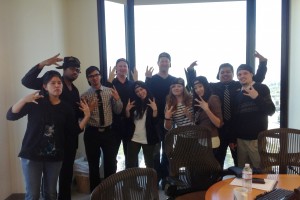 Dubs up with Jerry Collins at DumbDumb.

We’d also like to extend a special thank you to those not mentioned in the article. Each one of them made an impact on these students and we appreciate all their willingness to meet up and offer advice:

Dr. Peter Clarke, UW Comm Alumni Hall of Fame member and USC Professor who co-directs “From the Wholesaler to the Hungry” with Susan Evans.

Ken Baldwin, host, writer, and creator of “Season on the Edge”