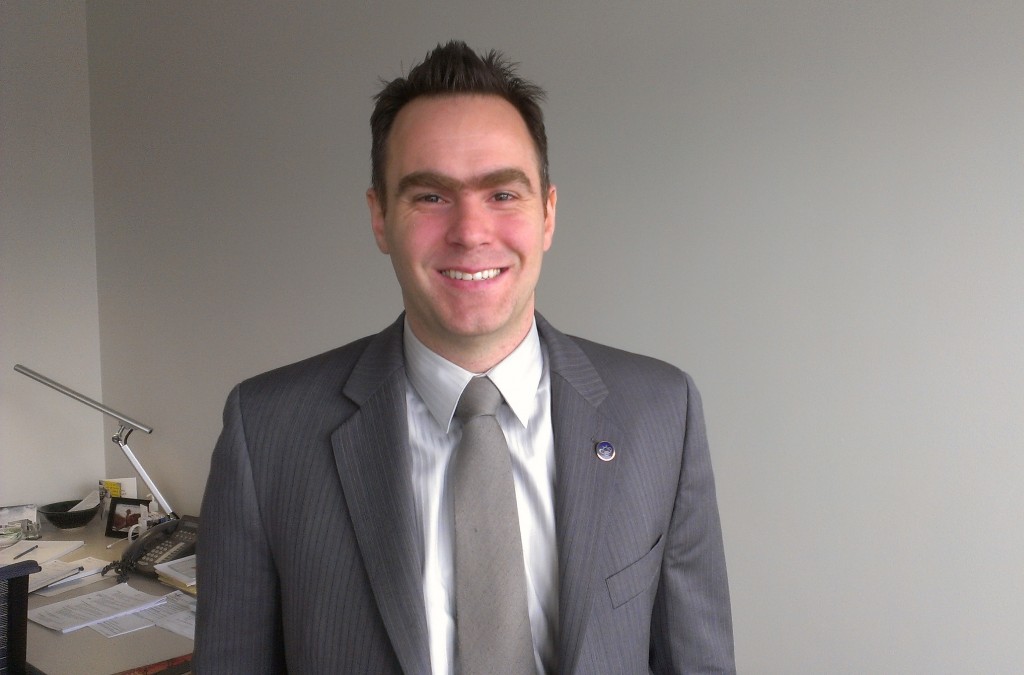 An award developed to honor and support a recent graduate (within 10 years) of the Department of Communication who has shown both impressive career accomplishments and a commitment to the public good, Edgar Gonzalez (B.A., 2004) fits all of those categories.

Although graduating from the UW almost 10 years ago, Gonzalez hasn’t left the community, working in philanthropy and alumni relations. His passion for education stems from his background, emigrating from Argentina when he was 10 years old.

“My parents moved three young kids across the world so that we could have a better life, the American Dream story so-to-speak,” Gonzalez said. “So I had a lot of helping hands getting through college, and obviously I worked through college, but I had a lot of grants and scholarships. To me, access to education has always been really important.”

During the first week of his freshman year, Gonzalez was looking for a job and was hired at the Student Calling Program, where students call alumni to reconnect with them and ask for donations. Learning about large scale fundraising and how the university operates through private philanthropy exposed him to a line of work that he continues to do today.

Knowing that he didn’t want to be a journalist after graduation, Gonzalez began working at the Foster School of Business where he became part of a team that was in charge of alumni relations, that eventually started an MBA reunion program. Then he moved to the College of Arts and Sciences where he did major gift fundraising for 12 departments.

“At the UW I had the privilege of working to raise scholarships to support students who can’t afford to come here,” he said, “but then I started thinking, what if we go even further back and help students get to college.”

With that in mind, Gonzalez took a short hiatus from the UW to work for a nonprofit called the Alliance for Education. The mission is simple: to ensure every child in Seattle Public Schools is prepared for success in college, career and life. As the director of development, Gonzalez ran fundraising, marketing, and PR, and later supported the development of a program called the Seattle College Access Network, started to significantly increase the number of students graduating from Seattle Public Schools and successfully pursuing a post-secondary degree.

“Working for a small nonprofit is a lot of work and you wear a lot of hats,” Gonzalez said. “After 3 years, I got a call that [my current] job was available and I had kind of been thinking about making my way back to the UW. The UW is somewhere I feel very comfortable and somewhere I feel I can have a lot of impact. And I’m a Husky. It was nice to come home so-to-speak.”

Gonzalez now holds the title of Assistant Dean for Advancement and External Relations at the College of Built Environments. While he said this job has been the most demanding than any other role he’s had before, he welcomes the challenge.

“My goals professionally are just to continue to grow and to continue to support this institution,” Gonzalez said, “and through my work connect the community to this university, which is the flagship institution of the state and has a lot of resources that either people don’t know about or have access to. Through the philanthropy that we support, I want to continue to help people access education here.”

Volunteering comes naturally to Gonzalez as something you just do. He has devoted his time to Big Brothers Big Sisters, coached a boys youth soccer team for eight years, is on the advisory board at his church, and has been involved in countless projects with the Department of Communication, including serving on the Alumni Board for the past nine years (which he helped launch), raise money for the annual auction, speaks at and facilitate professional development events, and recruit other volunteers as well.

“Caring about the community has always been part of my family, my parents’ upbringing,” he said. “So being engaged in the community is part of our DNA so-to-speak. It was fun to do all that stuff; I didn’t feel like I was doing anything special.”

All the while, Gonzalez is a husband and a father to his two-year-old daughter, and somehow “you keep all the plates spinning and ensure that you have some sort of balance.”

“You have to be able to say, ‘Ok, I’m going to work 16 hours today, but I’m going to spend the morning with my daughter tomorrow because I didn’t get to see her before she went to bed last night,’” Gonzalez said. “That’s why the UW is such a great place because everyone understands that and I’ve been fortunate to have such great bosses and mentors who understand the value of that.”

Not expecting the award, Gonzalez said he is “very grateful and quite shocked,” and hopes that current students continue to be inspired as the next generation of alumni and citizens of the communication profession.

Even though Seattle is obviously a big city, Gonzalez describes it as a small town where everyone knows everyone. He said he and his wife, who is from the Bay area, love the way people support each other in this town and how the city has its own unique flavor.

“Personally, I just hope to be a good person,” Gonzalez said. “Doing the right things, growing my family, and staying engaged in this community, which has done a lot for me, so I want to give back.”