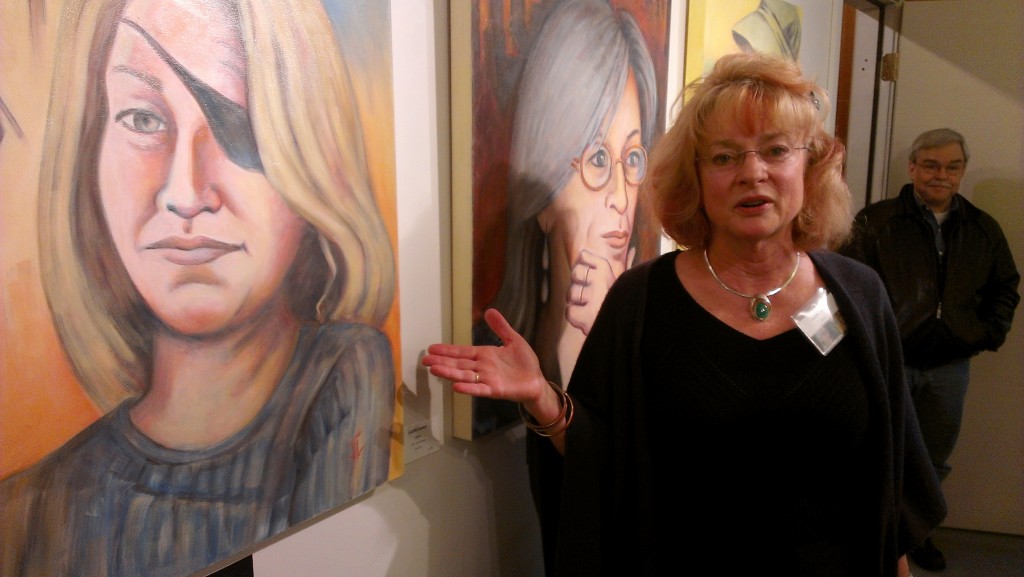 As a woman and recent UW journalism graduate, this art exhibit affected me in ways that others have not. Although I’ve always been appreciative of such talent, I am no art expert by any means. But what I can see from this collection is a group of women whose lives were taken too soon, doing a profession that they were truly passionate about (as am I), speaking through the painted eyes by Judith Larsen (BSFA, 1972), a former news reporter and anchor and current traffic radio reporter.

Although she has been in the media industry off and on for years, after graduating from the UW and later going back to school at Bellevue Community College to study broadcast communication, Larsen has always been an artist. A hobby that has taken a bit of a backseat to motherhood and reporting, but this revival of her art is both powerful and meaningful.

“I’m kind of a news junky when it comes to international news; I’m always on it. I started noticing that more and more journalists were getting killed,” she said, “whether it was drug cartels, covering wars, corruption – and then we got up to a point where they became targets at an incredible rate…and I said, ‘This is crazy and I have to do something to remember these people.’ And I realized when they do die, nobody talks about the women.”

Reuters reported that 2012 was one of the bloodiest years for journalists with more than 88 reporters around the world killed on the job, mostly in Syria, Mexico, Pakistan, and Somalia.

UW Communication lecturer, and former reporter and editor who has previously been involved with the Dart Center, Meg Spratt tapped into her experiences working with and talking to journalists who have reported war and said, “Combat reporters, including women, tend to be a resilient and dedicated group. Exposure to the trauma of war, as well as the personal risks involved, affect different journalists in different ways. All do an important job and often dangerous job, and I think this exhibit reminds us of that. I’m glad to see this group of women being honored and remembered.”

Although Larsen was skeptical to present her work to commercial galleries due to the somewhat depressing topic, Sue Peterson, co-owner and curator of the Fountainhead Gallery, said she believed in the cause.

“I feel honored to have this opportunity to create this series of oil paintings to remind each of us of the sacrifices few of us would be willing to make to protect the freedoms we take for granted,” Larsen said.

Larsen’s collected is being displayed at the Fountainhead Gallery in Capitol Hill until March 24. The space is open Thursday and Friday 11 to 6, and Saturday and Sunday noon to 5.

Below is a line or two about each female journalist (many pictured in the slideshow from the opening reception on March 2). Although Larsen never met any of them, she talked about them as if she had, providing information about their lives and painting features unique to their stories:

Marie Catherine Colvin was an award-winning American journalist who frequently reported on CNN and also worked for the British newspaper The Sunday Times. She was killed in a rocket attack at age 56 while covering the war in Syria. Colvin wore an eye patch after losing her left eye to a blast from a Sri Lankan grenade in 2001.

Anna Politkovskaya was a Russian newspaper editor, journalist, author, and human rights activist who paid the ultimate price for her opposition to the Chechen conflict and for her investigative articles about former President Vladimir Putin. Politkovskaya was found dead in the lift of her block of flats in central Moscow in 2006. She had been shot twice in the chest, once in the shoulder, and once in the head at point-blank range.

Dickey Chapelle was an American photojournalist known for her work as a seasoned war correspondent from World War II through the Vietnam War. She worked for National Geographic and was on her last assignment when she died in Vietnam, posted with the Marines during the battle of Iwo Jima. She became the first female war correspondent to be killed in Vietnam, as well as the first American female reporter to be killed in action.

Zahra “Ziba” Kazemi was an Iranian-Canadian freelance photographer who was killed by Iranian officials following her arrest in Iran. Although Iranian authorities insist that she accidentally died of a stroke during an interrogation, a former military staff physical stated that her body showed obvious signs of torture, including a skull fracture, broken nose, signs of rape and severe abdominal bruising.

Neda Agha-Soltan’s death was caught on video at the 2009 Iranian election protests, where she was shot in the chest after stepping out of her car. Her dying image drew national attention and became inspiration to those seeking democracy in Iran.

Margaret Moth was a CNN photojournalist, originally from New Zealand, who was shot by a sniper in the face on assignment in Sarajevo in 1992. Although she did not die, she endured many surgeries, and eventually died of colon cancer in 2010 at age 59.

Shaima Rezayee was a ground-breaking 23-year-old television host of a music show in Afghanistan. She became a pop culture icon, often appearing without a burqa and wearing makeup. She was found dead in her home several weeks after being fired with a gunshot wound to her head.

Elizabeth Neuffer, an award-winning reporter for the Boston Globe, was killed in a car accident in 2003 while covering the Iraqi War.

Atwar Bahjat was an Iraqi journalist and popular television anchor who was abducted, tortured, raped, and murdered while covering a story in Samarra. She insisted on being assigned hard news stories despite being a woman, and ultimately suffered an unspeakable death.

Michelle Lang was a reporter for the Calgary Herald and became the first Canadian journalist to die in the War in Afghanistan. She was struck by a roadside bomb while riding in an armored military vehicle at age 34, survived by her fiancé.

Mika Yamamoto was an award-winning Japanese video and photo journalist for the news agency Japan Press. She became the fifteenth journalist to be killed in Syria – shot nine times, with about 800 people attending her funeral.

UPDATE 3/19/2013:  “This weekend I had the moving experience of meeting  with the parents of Michelle Lang, the young Canadian reporter killed in  Afghanistan. They travelled from Calgary, Canada to view this [exhibit],” Larsen said.

Also, Larsen has announced that this show will be exhibited later in full form at a state convention to be held in Edmonds upon invitation by the Snohomish County Arts Commission. More details to come.