Journalism student Deanna Isaacs received a scholarship through the Department of Communication from the NW Automotive Press Association. Since then, she was invited to observe their Mudfest SUV of the year competition in Snoqualmie, which she said was “a great place to learn about auto journalism and network with people in the industry.” In the article below, Isaacs shares her experience: 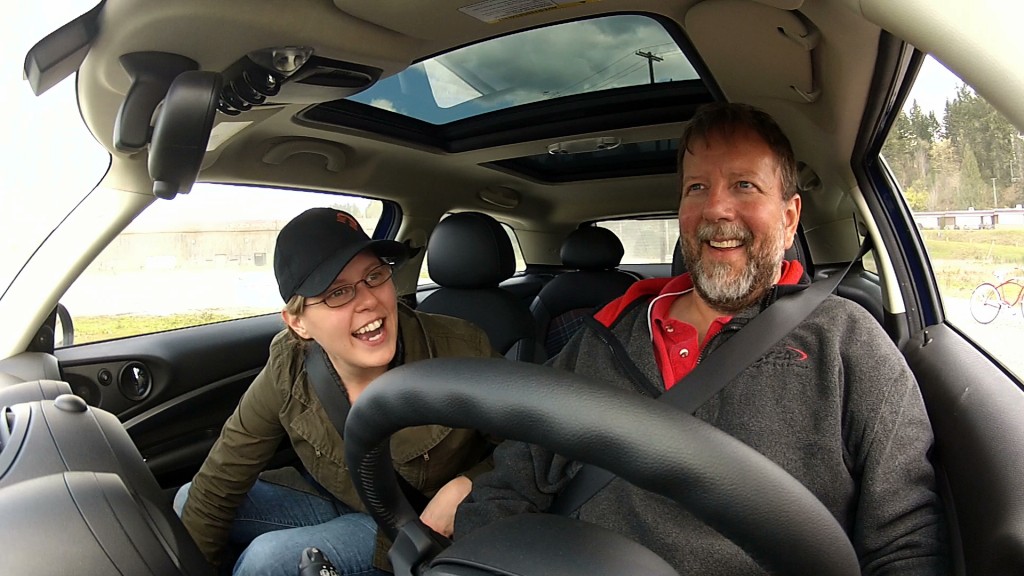 Jeff Zurschmeide (right) takes Scholarship student Deanna Isaacs (left) for a spin in a Mini Paceman while filming a video for production. Photo courtesy of NWAPA and taken from GoPro footage.

As a student, I’ve been wondering what kind of journalism I’d like to go into – current affairs always interest me, but I have a passion for sciences and for all things automotive (I work on the Press Relations team of the UW Formula Motorsports team). I’d long ago come to the realization that these two things (science and automobiles) are not mutually exclusive through writing experience gained at the UW and odious amounts of virtual window-shopping for cars I’ll never have enough money to own.

During my first year in the UW Journalism major, I was notified that I’d received a scholarship from the Northwest Automotive Press Association and was, shortly thereafter, invited to be an observer at their annual Sport Utility Vehicle (SUV) of the Year competition – an invitation I readily accepted with enthusiasm.

Yes, autos are cool, but it wasn’t access to shiny (then dirty) vehicles that made my journalistic-senses tingle. It was the people. It was the welcome reception, the openness with which they greeted me, and the amazing advice that I received.

I’ve dreamt of having a connection to the automotive industry ever since one of my dad’s old friends brought over his Orbit Orange 1970 Pontiac GTO – also known as simply, “The Judge” – and let the 366 horsepower, Ram Air III engine roar to life in my driveway.

Automotives beat under my hood… ahem… in my chest.

So when I was told I’d be paired up with an auto journalist who even participates in rally, I was ecstatic. Jeff Zurschmeide has written countless articles, several books, and has driven on sea ice in the Alcan 5000 rally, which runs on a road known to Ice Road Truckers as ‘fairly dangerous’ and is the longest rally in North America. And I got to shadow him as he tested the 26 cars from European, Asian, and American auto makers (Buick, Land Rover, Subaru, Mazda, Mercedes, BMW, and more…).

Which brings me to the first thing I learned at the event: Even though there were representatives from all the major companies, it wasn’t they that supplied the cars – it was intermediaries, such as STI or Page One. An even more amusing learning experience when you envision me sitting in a car speaking to the representatives of the intermediary STI, when I start rambling about the enthusiast version of Subaru vehicles…  This doesn’t mean that the manufacturer representatives were missing, it just means that the cars driven were not from the manufacturers. 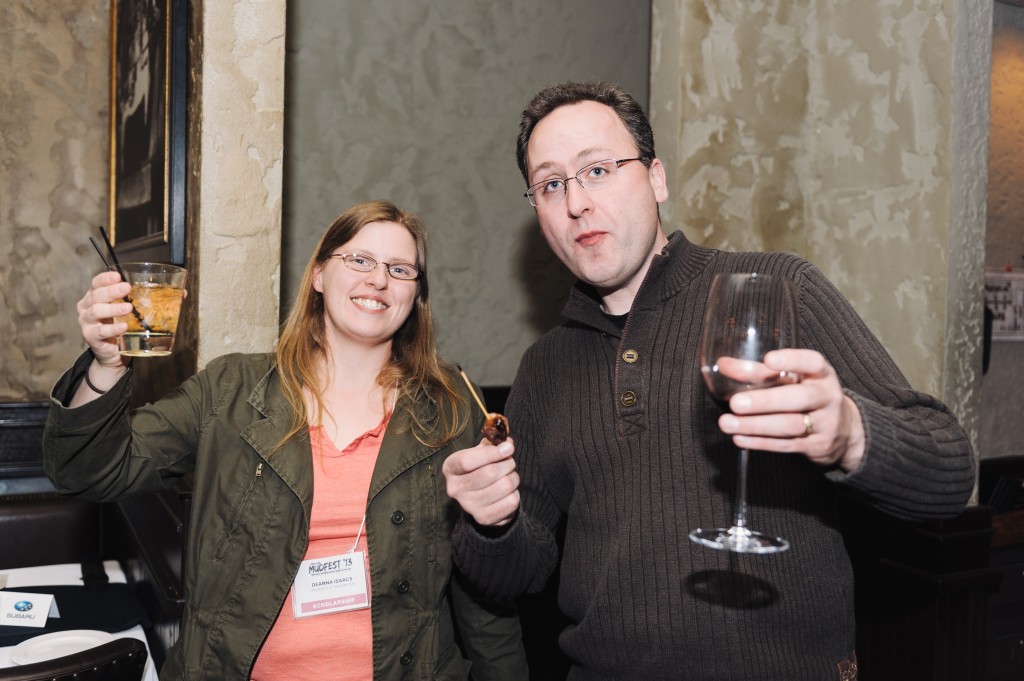 Deanna Isaacs (Left) and Ryan Douthit (Right), the coordinator of Mudfest 2013 and producer of Driving Sports TV, enjoying a nice refreshment after a day of driving at Dirtfish. Photo courtesy of NWAPA, taken by Armin H. Ausejo.

As Jeff drove, we spoke about a range of topics including how to make it in the industry and how the landscape of automotive journalism has changed with the digital revolution. But it wasn’t just he whose brain I picked. I spoke to freelancers for the New York Times, a TV personality who airs up and down the west coast, and a husband and wife journalism team, and more – each freely giving me invaluable advice.

After driving was done, there was dinner. I was a guest at the head table, next to the leadership of the NWAPA and the dinner’s host, Volvo’s representative. That night I got priceless advice from Geno Effler, the vice president of corporate communications for Volvo of North America, about how to better market the Formula team to journalists and what I can do to break into the auto-journalism industry. Advice I’ve already started putting into practice.

The next day, I returned to meet other journalists and manufacturer representatives which I hadn’t gotten a chance to speak with the first day (there were over 30 of them) and to see the end of their two-day event – a difficult course that puts the SUVs through their paces, more than the first day’s course. Three vehicles got a longer, rough road course where I looked straight out the passenger seat window into puddles (or birds circling across the path of a cloud) and wasn’t jostled out of my seat or had my spine break in twine – these vehicles were made for this – all while listening attentively to all that was being said with a smile on my face.

I spoke to more of the manufacturer representatives than I had the day before and learned that many of them were ex-journalists that had jumped sides, for one reason or another, and now plied the autos to their former peers. I realized that their passion for individual makers is much like the joy I get from writing accolades for the Formula Team – while journalists remain unbiased, manufacturer representatives get to lavish in bias. [Oh enthusiast company, if you’re reading this, my Mazda-ratti writing skills are up for grabs starting Summer 2014.]

In the end, what I really garnered from the event was an opportunity to learn from, and network with, the industries leaders and legends, to see my favorite industry from both sides of the press line, and learn more than I ever could have about what I really want to do for a living – share automotive ingenuity with the world – all while meeting the people who make the industry what it is: amazing. An opportunity brought about by a partnership between the UW’s Communication Department and the community supporting it.