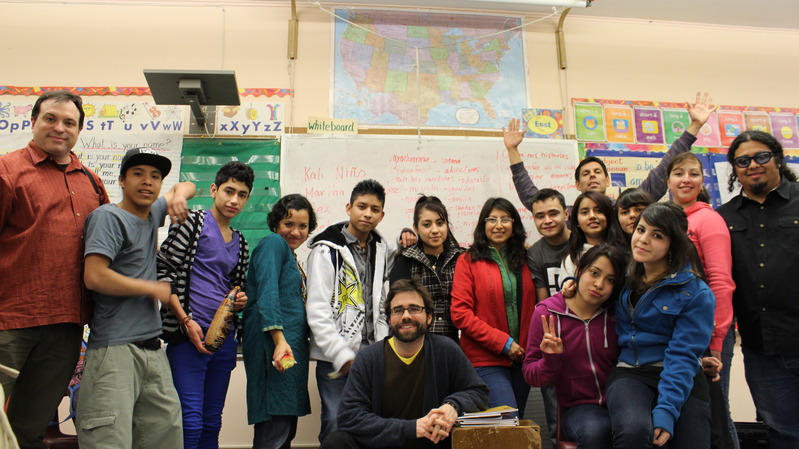 About a month ago, Associate Director of the MCDM program Scott Macklin joined a team of artists, community activists, and educators to contribute to a week-long project called Sounds Beyond Barriers. Facilitated by Quetzal Flores and Martha Gonzalez, students at Seattle World School, which is dedicated to helping immigrant children in academic achievement and full participation in American society, composed original songs in collaboration with guest artists about issues that affect their lives, such as bullying and equality. Supported by several organizations, including the Seattle Globalist and the Communication Leadership program, the week culminated in a showcase on March 2 featuring the students’ songs, as well as performances by Grammy award-winning Latin alternative band Quetzal and other visiting artists.

“The key about this week wasn’t necessarily the music making, which was really important,” Macklin said, “It was the establishment of the relationships. And relationships are the context in which we make community-centric media.”

Macklin was part of the Sounds Beyond Barriers design team, leading the media making sessions and producing a film that is featured below.

“One of the things is that everybody was able to give their own point of view with what they were speaking about,” said Gonzalez, member of Quetzal and UW graduate. “About the future and telling their stories through song, and if you were feeling sad you would quickly forget what was happening because you were able to engage in music and create music together.”

Check out this video by Scott Macklin following the project from Day 1 to the showcase, and a photo slideshow with images by Abduwahab Hilowle, Gerardo Alfaro Valle, Dulamsuren Narantsetseg, and Nikko Macklin: