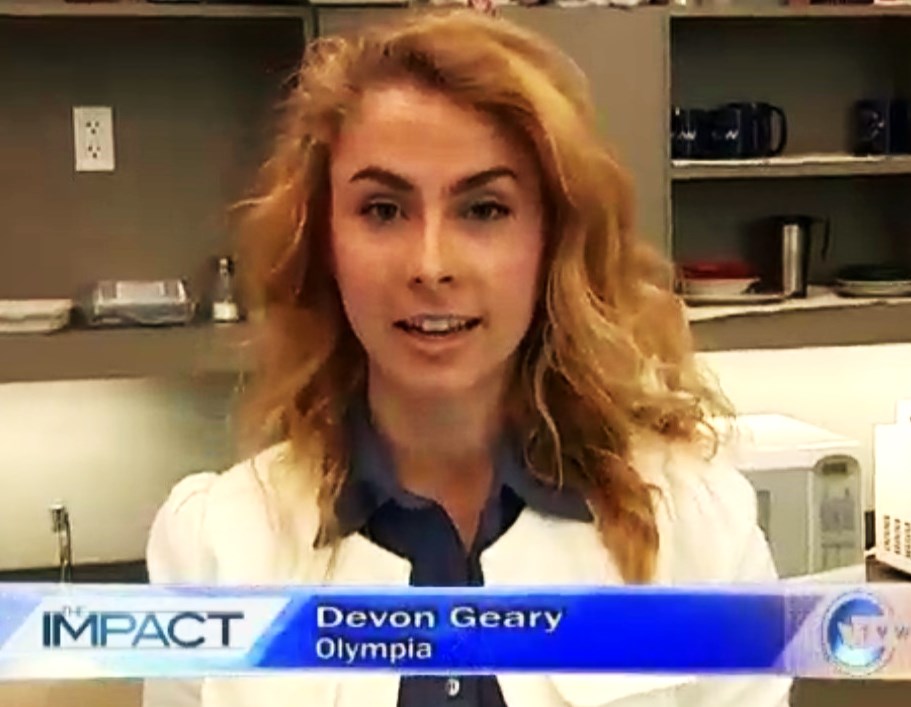 Position: Intern at TVW, mentored by TV host of The Impact Anita Kissèe, in partnership with the Olympia Legislative Reporting program, January to March 2013, Paid and for credit, 40 hours/week

“On one of the more exciting days, I would go in (maybe a little bit early) and we’d take the car onsite to someone’s house or to a scrap metal site and there would be a bill that would be affecting this site. So for example, I did a story on incarcerated parents and these parents were fighting to have judges look at their cases. The state will take away your kids after a certain amount of time if you’re not present, so this bill would make it so that the judges would look at incarcerated parents and say ‘oh, you’re in prison, so maybe I will extend your amount of time so that you can keep your kids.’ One day we got in the car, went to this lady’s house who actually gave up three of her children because otherwise the state was going to take them away and she’s fighting for this bill. And so we get B-roll (which is just like a tape of her showing pictures), I interview her, and then we go back to the office. I watch the tapes and come up with a script, and then maybe that day film my stand-up for it and write the package for what’s going to be shown on TV.”

Did you get to be on TV?

“Yeah, I did. I got really really lucky that they let me do that because for other programs they don’t let interns do that, so TVW is really special.”

“Mike Henderson (the Olympia Program’s coordinator) does a fantastic job at kind of roping in students and presenting this opportunity that they might not have noticed otherwise. And then he asks if you have a preference: Do you want to write? Do you want to do radio? TV?”

“My favorite part was creating something that I thought was my best effort and then having this pro, my mentor, dissect it and show me how to make it five thousand times better. That builds you as a writer so much to have someone…say ‘this is how we can make this better,’ ‘this is how we can catch the reader.’ I was totally print, I had never done broadcast before or written for TV and she helped me transition for being able to write for TV.”

“I might have to get back to you on that one, I don’t think so.”

“So she actually had me in her office, which if I was in her position I don’t know if I could have dealt with that – you’re this one man band and then you’ve got this intern sitting in the corner of your office and I had just as much space as she had. There were a few other students from the UW interning in the same building, but for different organizations, and then another intern from WSU for TVW. They were a riot. They were just down the hall, so that was great. Whenever I would walk out of the office, there’d be these people to crack jokes with and stuff. So it was a really relaxed and fun environment.”

“With journalism now, you have to have such a wide variety of skills. You can’t just know how to write and so going into this I chose television knowing I had no idea what I was doing because I wanted to add that asset. And so now I have that. I’m not perfect at it by any means, but if I enter into a broadcasting career, I can take a better stab at it than if I never would have done this.”

“I would say packages for sure. Interviewing law makers is nerve-wracking as heck, but after you’re done you feel accomplished. But at the end of that reel (below), I’m reading off a teleprompter and no one should see my first attempts – oh my gosh, it was mechanical, it was bad. So at the end I’m starting to warm up to reading and not looking like I’m reading and I’m telling you a story. It’s still monotone, it still needs a lot of work, but I’ve grown a lot in that arena so I’m proud of that.”

“For students, not only was it journalistically a mind opener, but my political scope is busted wide open. You learn so many details about the House, and the Senate, and bills and the whole process. It’s just really important because now I’ll watch CNN or a local television station and they’ll be talking about a bill and I’ll know what affects it can have on people and I know if it’s at a certain level in the legislature what’s going to happen. I think that’s really important and a knowledge that everyone should have. This internship was a steep learning slope – you needed to learn it and you needed to learn it fast because otherwise you don’t know what you’re talking about and that was really beneficial.”

“Honestly, no. I didn’t know that politics could be that interesting and it really can be. You’re hearing about House Bill 1254 and it’s about scrap metal or incarcerated parents and you go to this lady’s house and she’s crying on camera and you realize what the passing of House Bill 1254 would have done for her. And it hits home that it’s essential that we know about it so that we can help pass bills like that.”

What’s next for Devon?

Foreign Intrigue in Cambodia! “I’m just ecstatic, edge-of-my-seat excited. I will be working for a local paper in Phnom Penh called The Cambodia Daily.”