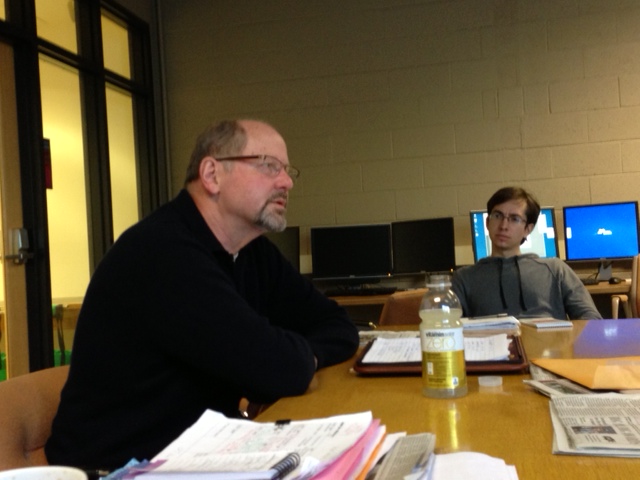 For alum Harry Anderson, returning to campus recently brought back memories of marches and protests against the Vietnam War.

Anderson, who graduated in 1967 with a bachelor’s degree in journalism, visited Karen Rathe’s News Lab – a required class for journalism majors – on April 23. He recapped his career journey, starting in the Communication building, then to the LA Times and later to PR jobs for a Hollywood studio and in health care. He now lives on Whidbey Island and works as an independent communications consultant.

Anderson considers himself a “walking museum.” He has experienced all the major technological eras in journalism, from the linotype machine and carbon copies to the modern digital age of Twitter and instant online news postings.

Originally from Tacoma, Anderson wanted to become a journalist for as long as he could remember. It was something his parents didn’t understand.

He described his time at the UW as unforgettable, with some events permanently “burnt into his memory.” He remembers walking out of a classroom and meeting a friend who would tell him that the president (Kennedy) had been assassinated.

“I remember we would protest to end the war, we would encourage students to write messages on the ground right in front of the HUB,” he said. “We were silently protesting and feeling like we were making a change. We certainly tried.”

After graduating, Anderson moved to California where he got a master’s in journalism at UCLA in 1972. During the spring of the same year, Anderson got an internship with the LA Times. This led to a journalism career there spanning 18 years, writing and editing for the business section and putting out a regular column.

In 1990, he was wooed over to the “dark side” – a corporate communications job at Paramount Pictures. At this time, he said he switched gears from a then-stable journalism position to a “rock-and-roll” kind of job where anyone could be fired at any time.

With all of these years of experience in both journalism and PR, Anderson discovered that they are not too different from one another.

“The processes are exactly the same,” he said. “You still need to know what the story is. In PR, you are responsible for telling their [corporation’s] stories. You keep asking a lot of people a lot of questions until you get to the truth.”

However, one difference he noted was that in PR you have to “put your best foot forward” and represent the company in a good light while maintaining the truth.

Anderson discussed the changes in the journalism realm. With the new technological developments, it will be harder and harder to find a job as a reporter, especially with print newspapers slowly becoming extinct and moving to the web. Even though he recalls it was always hard to find a job in the field, he acknowledged that today’s market is even more challenging for aspiring journalists.

The blurring of print and video journalism is the new trend, he noted, with more news websites switching to this kind of format. Journalists have to adapt and learn multiple skills, including photography and video, in order to stay in the market. But while online news might be taking over, Anderson still likes his print copy of The New York Times delivered to his home on Whidbey Island, where he currently resides.

Instructor Rathe noted that the future is not entirely grim.

“There are lots of cool possibilities outside of journalism with the skills you acquire here in the program, including PR,” she said.

At the end of the class, students went around the table and talked about why they decided to major in journalism. Answers ranged widely from dreams of becoming a sports writer and the love of telling other people’s stories to reporting on international issues, perhaps going into PR, and video and photo storytelling as their prospective jobs.

Rathe noted how these answers “reflect back the changes in the industry” during her years of teaching journalism.

“Just a few years ago, students would answer ‘I want to do print’ or ‘I want to do TV,’” she said. “What I’m hearing now is just storytelling – in whatever platform it is.”

Students were grateful to have such an experienced speaker come and share his journey with them.

“It was great to have a journalist who has gone outside the very narrow field and was successful,” said Thuc Nhi Nguyen, a sophomore journalism major and current sports editor of The Daily. “It is nice to know that what we learn here, we can apply to other opportunities out there.”

At the end, Anderson had some parting advice for the students.

“If you have the gene [for journalism], then go for it,” he said. “Don’t lose the curiosity. You have to maintain a sense of enthusiasm and curiosity in order to keep going in this business.”