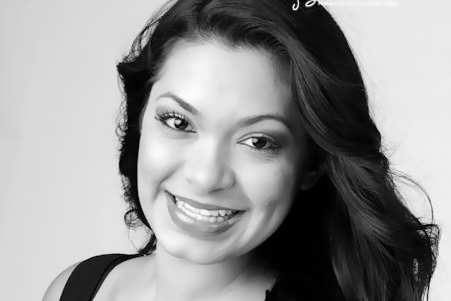 From a small town of about 5,000 people during peak fruit picking season, to the bustling city of Seattle, undergraduate Veronica Quintero has had to make her own dreams come true. Growing up in Mattawa in Eastern Washington, where the population is 90 percent Mexican immigrants, did not foster many opportunities, but she has made a name for herself and has learned to just make it happen.

Her parents met in Mattawa after emigrating from Mexico. Her mother completed second grade in Mexico and her father attended school until eighth grade. He began working right away upon entering the U.S. as a fruit picker, construction worker, and other odd jobs that didn’t require English skills or documentation. Quintero wasn’t always sure that college was an option for her.

“Growing up and seeing them work so hard made me realize that I wanted something different,” Quintero said. “I just didn’t know how to go about it.”

Without the resources that bigger schools had, Quintero wasn’t quite sure where to go to seek out opportunities. But when she heard the word college, she began to ask her teachers, “What is this college thing that you guys always talk about? Where can I go?”

“Finally in sixth grade I had this amazing teacher that really pushed me and I had her all the way through eighth grade,” Quintero said. “She just really put the idea of going to college in my mind and I feel like I needed that push.”

This led to her high school mission of getting to college. Quintero worked hard, learned about scholarships, and graduated as the co-valedictorian of her class and as a Gates Millennium Scholar. While complying with her parent’s wishes of staying in state, Quintero chose the University of Washington with all four years paid by the Bill and Melinda Gates Foundation, including three study abroad experiences.

“I’m really happy I chose Seattle and the UW,” Quintero said. “It’s been amazing and honestly I think that it doesn’t matter where you go, it’s what you make of the experience.”

Although she thought she would take the business path, David Domke’s COM 201 class changed her mind. She began to pursue a degree in Communication with minors in Spanish and Diversity.

Inspired by her freshman year roommate, Fabiola Viveros, who held the title of Miss Hispanic Seafair in 2009, Quintero decided to participate in 2011. She had done Junior Miss in high school (now called America’s Distinguished Young Woman), which is also a scholarship program, but figured this one would be “ten times bigger and better.” The pageant involves months of preparation with the help of Univision KUNS-TV and other workshops that became valuable to Quintero’s future.

“I didn’t so much have the intention of becoming Miss Hispanic Seafair since my tuition is covered and there is a very generous scholarship that comes with winning the title,” she said, “but more than anything I wanted to use it as a networking opportunity and as a way to develop myself, my public speaking and presentation skills, and personal interview skills.”

Quintero won Miss Hispanic Seafair in May 2011 and went on to compete for the title of Miss Seafair for the City of Seattle. Not knowing at the time how much historical value the pageant had for the city, she quickly learned as she was crowned the 62nd Miss Seafair in July of the same year.

“So here I was at the end of my summer about to leave for India for an exploration seminar, I had two titles and I thought, boy what did I get myself into,” she said. “I went to India, came back, and thought about what I wanted my focus to be during the year.”

Quintero participated in over 200 community-oriented events, all the while holding a part-time job on campus and being a full-time student.

“It was a lot of work and not a lot of sleep,” she said, “but it was so worth it and I would do it again in a heartbeat. I learned so much about the city of Seattle, about myself, and about the different communities that make up Seattle – life changing.”

During the times Quintero felt overwhelmed and like she just wanted to quit, her Miss Hispanic Seafair director Michelle Font (who is now her roommate) prodded her to keep going. Font won Miss Washington USA in 2007 and competed in the Miss USA pageant the following year. She now works for Boeing.

“The conversation would always end with ‘just make it happen,’” Quintero said. “Just telling myself to make it happen really helps to this day and I want other people to know that if they engrave those words in their mind, it’s a mentality that will take them far.”

Those words became the inspiration for her blog, where she tells the stories of her life and the inspiring people around her. Many of the events that she attends (and later writes about) stem from connections she made during her reign as Miss Seafair. One of those relationships led to Quintero starring in two commercials for Community Health Plan of Washington, which paid for her entire cancer treatment when she was diagnosed with lymphoma at age nine.

“I think [having cancer] is one of those experiences that will keep evolving as I grow,” Quintero said. “Even though it happened when I was nine, it’s still very vivid in my mind. I have scars and I was poked so much that I have these little memories that are constantly reminding me of that experience.”

Although Quintero’s friends jokingly criticize her for being busy and taking on more than she probably should, that’s just how she wants it.

“I love being busy because I think that we’re here for such a little amount of time, why not take advantage and do as much as possible,” Quintero said. “It sounds a little cliché, but [cancer] really does make you realize that just waking up each day is a blessing.”

Participating in three study abroad programs is one way that Quintero is not wasting time. She began in Tahiti after her freshman year, where she studied mixed race experiences for a month. Although she enjoyed the warm weather, she decided she wanted her next trip to challenge her “as far as everyday luxuries that we take for granted.” While being accepted to two programs, the Rwanda trip fell through, so she went to India to study women’s leadership.

“That’s where I learned more about the impact the Bill and Melinda Gates Foundation is having all over the world, but specifically on people in India,” she said. “We met with leaders from all spectrums of society from the banking community to women who are illiterate that are uplifting their society.”

Although the differences of language, culture, and religion were evident, Quintero chose to focus on the similarities.

“It allowed me to realize that while we may be different, there are so many values that connect us to humanity,” she said. “We all have the same concerns, we all want to succeed, and we all worry about our family. To live that and realize that without saying a word to someone was so powerful.”

After India, Quintero decided she wanted a quarter-long experience, so she applied to the Communication trip in Rome. Although learning the language was difficult because Spanish is so similar to Italian, she enjoyed being more of a seasonal traveler, rather than just a tourist.

Currently, Quintero is an intern at KCTS9 in the community engagement and education department. While already loving it, she is realistic about job searching for after she graduates in June. She is interested in doing work with the Bill and Melinda Gates Foundation as well.

“I feel like I owe them so much, but also I want whatever I do to have an international focus,” Quintero said. “I want to continue traveling all around the world and mixing communications and community work. Whatever that job is, I hope to find it.”

While she was invested in her education, she recognizes those people that were invested in her. When visiting her hometown, she advises students there to look beyond Eastern Washington. She was part of the Dream Project for a while as well, seeing the same issues arise in Seattle as she faced in Mattawa.

“There are still a lot of disadvantaged students here who don’t know where to access their resources, or maybe their teachers aren’t invested, or their parents don’t push them to seek out those resources,” Quintero said. “When they would tell me their story, I would say it’s valid, but it’s not an excuse. They were telling me my story and if I can do it, you can do it.”

Moral of this story: make it happen.