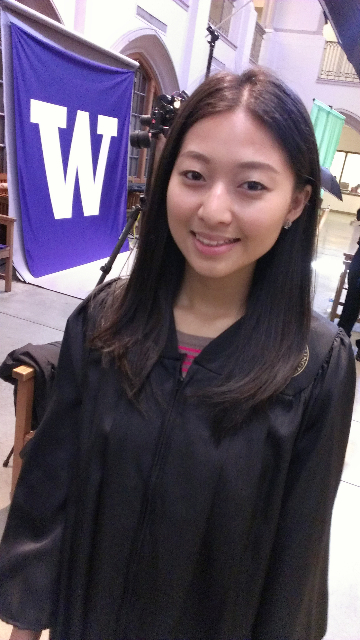 Position: Marketing intern at Comcast Arena at Everett, January to March 2013, for credit, about eight to 12 hours per week

“As a marketing intern I worked with the marketing manager, so I reported to him. My daily duty was compiling extensive grassroots cross-promotion partnership contacts for upcoming events. We did Phineas and Ferb for Disney, Rhythm of the Dance, Sesame Street Live, Cirque Zuma Zuma, and others. I would set up a excel spreadsheet to target potential partners within the Everett community (family-oriented restaurants, schools, etc.) to promote our events to the public. I called and reached out to more than 50 local businesses and restaurants for cross-promotion opportunities. It was a challenge at first because I had never done that before, but every yes made 10 no’s worth it. Other than that I did some Photoshop and designing for the posters too.”

Through the Thursday internship sessions.

“I saw the posting from Victoria Sprang and had wanted to go into marketing and PR. When I saw the marketing internship, I searched Comcast Arena and a lot of their clients are Disney related. I love Disney, a big fan; my name is Ariel. So I met with the manager and we had a great talk. He reached out to me after a few weeks. Even though I wasn’t looking for an internship because I had a part-time job and was taking 18 credits, he said we have an opening and I think you’d be a great fit, so I decided to do it.”

“My manager gave me a lot of flexibility about voicing myself. As an intern I felt like I could talk to him at any time about any ideas. I’m still in contact with him and I think that’s really valuable for both of us.”

“Toward the end of my internship my manager asked me if I knew what EDM was. I was like, “What? Ya, it’s Electronic Dance Music!” I was surprised because they aren’t family oriented and EDM shows usually go to venues near downtown Seattle, so he said he really needed my help because I was the youngest in the office who understands EDM. My manager asked me to outline marketing and social media campaigns because he hadn’t worked with EDM before, so he gave me a lot of control for this project, which was really fun.”

“When the EDM project came around, everyone in the office said, “Why didn’t I know you before?” It was really overwhelming as my first office setting internship with people that had a lot more experience than me. I was really shy at the beginning just working in my cubicle and I didn’t show my personality enough. I feel like a skill in the office is to build personal relationships and if I were to go back, I would try to do that earlier. They were all really nice, I was just too intimidated, but the EDM project was the turning point.”

“The administrative office is in the arena at Everett, so some people walk the arena at lunch and watch the Everett Silvertips hockey team practice. I think there are 15 full-time employees working in the administrative office and it was just a regular office setting with a reception area, the departmental directors have their own offices, and then the rest of the managers and interns have cubicles.”

“Before, I was struggling with whether to do marketing or PR thinking that they were pretty much the same, but after I did the marketing internship I could see the difference. The skills are similar with communication, writing, and research, but PR contains a storytelling factor, whereas marketing focuses more on numbers and business aspects. Now I know that I really want to go into PR. However, I don’t regret doing the marketing internship because it took my skills to another level and directed me to PR.”

What’s next for Ariel?

“On May 1, I started a PR internship with the Classical KING FM 98.1. It’s a nonprofit radio station and it’s already been such a good experience. Last Wednesday was the start of their quarterly spring fund drive. You see so many people who are so passionate about reaching one goal and the office is super cool. You see people receiving calls, getting more money, reaching out to the community and it’s for the benefit of spreading awareness of classical music to the public. So what they do is for a good cause and you see a really motivated team.”

(Ariel found out about this opportunity through Internship Thursdays as well.)