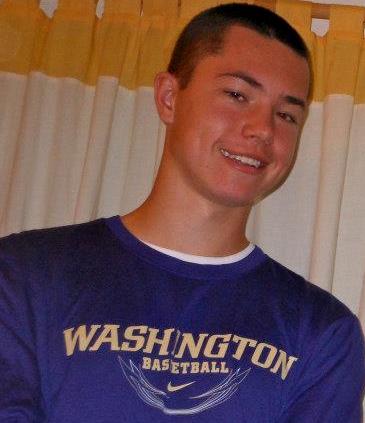 Justin Lester, journalism student and softball beat reporter for The Daily, found himself trapped in a hotel bathroom while the “widest tornado in American history,” according to The National Weather Service, swept through El Reno, a city just 30 miles west of downtown Oklahoma City. He was on assignment to cover the UW Softball team at the Women’s College World Series as winds up to 295 miles per hour damaged a 2.6 mile wide and 16.2 mile long path. The twister, along with subsequent flooding, killed 18 people and injured more than 100. Nonetheless, the sun was shining the next day and the teams were ready to play ball.

Here’s a glimpse of Justin’s experience:

Q: Were you expecting any of that weather going into the trip?

Justin: “Not at all. I heard a week earlier that there was a tornado in Moore, Oklahoma so it was kind of in the back of my mind, but I never thought that when I was going on a trip to cover sports that I would have to deal with something like that. It was definitely an eye-opening experience. It was just a horrible feeling in your gut when you’re watching the news and you see that there’s a huge storm coming right toward where you are. It was getting really emotional when the storm got close and it just gives you a different perspective on life a little bit.”

Who were you with at the time?

“I was with the photo editor of The Daily, Josh Bessex. I traveled alone on Wednesday to get there and then he had a meeting on Thursday, so he came Friday morning to meet up with me. The hotel was about five miles from downtown [Oklahoma City] and we were the only two people that we knew. The UW softball team was in a hotel in downtown and so the two of us were hunkered down in a bathroom on the first floor of the hotel because there was no underground, which is obviously the safest. They basically told everyone to be on the first floor and as far away from glass as possible. A lot of people were under their mattresses and we were under our pillows in these stalls and that’s the best we had.”

Was everyone on the first floor of the hotel?

“Pretty much everyone was. The crazy part was that the people working at the front desk were actually really lackadaisical about it and they were just business as usual because I guess it happens a lot in Oklahoma. They have to just keep doing their job and keep everyone as calm as possible.”

How long were you hunkered down in the hotel?

“About an hour I would say, and I was actually on the phone with my dad the whole time. I don’t know how I had phone service during that, but I was talking to my dad and I actually said my goodbyes to my family. That’s how serious it was.”

Did you grow up around Seattle?

“Yes I did, so I’ve never seen anything like that!”

Was there devastation around where you were?

“A little bit. My hotel was made completely of concrete, so a little bit of the roof was torn off and parts of my window were cracked. My floor was really wet when I got back up there. There wasn’t that much damage around my area, but when I was driving to the airport to go home, I saw lots of trees and lamp posts on the ground. So there was a good amount of damage.”

How did covering the Women’s College World Series go after the tornado passed?

“It was definitely nice to be alive! But it’s been really fun covering the softball team all year and just being in a place like that with a huge stadium with all the best teams in the country. ESPN was there to cover it, and it just makes you feel really good about how hard you’ve worked the whole year. It was awesome to be able to cover a team like that.”

What did you learn from a journalism standpoint?

“Well obviously the main part of the trip was the tornado, but one thing that I definitely learned was how to write on a deadline. For example, on Sunday they had two games. They had their first game and if they lost they would be done, but since they won, they played again a few hours later. So I had to get a story up about that game and I had to get the press conference up. After their last game on Sunday night, I had to get a story up within twenty minutes of the last pitch. It taught me to know what I was going to say before I started the story, so I had to basically start carving out my article during the game just assuming what was going to happen.”

How do you think it will prepare you for future assignments that you may get?

“Being at a place like that, it’s a good thing to have on your resume and it’s a good thing to tell people that you can cover a tournament like that at such a young age. Now I know what the pressure is like and what it’s like to be at such a big stage. It gives me confidence when I say, ‘I’m going to cover another UW sports team next year’ to know that I can write on a tight deadline and I know something about a special tournament like that.”

What do you hope to do as a career in the future?

“I would love to be a sports writer, or do anything that involves sports. I had an internship at the ESPN Seattle radio station last quarter, and then this summer I’ll be at the Seattle Weekly doing sports and news and also at Sports Radio KJR. Athletics are my passion, but I would be open to anything with writing or sports.”

Is there a sport that you are more drawn to or that you used to play?

“I used to play basketball and soccer in high school, so those are definitely my favorite, but I love all sports.”

Justin took this video of the tornado aftermath (check out the lightning bolt at 0:24). This video shows the water level outside his hotel. Visit The Daily’s website for photo galleries of the tornado (photos by Joshua Bessex) and the Women’s World Series (photos by Justin Lester).