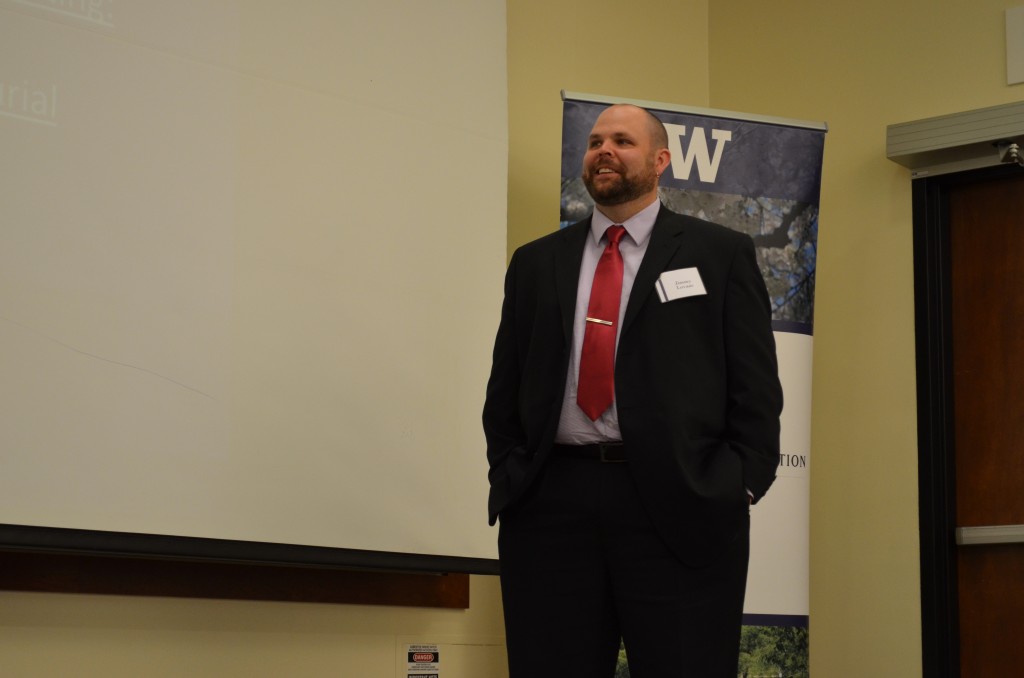 Jimmy Lovaas is a retail manager, poker dealer, and bouncer turned flight attendant, who also dabbled in newspaper delivery, selling sewing machines, and being a clown at kids’ birthday parties. Never a set path, he has now found an interest in journalism. But he said he would never have been a “nearly 40-year-old, balding college student” if it weren’t for cancer.

“The most important thing that’s ever happened to me in my whole life is getting cancer,” Lovaas said, “because if I wouldn’t have gotten cancer, then I would not be where I am today.”

Married for a few years with a daughter that was almost one-year-old, Lovaas was diagnosed with non-Hodgkin lymphoma when he was in his early twenties. He underwent five weeks of radiation treatment.

“Once I realized that I was going to be fine and treatment worked out, then it was sort of an awakening like maybe I should reexamine what it is I have planned for my life,” Lovaas said.

Shortly after, his mom got sick and passed away, which delayed his recovery a bit, but a couple years later something clicked.

“By the time I was 30 I said, ‘Ok, I’m ready to make a change,’ but I didn’t know what that was,” Lovaas said. “I went to go work as a flight attendant knowing full well that I was not going to do that for the rest of my life and that it was just going to be what I did until I figured it out.”

Lovaas worked for Alaska Airlines for about five years and thought school may be in his future, but he never thought he was quite bright enough to go to college. He struggled through high school as a kid, not applying himself to get good grades, but (now remarried) his wife helped him overcome the negative attitude that he couldn’t do it.

Lovaas began at Shoreline Community College, where at first he was interested in the pre-law path.

“I thought I would like to do something where you have an impact on society in some way and maybe law school would be a good way to do that,” Lovaas said. “So I started thinking I was going to major in political science and I got really into economics classes.”

He quickly realized that his writing skills were lacking and a light bulb went off when a student came into one of his classes to pitch working for the school newspaper called Ebbtide. He began doing general reporting and worked his way up to becoming the Arts and Entertainment editor and holding a position on the Board of Publications.

Although he was more prepared to major in journalism, Lovaas still thought he would do political science or Law, Societies, and Justice when he transferred to the UW. It wasn’t until a conversation with his newspaper advisor at Shoreline that he began to consider the Department of Communication.

“I was complaining about this really tedious poli sci class that I had taken and she said, ‘You know, you’re pretty good at this writing stuff. You might give it a thought,’” Lovaas said.

While being a self-proclaimed non-planner who just sort of goes in the direction he thinks he should be going, there is something about journalism that draws him in.

“It’s not like showing off, but I like to know stuff. And if I know stuff, I want you to know stuff,” Lovaas said. “I feel like my whole life I’ve always been a storyteller – listen what I did, listen what happened to this guy. But my education was nonexistent so I just assumed that storytelling could not be anything but oral.”

At the UW, Lovaas learned that it isn’t as hard as he thought to put his stories down on paper. He began working for The Daily as a crime beat reporter and then was chosen to do the Olympia Legislative internship last winter, writing for The News Tribune in Tacoma.

“I’m really happy about the work that I did at the Olympia Legislative, not because it’s the most interesting stuff that I’ve ever written…but I wrote about the payday lending bill, which no one else covered even close to the degree that I did,” Lovaas said. “I just had a gut feeling that it was going to be important and was going to come up again.”

A few weeks ago, the payday lending bill was brought forward and Lovaas got an article printed about it in The Seattle Times, where he is now a digital reporting intern writing for the Today File. He also won a Pioneer Award at the 2013 UW Department of Communication Celebration of Excellence for being the most productive member of this year’s Olympia internship cohort. Lovaas was asked by the News Tribune to stay on and freelance until the end of the regular session in Olympia, and into the special session.

While focusing on crime for The Daily and politics for the News Tribune, Lovaas said he is attracted toward general assignment reporting because he gets to write about a variety of topics.

“I like going from one thing to the next,” Lovaas said. “Yesterday I wrote about a baby seal in the morning and then later I was interviewing family members of a lost and maybe dead hiker. Today I wrote about a different missing hiker, surprisingly enough, I covered a pedestrian collision in North Seattle where somebody almost died, and then I also wrote a bit about a state representative who is trying to break into acting and posted some photos of himself all buff and ripped up on IMDb. So I like that sort of pick a direction and you don’t really know which way you’re going.”

Possibly even more intimidating than his new writing endeavors was starting college as a 35-year-old in a crowd of 20-somethings. Although he hated it at first and did a lot of complaining to his wife, his training as a risk manager (the “head bouncer with a clip board” at the White River Amphitheater) taught him to run toward things that scare him, not away.

“I would try to involve myself with the young’uns, so I joined the political science and economic club, worked at the newspaper, started doing a lot of drama stuff at Shoreline,” Lovaas said, “things that looked scary and only for the twenty-year-olds, but I would just do it anyway. After a few quarters of doing that I figured out that the nobody cared how old I was except me.”

Age may not be a factor in most cases, but there is one thing he is glad about: “I’m graduating before I turn 40 and before my daughter starts college, which is good because I did not want to be eating lunch in the quad with my kid. That would be awkward.”