Alisa Reznick traveled to Jordan over a month ago to work for the Jordan Times as part of the Foreign Intrigue program. Below is an update from her experiences in an unfamiliar country: 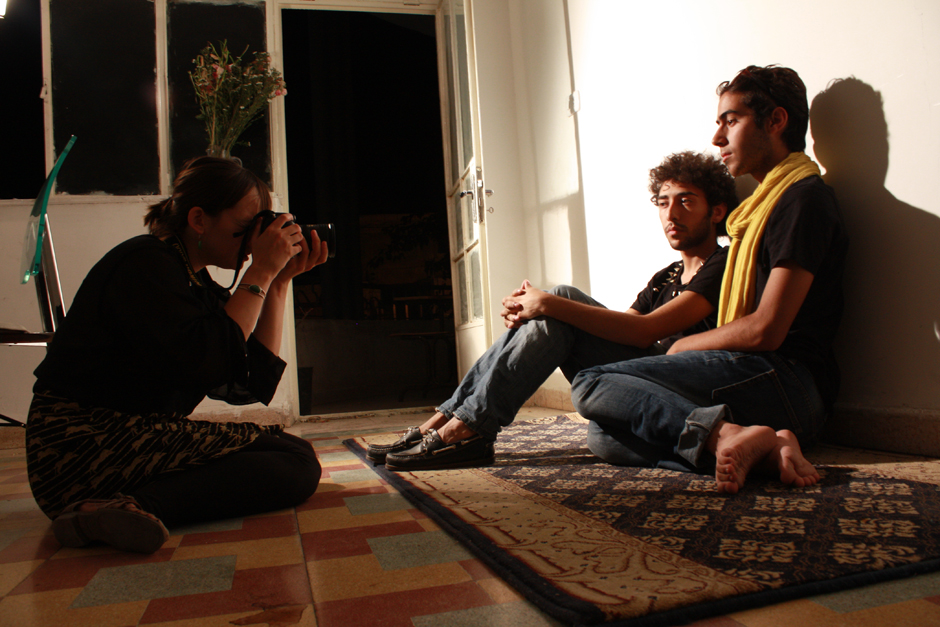 “This photo was taken during a photo shoot for a German magazine I worked with toward the beginning of my stay (I am the photographer in the photo). When I first arrived in Jordan, I stepped into the start of the holy month of Ramadan. The holiday is an interesting mix that makes for an Amman that’s both more lively and exhausted. On one hand, most Jordanians are fasting from sun up to sun down — and in the middle of July, that means about 14 hours without consuming anything.

As for reporting, the month also means most people aren’t up for an interview until after sunset, and government offices close their doors after 2 p.m.

On the other hand, intense summer fasting brings an even bigger Iftar (the meal to break fast at sundown). What begins with a date or two as the sun sets becomes a colorful mix of classic dishes, and the entire city wakes up. Schedules are reversed, and the sound of fireworks and rooftop parties can be heard until three in the morning.

In a lot of ways, Amman feels like a city somewhere in Europe. Italian-style cafes have popped up all over the city, and a large base of expats means English speakers aren’t so hard to come by. Still, with a population that’s around 97 percent Sunni Muslim, things stay pretty traditional — especially outside of Amman.

Of course, being a foreign female reporter in the region has its challenges. A colleague and I decided to go to the southern city of Ma’an to look into the upcoming municipal elections. Unlike Amman, Ma’an is a city where expats don’t exist, and English won’t be heard in markets. Nearly everyone that lives in Ma’an was born and raised there.

With the cheapest rental car we could find, we braved Amman’s notorious traffic and headed south. Once in Ma’an, we realized we were the only women driving, and the only ones without hijab.

From the stories, we expected chaos, but instead we found some of the most generous people I’ve met while on my stay. From English translation, to overnight accommodations, to arranging interviews, everything was taken care of by the one source I’d called the morning we left Amman. If there’s one thing Jordan is rightfully famous for, it’s the generosity of its people. And Ma’an was absolutely no exception.

Like the trip down south, Jordan is constantly surprising. During the last month and a half, I’ve discovered gypsies from Turkmenistan, an emerging LGBT community, and an impossibly complex refugee situation. Most importantly, I’ve found more kindness from strangers than I thought possible, and a country that can’t easily be labeled as anything other than its own, unique blend of modern and traditional, old and new.”

Read two of Reznick’s articles for the Jordan Times here and here.