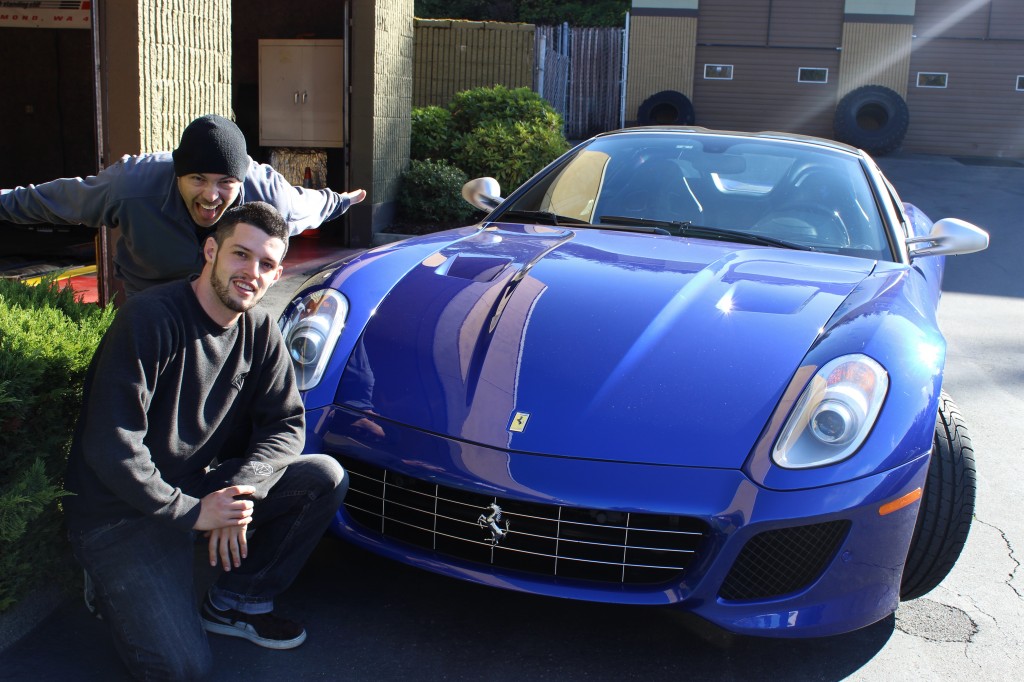 Garrett (kneeling) and Marco pose next to a 2013 Ferrari 599 SA Aperta, which came into the shop to be recorded for Microsoft’s new racing game Forza Motorsport 5.

Some may say recent graduate of the Communication Department Garrett Nelson (B.A., 2013) didn’t take a typical path after he walked across the stage and accepted his diploma. He didn’t get a job at a public relations firm or a major marketing company, but instead teamed up with a former Microsoft employee to run a high performance automotive shop.

“You need to do what you really want to do,” Garrett said. “You may need to humble yourself in what society tells you are the right things to do. People may say you need to get a $60,000 plus salary job and take these steps to do it, but that can also lead to not liking what you do or who are you.”

Garrett and Peru-native Marco Yaya are in the process of bringing back to life Dyno Authority – a high performance automotive tuning, custom fabrication and modification company. Originally opened in the late 90s, the shop closed in 2010 when the person running it left. It became a storage space until Marco was getting his wife’s car worked on in the shop across the parking lot and was asked about running the dyno. Marco had just quit his job at Microsoft – a company he had worked at for nearly 18 years.

“I’m 44 now,” Marco said. “I went to Microsoft right out of college and it was wonderful and is a great company to work for, but you have to realize that there is such thing as balance in life. If you don’t find your own balance, life will push you to do it and sometimes not in the nicest of ways.”

Marco went to college at DeVry University in Texas for a technical degree. He has always been passionate about cars and especially motorcycles, which he used to race when he was a kid. After being asked if he could run the dyno shop, he went to Arizona to attend an advanced tuning program at EFI University.

“I’ve been tuning cars for a long time, but I had never done it for anybody else,” Marco said. “If I blew the car up, I would just get another one, but when you are working with customers it’s a different story.”

While Marco covers most of the tuning and graph data, Garrett is the one-man communications team, leading the way in marketing, public relations, social media, promotion, and advertising. Garrett used to be a customer at the old dyno shop, which is how the team came together.

“The most I’ve learned is the amount of time it takes to run a full marketing campaign for anything,” Garrett said. “I’ve worked for promotions with radio and newspapers, but they have a whole team. I have lists and lists of everything that I constantly have to do…so it’s a little different when you have it all on your plate and you’re kind of flying by the seat of your pants.”

Garrett is also able to help Marco in the shop as he has had an interest in motor vehicles for a long time, and has worked as a lube tech to a service manager and everything in between. He has built three cars since high school and said he got the “bug” for working in automotive, so when the opportunity presented itself, it was too good to pass up.

“It was really just taking a leap. I’ve always wanted to do the high performance thing opposed to just the repair and basic maintenance,” Garrett said. “Now I have the free time, I’ve done all the schooling, let’s try it.”

Dyno Authority will be teaching some tuning classes at the shop in Redmond through EFI University, open to anyone interested in learning about tuning and how to use the Dyno. Beginning and advanced hands-on classes will be taught on February 8 to 10, 2013.