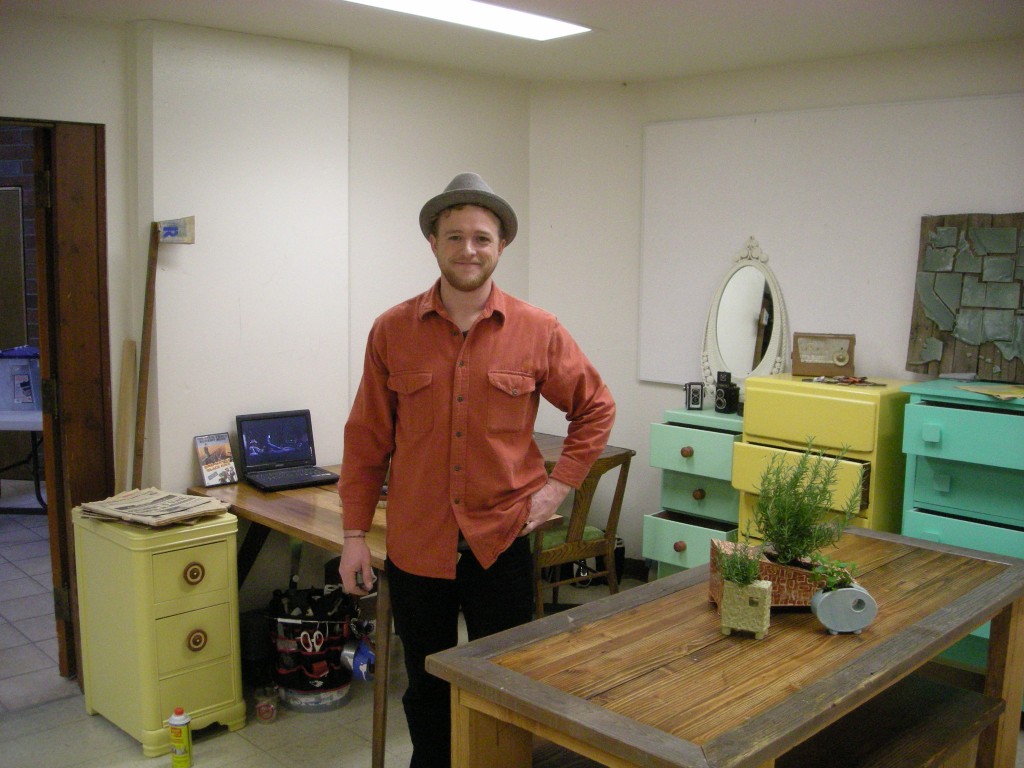 Born in Wyoming and spending his high school years in Montana, UW student Cory Roberts ventured away from the country to go to film school in the big city. His path has been far from linear as he has interests and skills in many areas, but deciding to work toward a degree in communication has allowed him to explore every avenue.

“I chose communication because it seemed to be a really broad category that covers a lot of ground,” Roberts said. “Whatever you carry with you in terms of your own individual toolkit, you can use the communication platform to find a niche to fit yourself into. I’ve got a lot of different tools in my toolkit, so I felt like this was going to be the degree that served my purpose the best.”

Roberts’ tools include sound mixing, boom operating, filmmaking, ceramics creating, wood working, being a radio DJ, teaching, music making, cooking, and more. Although participating in drama club and speech and debate in high school, he discovered that he preferred being behind the camera and started shooting a documentary at age 15.

His passion for filmmaking brought him to Seattle Central Community College where he took film and video communications courses. However, after meeting a group of people and being offered a chance to be in the film industry as a sound mixer, Roberts decided to put all of his resources into learning how to mix sound.

“I mixed that film and it was accepted pretty politely by the public,” Roberts said. “It was called ‘Bullets Blood and a Fistful of Cash’ and was a big reward for dropping out of film school. It got picked up by a small distribution company, is on Netflix, and was in Red Box.”

From that project, Roberts began working on another film that came into town from L.A. as a boom operator and started to form solid relationships with professionals in the industry. He worked on six feature films and dozens of short films and commercials, but then things changed.

“Intrinsically I’m attracted to film and art, but once you start to get paid for it, it starts to lose its value,” Roberts said.

Roberts had to leave the area for a period of time and upon returning to Seattle decided to switch career paths. He worked for a large-scale construction company for two years while taking night classes at South Seattle Community College. Realizing that he was going to have to quit his job if he wanted to take school more seriously, Roberts created a position in the public information office at the college to promote events, shoot videos, and distribute content around campus.

“I built a community there and was very connected, so when I transferred to the University of Washington, I knew that in order for me to be a successful student, I had to be plugged in somewhere,” Roberts said. “I’m a little bit older than most students, so it’s really easy for me to leave and stay off campus.”

Roberts applied to become ASUW’s Off Campus Housing Affairs Assistant Director and when the Director stepped down after one quarter, he became the Interim Director for two quarters. Realizing that he wanted to grow more professionally this year, Roberts began working for El Centro de la Raza, a Latino community center on Beacon Hill.

“I grew up in these agricultural communities and, in Wyoming specifically, there are a lot of migrant workers that come at different times of the year, so I grew up around large Latino communities,” he said. “I want to teach art in a community, not necessarily in a school district. It’s easier to teach people crafts and trades through the public setting – there’s not as much paperwork, it’s less formal, and more productive.”

An artist at his core and a third generation carpenter, Roberts has many skills to offer. He even owns his own small furniture business called Renovated Furnishings.

“I just make things and then sell them,” he said. “If I’m doing something that I like and I’m just producing, I don’t need to be rewarded for it. I’ll sell a lot of my things below market value because it’s not about the money to me, it’s about the craft.”

Roberts said he’s like an Australian shepherd – a high energy animal that is used to running all the time. Right now, you may find him working on his latest documentary about a landfill on the Makah Indian Reservation in Neah Bay, behind the mic for his show on Rainy Dawg Radio called Mixed Tape Monday Nights, or figuring out the beginning stages of a deli counter he plans to open in his hometown of Powell, Wyoming where his grandparents have resided for 60 years.

“I’m not trying to find a perfect career,” he said. “I’m trying to find a career that allows me enough time to do the things I’m genuinely interested in – a job that is stable and consistent, that way I can plan my life around it.”

Roberts was recently asked to be a board member for the Seattle Tenants Union, organizes a community “Cake Walk” at the Russian Community Center in Capitol Hill every January, and is a mentor to many cousins and young people already. In any case, he is always looking to give back.

“I want to gain enough credibility to be a social influencer – whether it’s just about learning art, learning a trade, or learning that there are other paths,” he said. “I got to do things that interested me when I was young, but those opportunities aren’t necessarily around for the next generation of students. I had a lot of positive mentors growing up and that’s who I want to become for the youth of tomorrow – to create the opportunity for them to explore what they are truly interested in.”