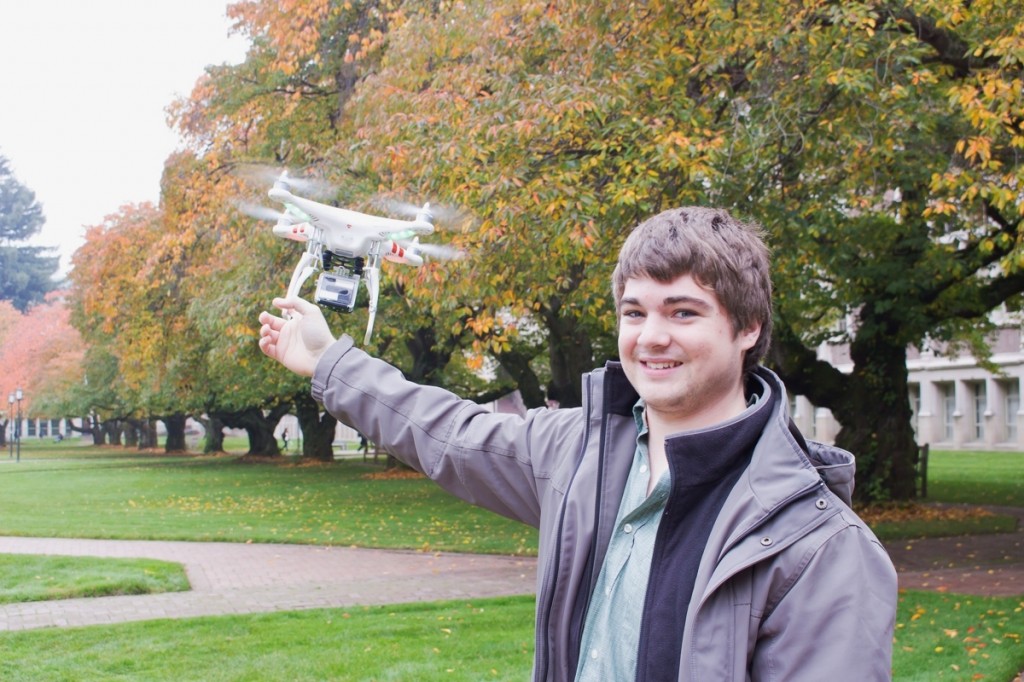 Stuart Marlantes demonstrates that the device pulls back when he tugs on it to maintain stability. Photos by Erica Thompson

What is that? How much does it cost? How does it work? How long have you been flying it?

These are all common questions aimed at senior communication student Stuart Marlantes as he takes out his newest photography and videography contraption to the heights of Seattle. It’s called a multirotor aircraft and it carries a GoPro to take wide angle aerial shots of whatever is underneath.

“I always love answering those questions because it’s cool seeing people enthusiastic about this technology, as opposed to afraid of it,” Marlantes said.

Marlantes started at the UW as a computer science pre-major before switching to communication, bringing his technical background to filmmaking and new media. Although the job prospects may be lesser, he said, “You just do what you love, right?”

As a fan of extreme photography and videography, Marlantes began researching what’s next for technology in the filmmaking space. He found multirotor aircrafts – one’s that have four, eight, and even 16 props to hold big cinema cameras. He decided to start small with a quadcopter and adding some parts of his own, like an anti-vibration mount that keeps the camera from shaking with the rest of the aircraft.

While the cost of the aircraft, the GoPro, and the additions added up to around $1,200, he said it was well worth it and hopes to someday save up for a larger one that can hold a DSLR camera. He has taken photos for UW Student Life, The Daily, and the UW in general for occasions like ESPN GameDay, Fall Fling, and construction projects on campus.

“I didn’t think there would be as much of a positive reception to it as there has been,” Marlantes said. “Just coming here, I was 15 minutes late because people were asking me questions.” 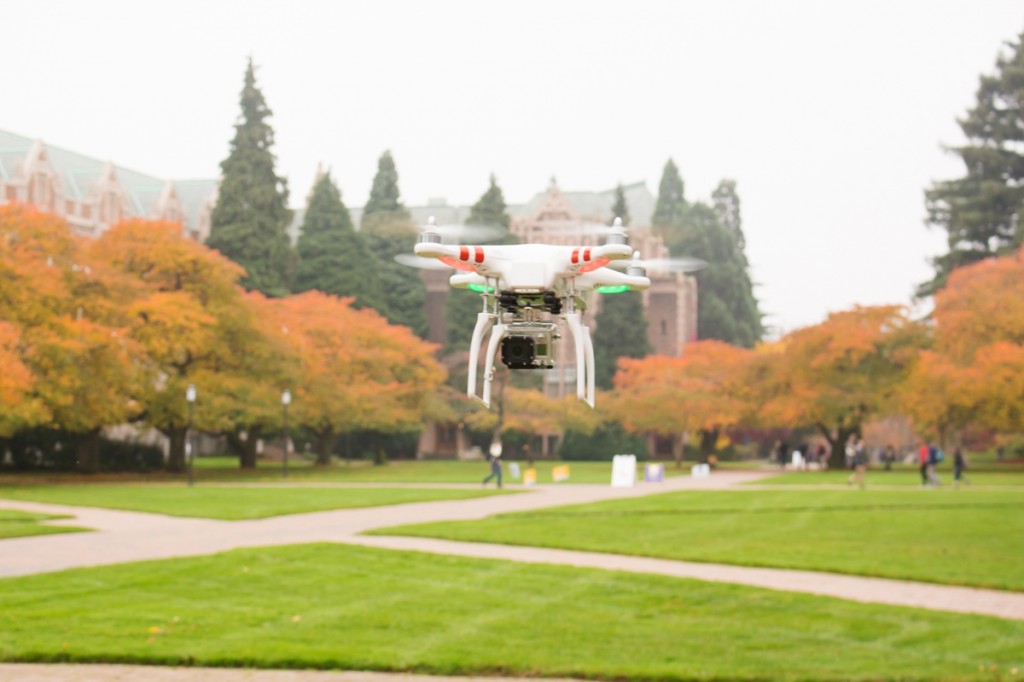 The machine can fly up to 50 mph, snapping a photo every 2 seconds with a time lapse function or a video. An indicator LED light signals battery level and the number of satellites in the area based on combinations of color and number of blinks. While many news organizations are aware of these devices, they have not yet used them efficiently and the Federal Aviation Administration (FAA) hasn’t figured out how they would like to regulate them for commercial use.

Marlantes has been flying his GoPro around since last summer to heights several hundred feet, but more recently he got scuba certified and has been taking it 60 feet underwater to the depths of the Puget Sound. People may tell him that he needs to know what he wants to do after graduation in June, but Marlantes is content with his interest in many areas.

“I think it’s a good thing to like so many different things so I can be happy working anywhere in that spectrum,” Marlantes said, “and that’s the beauty of being a communication major.”

In addition to photography and videography, Marlantes composes music, was the first official social media manager for The Daily, built a social media branch of a small marketing company from the ground up, and even used to be a radio DJ in Centralia for Live 95/KITI.

“I’ve been told over the course of my life, probably since middle school, that I have a voice for radio,” he said.

Marlantes said he would love to get back into radio someday or some sort of voice acting, but it is a difficult field to enter. Right now, he is keeping his options open – but you will surely see (or hear) his next creative adventure in the future.

Check out his website to see his latest adventure: stuarticulated.com