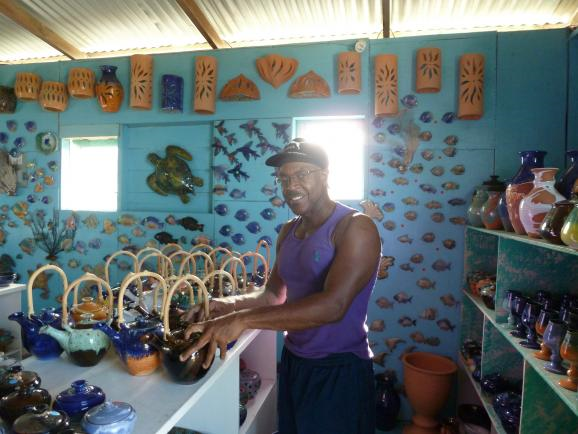 This past summer, a group of students studied abroad in Barbados with Communication Professor Ralina Joseph. Sisters Ann and Sarah Kane were two of those students, who were also visiting family for the first time. They found one compelling story on Chalky Mount, a small village famous for its pottery.

“I had wanted to put something together to document my time in Barbados, but I was overwhelmed with the amount of options for recording,” said Ann Kane, a senior in the Jackson School majoring in International Studies. “My sister was doing a project on Chalky Mount for the study abroad program, and I went along with her and recorded just so she could have it. It ended up being the most complete interview I got, so I decided to put it together as a story.”

Ann was collecting audio for RadioActive, KUOW’s youth media training program that teaches youth ages 16 to 18 how to produce radio stories. After students have completed the initial workshop they can produce shows for the monthly podcast, which Ann created for September. She now works as an assistant for the program.

Ann’s story can be found here – her individual story begins at 15:45, but she is hosting the entire show, which takes listeners to Chennai, Brussels, and Barbados. Although she is not sure yet if she wants to be a journalist, she said, “but I intend to keep producing stories in whichever job I end up in.”