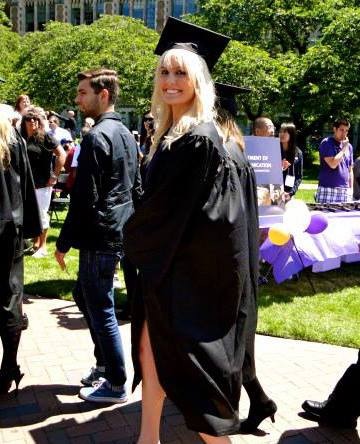 Kirsten Johnson graduated with honors in June 2013 with a degree in Journalism. With several internships under her belt, including positions at the Seattle Times, The Issaquah Press, and NBC News, Johnson moved to eastern Idaho where she is working as a reporter for a daily newspaper called The Idaho Falls Post Register.

We caught up with Kirsten to learn more about how she landed a job right after graduation and what she plans to do next.

Explain your typical work day: My typical work day is unpredictable. Some days I’ll be out on an assignment for the better part of the day, and other days I’ll spend mostly at my desk. Usually I’m juggling multiple stories at once. I talk to about 10 different types of people in any given work week. For example, one minute I might be interviewing a government official for one story and an hour later I’ll be at an elementary school talking to kindergarteners for a different story. Working as a reporter is a very deadline driven job which also adds an element of stress to each work day.

How did you find the job? I found my job on a website called journalismjobs.com. I applied to several dozen jobs posted on the website, and also a few posted on Craigslist. I kept my options really open as far as location and type of position; I was really up for anything. In June, I’d heard back from two jobs. I interviewed at both and was offered my current position a few weeks before graduating.

Do you have any tips on finding a job for those still in school? Apply to as many jobs as you possibly can. Apply to any and every job online, ask around, do whatever it takes. Don’t get discouraged because, especially with journalism, you probably won’t hear back from 90 percent of the jobs you apply for – even with a perfect resume. On that note, hone your resume to perfection. Have a communication professor you respect take a look at it. Take it to the career center. Have a solid cover letter. If you’re applying for a reporting position, your clips are also really important. Choose your best clips carefully.

What is the single most important thing to do while in school to prepare for the real world? Go after internships. Especially if you’re a journalism major, because journalism is one of the most competitive industries and a strong resume that includes several internships will set you apart from other applicants. If you’re lucky, a good internship may also help you land a job after graduating.

Now that you’ve had some time to reflect on college, what advice had you wished you received while in school? Now that I’m in the “real world,” I miss being able to seek the advice of experienced UW faculty members and seasoned reporters at my internships. Take advantage of that while you can still play the “student card.” Starting out in the real world is really tough and has been a big learning curve for me. Ask the dumb questions now while you are a student and keep notes from classes that were relevant to your desired profession – you never know, you just might dust off your old notes a couple years down the road.

Where do you hope to be in five years? In five years I hope to be at a larger newspaper or media outlet doing essentially the same thing I’m doing now. Being a reporter is just a really fun job. I get to tell stories for a living. I feel really lucky.