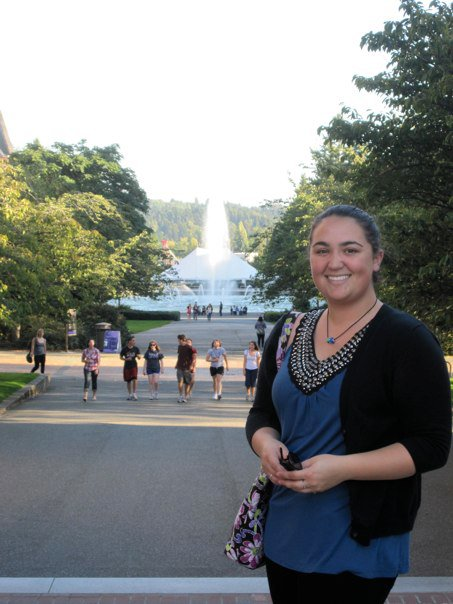 Originally from California, Maiah Hollander graduated this past June from the UW Communication Department with a degree in Journalism. She was also a member of the Husky Marching Band for four years as an undergrad. She decided to move back home after graduation and was able to use the network she built to land a job at Edelman.

What have you been up to since graduation? I moved back to the Bay Area after I got a part-time job working as a Marketing Contractor for a startup called Apprion. I really hit the ground running so that I wasn’t idle when I got back home.

But I also put in an application to intern with a PR firm called Edelman, which after three months of waiting accepted me into their program.  After another three months, I was hired on full-time as a Trendspotter.

Describe your typical work day: A typical work day for me starts with me getting into the office at 8 to put together a collection of events, headlines and trends that are occurring on the internet and sending that note out to the rest of the company.

I then focus on specific brands and look for content that they could use in their own communities, or that designers can create original content from. This takes up most of my day with several brainstorming meetings, which eventually lead to pitches our team makes to clients. Occasionally I’ll be pulled into meetings to discuss strategy and for editorial themes for clients.

How did you find the job you are at now? Funny story actually. I found this job after I set up an informational interview with one of the employees at Edelman. I was a sophomore in college at the time. I found that I really liked the idea of working with this company and the kind of work that they did. So I kept in touch through the years and finally when I was about to graduate I asked if they had any openings for an internship.

Unfortunately they didn’t have anything available then, but told me that they would contact me as soon as there was a space. To keep busy I worked part-time with Apprion, but as soon as they had a space open I put in my application. They interviewed me within the week and after about two weeks they told me I had been accepted.

After working there for three months they told me that they were really happy with my work and gave me a full-time offer. The rest is history.

Do you have any tips on finding jobs for those still in school? It is never too early to start cultivating relationships. Set up informational interviews and keep in touch! Of course don’t pester people, but keep you in the back of their mind.

What is the single most important thing to do while in school to prepare for the real world? Aside from building a strong network, you should be asking your parents, advisor, etc. how to do things they don’t teach you in school. Like how to balance a checkbook. Or how to create a budget for yourself. And taxes. Ask now before you have to scramble to learn all this in the real world!

Now that you’ve had some time to reflect on your college experience, what advice had you wished you received while in school? Don’t assume that your major defines you and what you are qualified to do. As a Journalism major, I was worried that I could only work in print or online media. But now I see that there are so many different ways to look at my skills and where they can be applied.

Where do you hope to be in five years? Edelman is a global company, so in five years I see myself working in the London office and traveling all around Europe.

Anything else you’d like to add? Don’t be afraid to ask for help! And if you don’t land where you hoped you would after graduation, don’t give up! You’ve got to work hard for what you want.