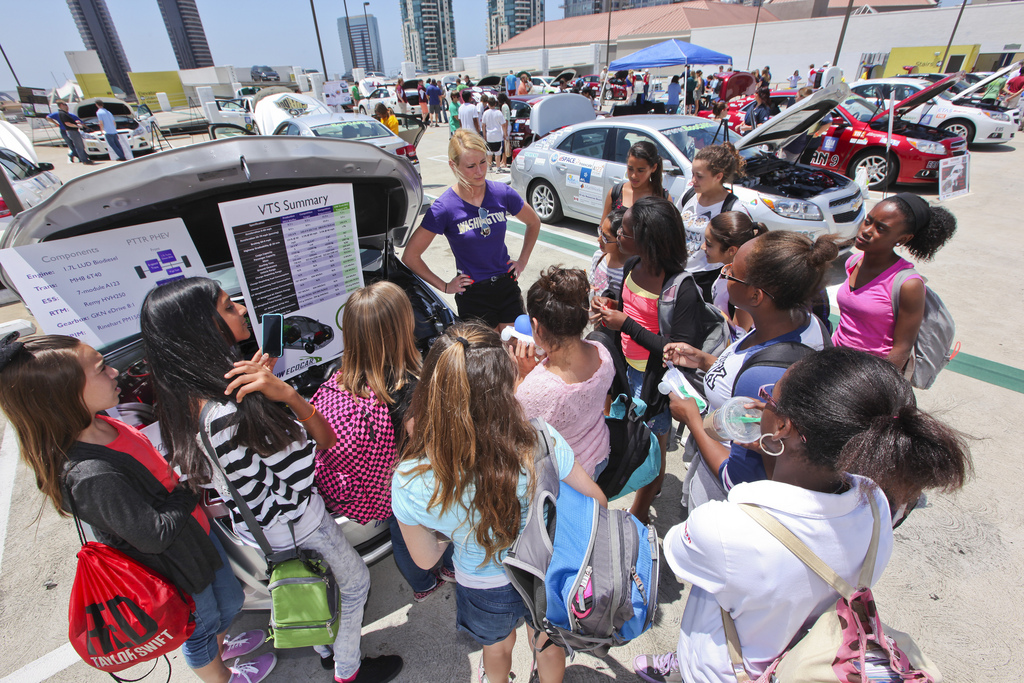 Shea O’Donnell at a youth outreach event in Yuma, Arizona.

While her plans may have changed since entering the UW three years ago, senior communication student Shea O’Donnell has found her passion in public relations. Read about her experience working with UW’s EcoCAR 2 and how it has prepared her for life after college.

By Kate Kitto
(Kitto is a freshman at the UW, intending to major in Communication. She is currently a UW EcoCAR 2 Communications Assistant.)

It is funny how sometimes life seems to fall into place. Just three years ago, Shea O’Donnell was entering UW on a track scholarship, planning to major in biology. Today, her life couldn’t be more different.

Her biology aspirations didn’t make it past her freshman fall quarter, but she was struck by a communications course. A series of injuries derailed her track career before she decided to hang up her spikes.

It was spring of her junior year when she was at a crossroads: her competitive athletic career behind her, she needed to put her career aspirations of Public Relations (PR) to work. Her outgoing personality and knack for networking made PR a natural progression. Luckily, O’Donnell soon discovered University of Washington (UW) EcoCAR 2 and joined the communications team as an Outreach Coordinator.

EcoCAR 2 is a three-year engineering competition in which 15 universities are challenged to reduce the environmental impact of a 2013 Chevy Malibu. EcoCAR 2 fosters real-world experience for the teams of engineers, business, and communications students. O’Donnell is now managing UW’s communication team to meet an extensive set of deliverables such as national and local coverage, social media, and event planning with professionals. She had the opportunity to travel with all of the EcoCAR 2 teams to Yuma, Arizona, where she appeared on TV as a spokeswoman for UW EcoCAR 2.

The program was immediately attractive to her for multiple reasons. As a lifetime athlete, the team-oriented and competitive natures of the project were very appealing. She also appreciated the experience it would provide her.

“I wanted something that bridged the gap between what was learned in the classroom and what happens in the real world. That’s what EcoCAR 2 does,” O’Donnell said.

UW EcoCAR 2 team is currently ranked fourth in the final year of competition; an impressive accomplishment given this is UW’s first time participating in a competition that is dominated by long-standing and engineering powerhouses.

Since joining the team, O’Donnell estimates she has doubled her connections in the communications industry and learned a great deal about internal communications within an organization.

This summer, O’Donnell was promoted to Communications Manager, overseeing four assistants. As manager, she is responsible for monthly status reports, as well as developing a communications plan and implementation report that incorporates all communication activities for the year.

Other duties include blog postings as well as an influencer campaign intended for policy makers in order to advocate for green infrastructures that will support the sustainable changes (electric cars and alternative fuels) of the automotive industry. O’Donnell is also required to generate a minimum of eight different media hits among television, radio, and print as well as host six outreach events.

The goal of the communications team is to educate the youth and consumers on the necessity of green vehicle technologies. Along with her assistants, she has to promote UW EcoCAR 2 around campus, the Seattle Area, and the Pacific Northwest. These efforts have come through social media and various outreach events targeted towards specific audiences, such as hybrid skeptics, the youth, and political influencers.

O’Donnell sees the impact of the EcoCAR 2 program as establishing a stronger communication and engineering base to UW, a school traditionally known for business and science.

“UW EcoCAR 2 is expanding UW’s range of excellence beyond famously being known for UW Medical and Foster School of Business and I’m proud to be the one to lay a solid communications foundation for future UW EcoCAR programs,” O’Donnell said.

Practical experience is of the upmost importance for any job in communications, especially public relations. O’Donnell sees the value of her position and exposure to real-world media and community relations.

“This position is a slap of reality, but it’s the best resume builder for my public relations career,” O’Donnell said.