In Bradly Knox’s personal statement to the University of Washington, he wrote, “I want to contribute to the UW’s research efforts as well as help my goal to establish networks with professional.” Now as a senior, Knox attended the 2014 Undergraduate Scholars Research Conference hosted by the Western States Communication Association in Anaheim, California.

“Nothing is more fulfilling than living up to what I said I wanted to do at the beginning of my undergrad,” Knox said. “This conference built a stronghold of confidence that I can bring to my endeavors in graduate school.”

Knox said his paper entitled “Understanding Jurisprudence through the ‘Metonymic Tokens’ of Lady Justice” was inspired by Dr. Leah Ceccarelli and Ph.D. candidate Miles Coleman. In Summer 2013, Knox took Contemporary American Public Address (COM 436) with Ceccarelli, which motivated him to study rhetoric. He then took Rhetorical Criticism (COM 431) with Coleman in Fall 2013.

“When I chose the topic for my paper, I discovered something unique that I felt I could give back to the scholarly community,” he said.

With the goal to attend a conference to compliment his desires to go to graduate school, a busy schedule and finding out about the conference less than a month before the paper submission deadline didn’t stop him. 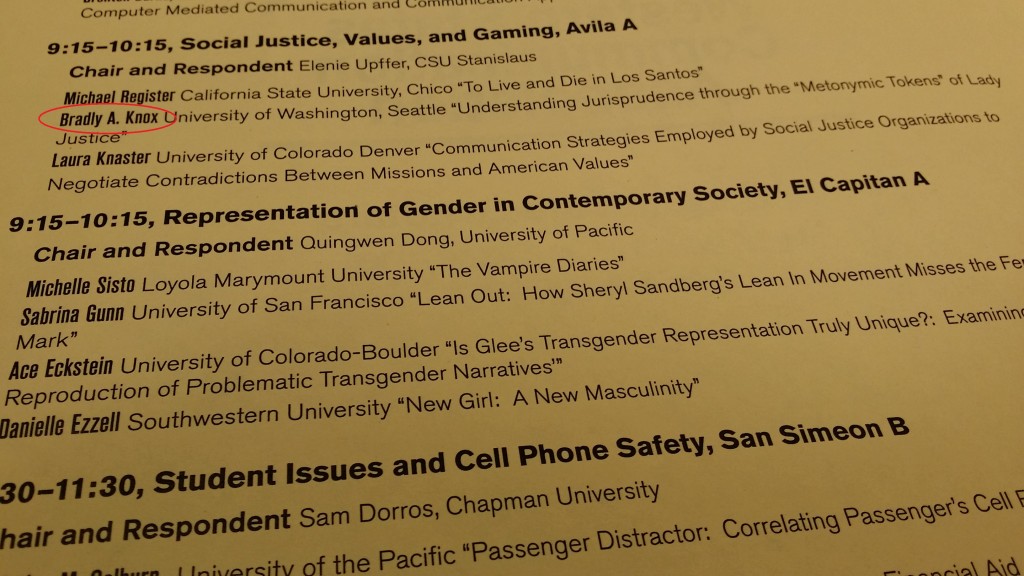 “I was taking 16 credits and working two jobs, but amidst a very hectic schedule I undertook the responsibility of writing this paper to meet that deadline,” Knox said. “I did not sacrifice my main responsibilities to do this, but rather that month’s amount of fun. What I am saying is, that being a UW Communication student had played a major role in my accomplishment and the Department has prepared my indefinitely to undertake projects as big as I did.”

Double majoring in Linguistics and Communication, Knox believes this conference will “shine brightly” on his academic CV and will be considering all the feedback he received to send his paper in for publication.

“The feedback from my audience regarding my paper is my inspiration to push forward with my developed concept in rhetorical theory,” Knox said. “I have a plan that will continue my concept to do more case studies and hopefully make it a viable piece for my master’s thesis.”