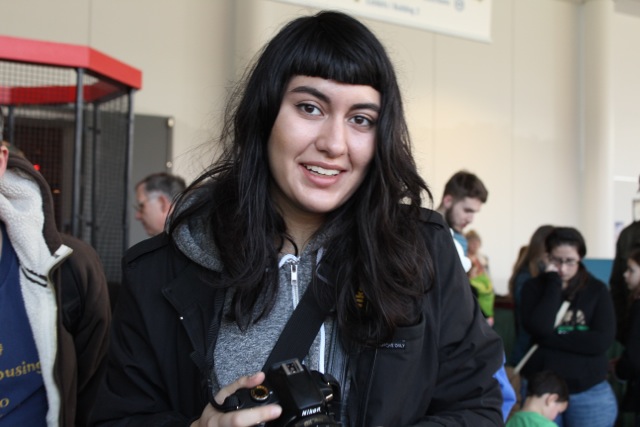 Position: Intern Reporter at the Seattle Globalist, one quarter long, for credit, hours vary by assignment per week

Duties include: Write feature stories and sit in on Friday editorial meetings. Participate in side projects that may involve social media and web maintenance.

How did you find out about it? “I have a friend who had written articles for the Seattle Globalist before, so I looked into the website and found that I really like what they do and their mission. I emailed them asking if they were looking for an intern and they happened to have an intern position open.”

What made you decide to apply? “In addition to agreeing with their mission, I wanted an opportunity to be a journalist outside of the university. I wanted to report on things that didn’t just have to do with the school I go to, but rather what’s going on in the different communities in Seattle. I wanted my journalism to have an impact outside of school.”

What do you like most about it? “I’m writing for a nonprofit organization that aims to represent immigrant and international communities, an organization that brings global issues and news to Seattle. I think it’s really important because I feel like sometimes in Seattle we lose sight of the fact of how diverse we are. We have such a diverse population here and global issues do affect us here in Seattle. It’s awesome to be a part of that and having the opportunity to represent those things through reporting.

Another thing I really like is that my editors and the Seattle Globalist staff are people that I genuinely like as people and they’re people I can have conversations with, not just about my internship, but issues that I’m concerned about. They are all very informed and intelligent, and able to have those kinds of discourses, so essentially I really like that my editors are people that I would be friends with outside of an internship because they are like-minded and have similar goals, and care about the same things.”

Is there anything you would change? “Not really, I can’t think of anything.”

What’s the working environment like? “It’s lax – that’s not to downplay the fact that there are deadlines and very clear guidelines as to what my content should include. Obviously there’s a level to which I need to be sensitive, aware, and educated, but they’re people that I can talk to, they’re accessible, they’re not scary, they’re friendly people and they know that this is a learning experience for us interns and an opportunity to expand our scopes as journalists. So there’s the idea that we will make mistakes and that’s okay, but you just learn so much with that specific goal in mind.”

How do you think it will help you and your future career goals? “As an individual, I’m really passionate about advocacy and social justice. I’m also an economics major and part of being a good economist is taking diversity and difference into account, which I’m being exposed to by reporting for the Seattle Globalist. As a reporter I’m going out and learning about the issues in my economics classes in a hands-on way – I’m interacting with people; I’m learning and telling their stories. In the end, it will make me a better-rounded person in whatever my career path will be.”

What’s your favorite accomplishment so far? “That’s hard because I’ve enjoyed every story assignment, but I particularly liked writing the article about Washington Healthplanfinder, which is an online healthcare website. I wrote about how immigrants, refugees, the homeless, and other groups have a harder time accessing the website and getting enrolled. That was one of the first stories I had written that really felt important because it dove into the arena of policy with a major issue, whereas my other articles have focused more on specific trends or events.”

What has been the biggest challenge? “It’s hard to balance interning, school, and working (close to 20 hours a week). It can be hard to manage my time because a lot of assignments involve going to various parts of the city to conduct an interview or go to an event. These topics aren’t easy to report on, either. Most of the writing I was doing before was on campus for The Daily – an arts feature or an opinion piece. It’s hard, but it’s so worth it and I really care about the work that I’m doing.”