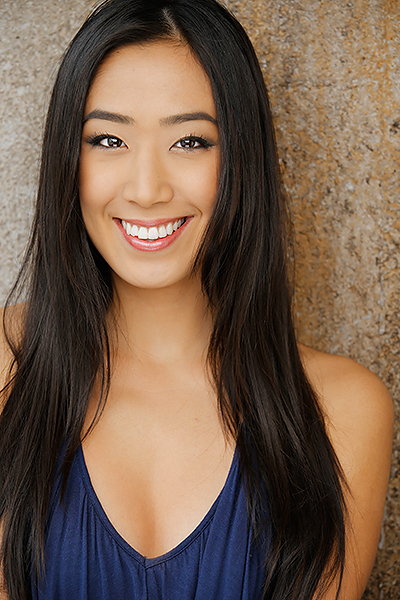 Originally from Puyallup, Christy Choi (B.A., 2013) majored in Communication and Drama, and she was a part of UW Leaders as an undergraduate student. Her passion for performance arts led her to be a member of the Undergraduate Theater Society and motivated her to uproot her life in the Pacific Northwest and move to Los Angeles after graduation. The transition wasn’t easy, but she has persevered over the last year and a half and is making her way in the entertainment world.

What have you been up to since graduation? “I moved to Los Angeles to pursue a career in acting, got myself an agent, and became SAG eligible, which is the Screen Actors Guild. That means I can join the Screen Actors Union now and do other SAG projects in Los Angeles. Most of the big TV and film projects are SAG projects, so that was a huge step for me. I’m taking improv classes and other workshops, like networking with casting directors and directors. Lastly, I have a film that I’m shooting this month – a feature film, low budget indie but I have the lead so that’s really exciting. I also ran two half marathons, which was a huge accomplishment.”

What does a typical day look like? “It’s very different and all over the place, but most of the time I wake up and check my email and go on all the public submission boards – different lists of auditions that are open to the public – and I submit to projects on my own. Sometimes, I will submit to non-paying gigs as long as they are done with reputable film schools because if I book the job I could potentially get some good reel material out of the finished product. A reel is a collection of different scenes that showcase your acting ability. Some days I have auditions to go to after I am done submitting. Auditions can happen anywhere from once a month to three times a day. It’s so random and if I’m not doing that, then I’m either going to a class or working on set. I also wrote my own viral short comedy – right now it’s really important for actors to write their own material. Internet sites like college humor, funny or die and YouTube are huge Internet labs for comedy.”

What tips do you have for those who want to move to L.A. to become an actor? “You have to be open-minded and prepared for the career to take you anywhere. There’s really no set path for it. I heard it so many times, but really when you get down here you’ll see. Some people move here and get lucky and book a pilot within four months and they won’t have to worry about working for another two years, and some people will be here for five or even ten years until they book their first big film or TV pilot. But it’s so important to remember that it’s not about booking that first pilot or film, it’s just about the journey and watching yourself develop more and more contacts and knowing the right people – a group of people that you want to continue collaborating with on creative projects. Remind yourself that being in L.A. is the first step and it really is important. If you want to work in television and film, a lot of it is who you know. Do projects – work does beget work. Some of my actor buddies who do the best and most consistent work are people who are constantly going out there every day doing a bunch of projects from small non-union projects to big SAG national commercial projects.”

What is the single most important thing to do while in school to prepare you for the real world as an actor? “If you want to be really smart and tactful about it, I think I would have gotten an agent earlier while I was still in school. If you can, get a local agent in Seattle so you can get a sense of how the actor-agent relationship works, how auditions work, how casting directors work – and there’s a huge advantage to having a smaller pool of actors in Seattle who are just in the general Northwest area because when you get called in for an audition, most likely you’re not competing with 500 other people. So the chances of you booking a job are higher and if you can book a SAG project before you come down to L.A., especially a television project as a co-star or guest-star, it helps to have that on your resume when you’re initially looking for representation down in L.A. People will notice you more for those credits, more than your school theater credits. Not to discount being a part of a student theater production at all because I think that’s where you learn most but when in L.A., the credits that count are TV and film credits that you have booked.”

What advice have you been given that has proven to be useful in your career? “Have enough money – if you think three grand is enough, it’s not…bring like $10,000 because you will spend so much money initially on moving into a new apartment, headshots are anywhere from $400 to $1300, getting a reel together costs money, signing up for the online submission boards to get you auditions – everything is designed to steal money from poor actors, so be wise about your financial cushion. Be open-minded and remind yourself that if you are moving down here, you’re in it for the long haul. Tell yourself you will give it at least three years because you just don’t know if it’s worth it or not until you’ve given it your all for three years. And don’t expect something grand to happen in the first month. Have realistic expectations, be flexible, be smart with your money, and come on down! People are really outgoing and it’s easy to find yourself a community down here. Everyone is so open to collaborate and they come from everywhere so it’s really easy to make new friends.”

Where do you hope to be in five years? “I love getting asked this question because I know exactly where I want to be. In five years, I would love to be a series regular on a sitcom. Hopefully the sitcom is in its solid third season and will run for a couple more seasons – like a How I Met Your Mother or it doesn’t even have to be a sitcom. I would love to be on any show. Its regular income, I will always be working and it would be so fun to work with a set group of cast members and have a community of my own that way.”

What has been the biggest challenge since graduating? “I think just adjusting to a new town. I did a lot of research on the career end before moving. I thought I came as prepared as I could. I had enough money, I had a list of contacts I wanted to get in touch with, a list of workshops and classes I wanted to sign up for, and agents I wanted to reach out to. But I think I underestimated what it is like to move to a whole new town barely knowing anyone. It takes time to get used to everything and really feel like it’s your home. The hardest lesson for me was being patient with myself. It took about a year for me to start feeling like this is my town, these are my friends, this is my groove and my network.”

How did going on the Career Exploration L.A. 2013 trip with the Department of Communication help you get to where you are now? “It was really exciting for me because I knew I wanted to move to L.A., so everything I heard on that trip was very valuable and there was a sense of envy and excitement because these people are living here and working here in the entertainment industry. Interacting with such successful people was incredibly inspiring for me and it gave me a sense of pride and confidence, especially in where I come from and the University of Washington. I also was able to get in touch with people I met on the trip once I moved down here, like Jerry Collins, who has his own company that generates viral internet content, so I highly recommend the trip if anyone is planning on moving down to L.A. and work in the entertainment field. I think it’s so cool that I got to meet with the executives at Viacom and talk about where the future of television and internet is headed. I think knowledge is power and in that sense, it was an empowering trip for me.”

To find out about the next Career Exploration trip to L.A., click here.