Journalism and dance major Imana Gunawan has been in Amman, Jordan since mid-June as a Foreign Intrigue student reporting for The Jordan Times. Born in Texas, but raised in Indonesia, Gunawan has found many similarities to the culture she finds familiar. Read about some of her experiences and the work she has produced thus far:

What has surprised you the most about Amman?

“Two things: When I first came to Amman, I wasn’t expecting it to be so similar to my hometown of Jakarta, Indonesia. Although of course the history, the geographic situation and all that jazz are different between the two places, the culture and society is strangely similar to one another. For example, what struck me most was that both Amman and Jakarta are cities at odds with themselves. They are keeping up with globalization and Western capitalism for the most part, but their roots, both of which are grounded in Islamic tradition, are also pulling them back – so you get this interesting mix of old and new, modern and traditional, “conservative” and “liberal.” Also, both places hold classist societies with ever-growing class divides and wealth gaps. There are mansions with multiple BMWs on one end of town and broken-down apartments on the other end. There are big fancy malls with slums growing behind them.

“The second thing that surprised me most is how much my Indonesian upbringing is influencing the way I see Amman. I was born in Texas, but grew up as a Muslim in Indonesia, the country with the largest Muslim population in the world. Coming back to the United States after living most of my life in Jakarta made me realize that I am just as much an American as I am an Indonesian. But coming to Jordan, also a largely Muslim country, I started to realize just how much I’ve been influenced by Islam on top of being an American-Indonesian, which I never really thought about when I was in the States. From experiencing Ramadan (the fasting month), knowing how to read Arabic and even having people recognize my name as an Arabic name — I am continually surprised by how familiar Amman seems, just because its culture is so similar to my Jakarta’s. It feels like coming to a foreign land and a familiar home at the same time.”

What has been the biggest challenge so far reporting in a foreign country?

“The biggest challenge is starting a reporting project. Jordan is surrounded by multiple places of conflict, and each conflict is affecting the country in different ways. There are so many stories within that. But beyond that, Jordan itself has many internal issues, one that is not directly related to the surrounding conflicts: lack of resources, the class divide, corruption, tribalism, gender inequality, slow reform, racism and homophobia and much, much more. So where do you even start? Finding a topic to explore and staying with it has been quite challenging, especially when you only have less than three months here. That, and dealing with cockroaches is also pretty challenging.”

“I did manage to start multiple reporting projects, despite how hard it can be.

“Despite being able to read and write Arabic (I learned how to read the Holy Quran growing up), I was never taught vocabulary, grammar and things like that, so I can read and write Arabic, but don’t really know what it is I’m reading/writing. But I can now manage to navigate a cab and negotiate with vendors at the market in Arabic.

“I found a dance community that is very loving and supportive. They even asked me to teach a contemporary dance class.

“I have always enjoyed writing about different underrepresented communities, but it always takes more time to report because I have to break through the initial barriers first. I was able to successfully get to know the domestic worker communities, Iraqi refugee community and Latin and Tango dance community in Amman, and write about them.” 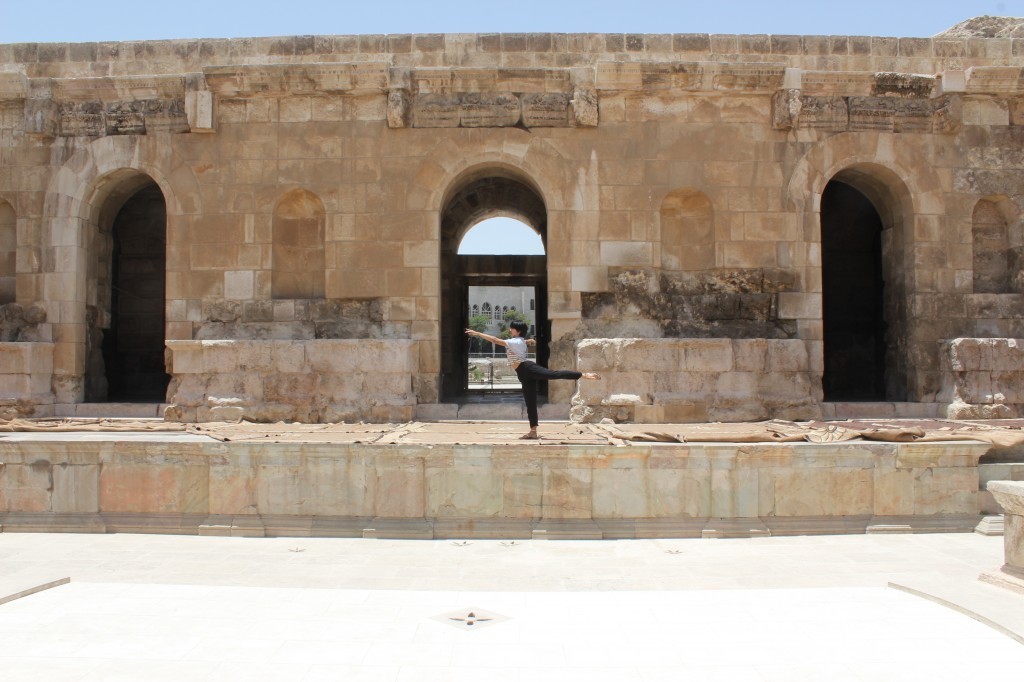 Can you share an anecdote from your trip – cool adventure, funny incident, lesson learned?

“There are way too many anecdotes, ranging from the silly to the adventurous to the enriching. Many of them have hidden lessons in them, whether moral or just lessons in the form of reality checks. What has been the most educational though has been my experience with being a woman, being an American and not being white. Being a female journalist in such a patriarchal culture is definitely interesting. Considering the situation with the Israeli-Palestinian conflict, Amman and many other places in Jordan have witnessed numerous demonstrations supporting Palestinians and condemning Israeli violence. Whenever I go to the rallies to cover them, I would always be the only female journalist, or one of the two female journalists. The female protesters usually gathered behind the male clusters, so I would be the only female roaming around the male area. Given my small and unassuming stature, people would often also stare and probably wonder whether I was just a lost person who happened to wander into the crowd of people chanting. But many other experiences have made me so aware of both my gender and my race. Just walking down the street, men would wolf-whistle and catcall (I even got serenaded once). I even tried wearing a fake engagement ring once as a social experiment, and the catcall decreased by a little bit, which is a little sad. I remember my first time walking around Downtown Amman, the men would catcall, wolf-whistle and all that, but they would also shout “Ni Hao” or “Konichiwa” or “Annyeonghaseo” as I walked past, which confused me to no end because I don’t look at all East Asian as in Japanese, Chinese, or Korean… Many cab drivers have asked whether I was Kenyan, Indian, Sri Lankan, Filipino and of course, Indonesian. Because most of the women from those countries come to Jordan to work as domestic workers, they would initially think I was a maid, until I told them I’m an American and work at The Jordan Times. Before I left Seattle for Jordan, I had talked to a few people about what it’s like to work as a journalist in Jordan, but only one of the people I talked to was a person of color. I was interested in how my experience would be different, coming to a foreign country as a non-white American. The above are just a few instances of how my experiences are different. It can be tiring to deal with such micro-aggressions on top of having to adjust being in a foreign country, but it has also been interesting and educational to see how the racial dynamics unfolds in a country I’m not familiar with, especially because I have a particular professional and personal interest in identity politics. This whole experience just shows me how absurd and funny the world can be. And it’s chock-full of stereotypes too.”

What are you looking forward to most as you continue your stay in Jordan?

“I’m most looking forward to continue to meet new people and learn new things, and hopefully finish the many projects I’m working on (or at least get all the material I need so I can finish the projects once I’m back in the States). I’m particularly excited about finishing my radio and video projects, which I don’t often do.”

Are there any articles that you’ve written that you are especially proud of?

“I wrote an article about domestic workers for The Jordan Times and it’s published here: http://jordantimes.com/for-some-domestic-workers-labour-rights-still-elusive. “It mainly started with me being curious about the Indonesian community in Amman, and as I’ve found out, there’s a bigger community of Indonesian domestic helpers (both documented and undocumented, live-ins and irregulars) than there are expats. In addition, I also grew up with domestic helpers back in Indonesia, so coming to Amman, where most families also have maids in their homes, I became really interested in the issue. Growing up, I had heard stories about mistreatment of Indonesian helpers in Saudi Arabia, Malaysia and other countries, but I didn’t think much of it as a kid. Being in Amman reminded me of those stories, so I got really into the issue, and could probably talk someone’s ear off with all the information I’ve found. The story for The Jordan Times is kind of a broad overview of domestic workers’ labor rights, but once I got started and interviewed my sources, the more I discovered that there is so much to the matter. The issue is impossibly complex, and there are so many angles I could pursue. I’m really interested in potentially turning this issue into a series of articles either for one publication or different ones. In addition, I’m also currently working on a radio story on LGBTI activism in Amman, and how they’re dealing with gentrification. It’s still in progress, but it’s one of the stories I’m most excited about.”

“Being in Amman has taught me a lot, both as a journalist and as a person. I have three weeks left, and it feels like life in Seattle is worlds away. The routine of going to classes, rehearsals, finals and work just seems so different than the world I’ve been in for the past few months. What I’m most reluctant about, however, is finding people who will care about the issues going on here. Hopefully it won’t be too much of a ‘reverse culture shock.’

Read another article Gunawan wrote about women empowerment here, and check out her personal blog for more photos and stories.