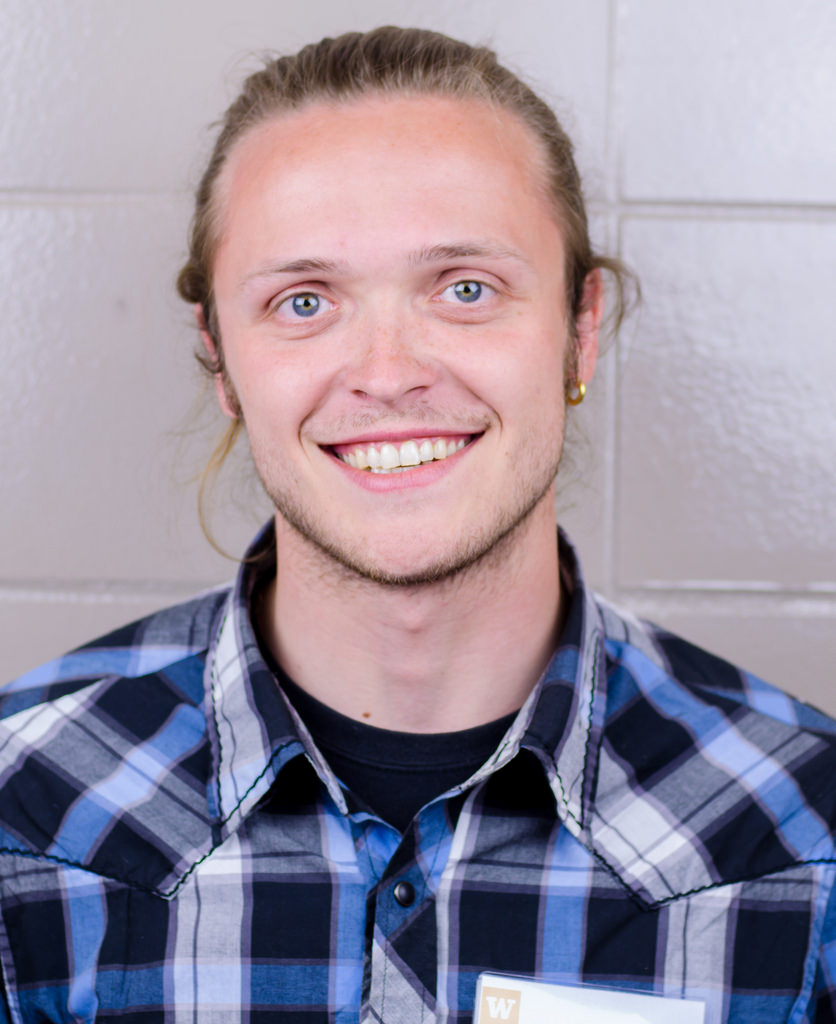 Being selected for the Foreign Intrigue program was a dream for senior journalism student Cooper Inveen, who wants to dedicate his career to international reporting in dangerous parts of the world. In June he departed to Freetown, Sierra Leone with optimism and drive, and a small bit of knowledge about Ebola from the news and a course he had taken on tropical diseases. An Ebola outbreak had been going on for about three months at that point, claiming around 20 lives, but Inveen knew how hard the disease was to contract.

“The idea that I could be evacuated because of Ebola was the furthest thing that could possibly happen in my head,” he said.

That all changed two months into his trip when he received a phone call from professors at the UW Department of Communication the same day the Peace Corps announced they were leaving the area due to two volunteers coming into contact with an Ebola patient in the backwoods of Liberia. Inveen convinced the Department’s faculty to let him stay as he sent daily reports on how many times he had washed his hands, his eating habits, and where he went.

Unfortunately, his health efforts could not stem growing UW concerns. British Airlines cancelled services to Sierra Leone, the World Health Organization declared that Ebola was expanding at a rate that couldn’t be contained, and the Centers for Disease Control and Prevention upped their ranking of the threat. That was enough for UW top leadership to have Inveen return a month earlier than planned from Sierra Leone.

“I didn’t feel endangered,” Inveen said. “I’m sure there was a threat to my life, but there are threats to your life everywhere.”

With chlorine hand washing stations popping up on every street corner and the epicenter of the outbreak being in the Eastern part of the country, Inveen was disappointed to say the least. He also felt that the media revolving around the issue was falsely portraying the facts.

“The American media has been propagating this idea that – in the way one of my local friends put it – ‘they are reporting it like every one of us has Ebola,’” Inveen said.

Now Inveen is focused on the time he was there. Inveen wrote a daily column and other news stories for Awoko, an independent newspaper named for a West African talking bird, while also freelancing for Humanosphere. We asked him a few questions about his experience:

What surprised you the most about Sierra Leone?

“I think what surprised me that most was how easy it was to fit in, how easy it was to get along with everyone, and the fact that every person you meet is the nicest person you’ll ever meet. It feels really strange being home because I’m constantly walking around asking myself, ‘Why didn’t that guy smile at me? Why is everything so expensive? Why can’t I walk into my neighbor’s house who I barely know, sit down and eat some food with him?’ They are the kindest and most resilient people I’ve ever met.

“I have a good friend that I met there who has grown up with far different circumstances and upbringing than I did – has gone through hardships that I could never imagine going through – and yet our life philosophies and passions and what we think are important are all nearly identical. Growing up in Seattle, your parents tell you and you hear that everyone is the same and we’re all one race, but it takes something like that to actually see it firsthand. This kid who has survived a major outbreak, a civil war, comes from a small village, and has to beg for money to go to college is the same as me in every way, shape, and form – and is just as smart, if not much smarter than me. The resilience and enduring nature of the human spirit is nothing short of astounding. That was totally reassured to me in Sierra Leone.”

“It helped that they spoke English. I was asked this while I was there too and I didn’t feel like there was much to say. I was just having the absolute time of my life. I want to be a developmental reporter and be embedded in conflict zones and danger zones, especially in West Africa, so being thrown from college into this experience that is exactly like what I want to be doing for the rest of my life was incredible.

“Getting along with people wasn’t a problem because everyone is so friendly. As long as you involve yourself with the local community, everyone is more than willing to accept you. If you establish yourself as trustworthy, anyone is willing to talk to you – Sierra Leoneans love to talk. These people are suffering and if you ask them about it, they’ll tell you. Sure, it was weird to have to wash my body with a bucket of ice water in a pitch black, dark and rusty bathtub or to pour my toilet water from a bowl that I collected from outside, but even those things I wouldn’t consider challenges at all. It was nothing compared to how awesome the people were. When you realize these people aren’t dying left and right because there’s a cockroach living in their house, you can deal with it too. I learned a lot, so I guess it’s a hard to answer that question.” 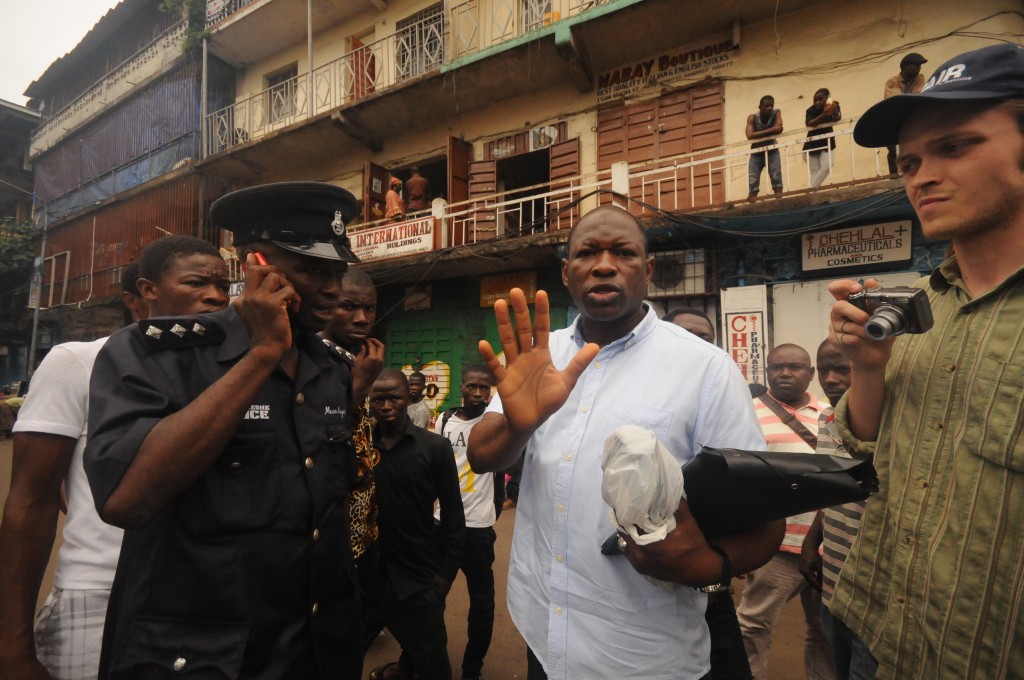 Cooper Inveen (right) covering a protest during which shop keepers closed down to protest what they believed to be an unjustified tax hike. Photo courtesy Inveen.

What successes have you had so far (even if it as small as a successful trip to the grocery store)?

“Well I consider it a success that I had two different entities of the Sierra Leonean government get upset with me [because of my reporting and writing], plus the American Embassy. That was tight.”

Can you explain that situation more?

“From right when I got there, I decided that I wanted to be different than other interns that have gone there and report on subjects that mattered. I’m obsessed with political economy in general. So right off the bat I focused on learning the politics and finding the corruption. I started writing about corruption and transparency – that was the main, if not only, subject of my columns in the Awoko Newspaper.

“One of the earlier columns that I wrote was about police accountability because the police department out there is terribly evil – they torture people and there is an insane amount of bribery. The Sierra Leone Police Force was not too happy about it and they actually came to the office to talk to the managing editor Kelvin Lewis, who is also the president of the Sierra Leone Association of Journalists and everyone really respects him. As far as I know, he basically told them that he wouldn’t stop printing articles like that.

“Then a couple weeks later I wrote another piece about the supplementary budget that the government passed and the reallocating of those funds that I did not agree with. A couple of people from the central government expressed discontent with what I had written.

“I also wrote a piece about transparency because the funds going to Ebola were disappearing. The column was pointing out what I thought were very obvious holes of the situation. The next day I came into the office and it wasn’t published. Mr. Lewis told me to talk to him after the morning meeting. He tells me that it’s a great column, but since I’m not from Sierra Leone and it’s obviously me that wrote it that he can’t publish it due to a phone call from my ‘American compatriots’ requesting to stop for my own safety. I was confused more than anything because I had a lot of fans that love the subject matter and if I started writing about beaches then people would be disappointed, and I would be disappointed in myself and not be able to stomach my own writing. He gave me a big speech about no story being worth my life because the Sierra Leone government will do anything. It got through to me because I really respect Mr. Lewis as a journalist, and he’s a hero and a mentor to me. I went back to my desk and wrote a column in two minutes about all my favorite foods. The next day he ended up publishing the transparency column.”

Can you share an anecdote from your trip—cool adventure, funny incident, lesson learned?

“The water surrounding Freetown is all filled with trash so it’s amazing to go to the beach where it’s the best place in the world to swim and the beach is majestic, but what looks to be seaweed washed up on the shore is all trash. A couple of friends and I spent hours playing around in the water with giant waves and the whole time I was wondering why there isn’t a surfing scene there. Even the trash didn’t really matter because we were throwing it back and forth playing catch with an old bag of laundry detergent. It really put everything in perspective of what’s important and what we don’t need to be afraid of. Here I was with people who have the least but are able to enjoy life. It reminded me to loosen up my tight grip on order and cleanliness and to just have fun with it all. We played for six hours before eventually I came out of the water with an old bed net over my head and decided it was time to go home.”

“When it comes to an international audience, I would say I was pretty proud of the one I wrote for Humanosphere about Ebola denial because it was relevant back when it came out. But then after the mainstream media started copying it and doing the exact same thing three weeks later after it wasn’t relevant anymore, it just became more damaging than anything else.

“When it comes to my columns, I wrote a big piece that ended up being a full page about CNN advertising the secret serum that were curing American doctors, when in reality it wasn’t secret, it wasn’t a serum and it wasn’t curing anything – but that news got back to Sierra Leone and made them think that America was holding out on a secret cure, when it just caused a bunch of terrible things. So I wrote a big long piece about what the ‘secret serum’ actually was and I was pretty proud of that.”

Since returning to Seattle, Inveen has appeared on Al Jazeera America and KUOW to talk about his experience. Read more on his personal blog, The Rain Enthusiast.