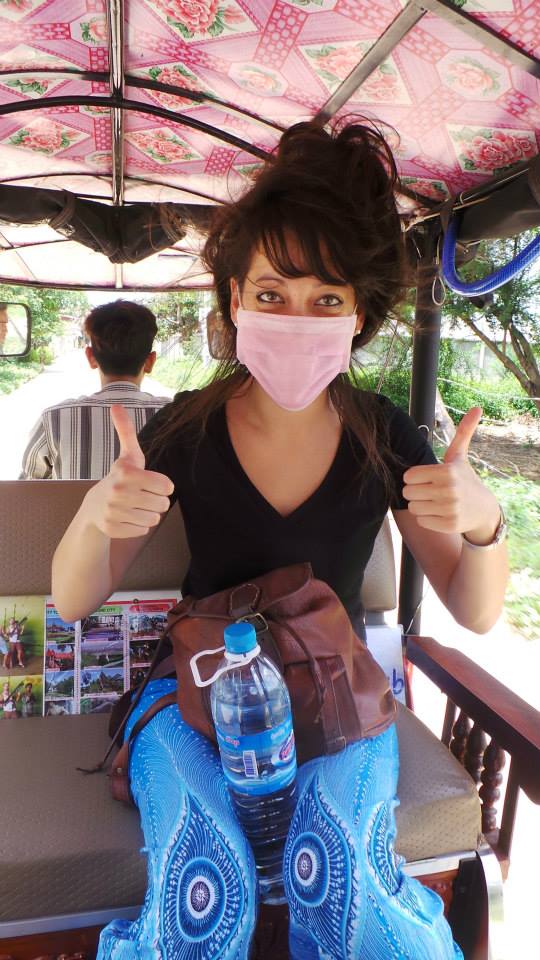 Melanie Eng on the back of a tuk-tuk during a day of sight seeing.

What better way to finish your degree than spending the summer working for a newspaper in Phnom Penh, Cambodia? Melanie Eng completed her B.A. in Journalism and International Studies this summer in the Foreign Intrigue program reporting for the Cambodia Daily. She has shared a few moments with us below.

What has surprised you the most about Cambodia?

Honestly, what surprised me most about Phnom Penh (I can’t speak for other parts of the country, since I haven’t traveled outside the city yet) is just how developing it still is. Despite being fully aware of Cambodia’s dark history, the state of its economy and current political climate – all of which are indicative of a nation very much in the midst of repair – I was expecting the capital to be a little more, well, developed. I wasn’t prepared to be confronted with so many shocking displays of poverty every single day. Nor did I expect basic infrastructure like roads, public transportation and waste management to be glaringly absent throughout the city – something that took a while to get used to. Since the country is technically governed by a democracy, and the ruling party is super gung-ho about foreign investment and rapid private sector development, I figured things would be a little more modern. Unfortunately, poor urban planning and an utter lack of social welfare services means new commercial buildings for the wealthy are being frantically built (seemingly) on top of each other, while the 22 percent of Cambodians living under the national poverty line are forced to live in shacks, slums or even out on the street, begging for money. On a happier note, I was pleasantly surprised with the existence of a bourgeoning arts community here (which I covered for quite a few stories), as well as a rich and varied cafe culture that perhaps harkens back to Phnom Penh’s French colonial past.

What has been the biggest challenge so far reporting in a foreign country?

There are a whole host of challenges that go along with reporting in a foreign country, the most frustrating of which is, not surprisingly, the language barrier. Only a small percentage of Cambodians speak English, and the ones who do typically only speak it on a very rudimentary level. This meant having to rely on the translation of a Khmer colleague and co-reporter most of the time – or when that wasn’t an option, struggling through the interview on my own while finding it extremely difficult to understand what my interviewee was trying to say (and knowing that they weren’t expressing themselves as genuinely and accurately as they would be able to in their own language). Another major challenge was simply finding stories. My internship at the Cambodia Daily was very unstructured, so pitching my own story ideas was really the only way to get a byline and avoid typical intern grunt work. It got easier with time, as I established relationships with English speaking sources (from the NGO and arts communities), but at the beginning it seemed damn near impossible to come up with relevant story ideas when I was still brand-new to the country and couldn’t even walk two steps down the street without getting lost!

While I’m proud of all the articles I’ve written for this paper (most of which were features on arts, culture and business development), the most meaningful one I’ve written thus far was about local efforts to revive and recreate traditional Khmer art forms, which are largely disappearing in the midst of globalization (let’s just say K-pop and Bollywood dominate the cultural scene here more and more with each passing day). Writing this story was fascinating in its own right, and I got to attend a traditional arts performance during my time reporting about it, which was an excellent experience. I’m also proud of an article I wrote a few weeks ago about a new multimedia program aimed at improving sexual health awareness and resources for teens. I’m personally really passionate about reproductive rights and sexual health advocacy (especially in parts if the developing world where such resources aren’t readily available), so feeling like my story somehow helped this matter was pretty exciting,

Moving to a developing country is a challenging experience under any circumstance. Living on your own and having to deal with the emotional rollercoaster of culture shock with no social safety net and nobody else to lean on makes it all the more trying. Now factor in the difficulty of communicating with locals (but having to figure it out anyway for your job), the terror of crossing the road in a place where traffic laws are virtually non-existent, and yes, the surprisingly complex system of where/when/how to buy groceries as a foreigner. The fact that I overcame all of these massively daunting obstacles and am spending my final week in Phnom Penh in a state of relative calm, self-assuredness and even sadness to leave all this chaos behind, is to me an incredible success. Melanie Eng and her colleague getting caught in a monsoon while out in the field reporting.

Can you share an anecdote from your trip – cool adventure, funny incident, lesson learned?

An anecdote from my first week at the Daily, taken from my personal blog:

“For my very first story assignment at the Daily, I covered the emergence of grassroots e-commerce businesses in Phnom Penh that operate via Facebook (you can read the story here.)

Since I don’t speak a word of Khmer — and most Cambodians don’t speak a word of English — I was paired with a Cambodian staff reporter named Pisey to help with interviews and translation. I spent my first work week riding around on the back of her motorbike, tracking down interviewees and getting lost more than a few times. It was a blast, actually; Pisey is about 4’10”, cute as a button and bears an uncanny resemblance to one of my best friends from home.

The whole reporting process went pretty smoothly until Tuesday afternoon. We were on our way back to the office when the rain came out of nowhere.

And when it rains during wet season in Cambodia, man does it rain. One minute it’s sunny without a cloud in sight, and then all at once — boom! — thunder, lightning and buckets pouring down hard enough to drown a man. And there we were, caught in the thick of it, with nothing but cheap, paper-thin ponchos to shield us.

If I can impart any parcel of wisdom I’ve gleaned over the past week and a half, it’s this: there is literally nothing more terrifying than flying down a chaotically jammed, completely flooded city road on the back of a motorcycle in the midst of a full-on, wrath-of-the-gods monsoon storm. Shin-deep in murky floodwaters. Sans helmet. Monks on the street of Phnom Penh collecting their daily alms.

Not surprisingly, even a biblical flood won’t make drivers here recognize the existence traffic laws…if those laws do, in fact, even exist. Which I’m beginning to doubt. Out of control motos and tuk tuks still careened wildly through what could only be described as a (very filthy) lake, while street vendors vigilantly held their ground against the rising tide — somehow convinced that a little flooding wouldn’t deter people from strolling by and casually buying some coconuts to go.

The whole experience was a weird mix of thrilling and terrifying — especially terrifying when Pisey started yelling (over the sound of erupting thunder and blaring horns, no less): “Melanie! I can’t see! I can’t see!”

Anything for the story, right?

What are you looking forward to most as you continue your time abroad?

I’m wrapping up my internship at the end of this week, after which I’ll be traveling throughout Cambodia, Malaysia, Vietnam and Thailand for three months. I could not be more excited for the adventures that lie ahead as I continue to explore this fascinating and culturally rich part of the world.

This summer was a period of incredible personal and professional growth. It wasn’t easy by any means, and in the end, the experience was completely different than what I thought it would be. But I’m coming away with invaluable lessons in gratitude, perspective and self-sufficiency that I’ll carry with me for the rest of my life. I’m so grateful I got the opportunity to immerse myself in this beautiful and resilient culture for two and a half months. It was worth all the blood, sweat and tears, and I wouldn’t take it back for anything.