Joseph Slate (B.A., 1951), who was inducted into the Department of Communication Alumni Hall of Fame in 2010, came to the Wall of Recognition Ceremony this week to see his name on the new display in the Communications Building. In anticipation of visiting the place where his career started many years ago, Slate wrote down some thoughts at 3 a.m. when he was unable to sleep: 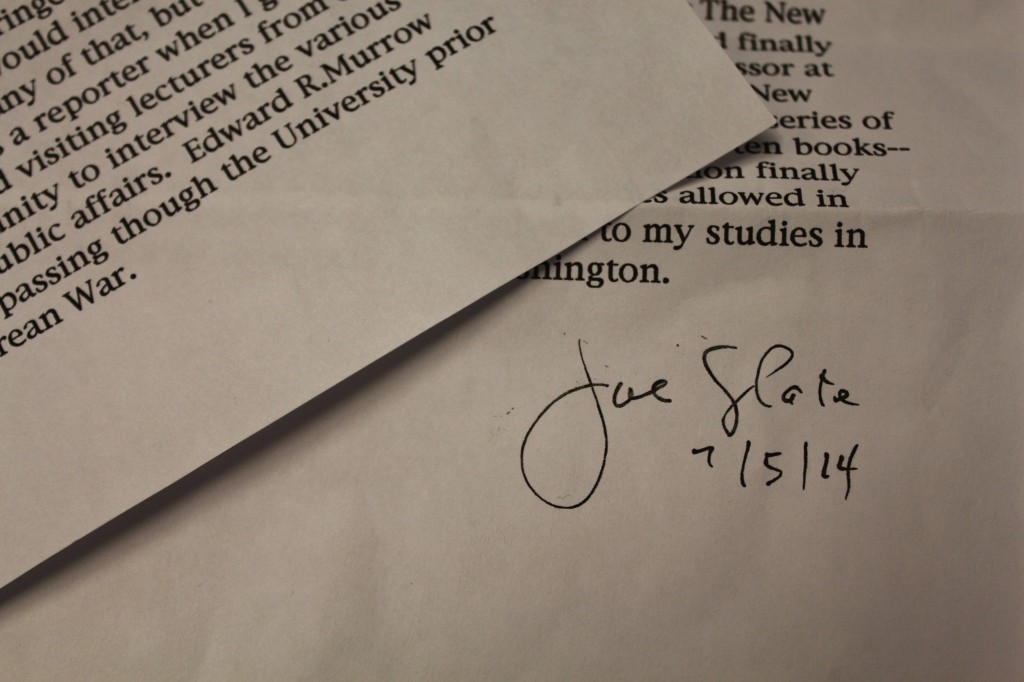 Some thoughts about how my journalism (and/or communications) studies helped me in my future endeavors.

Since I graduated in 1951, the world of communications has changed radically. But newspapers still exist, even as they struggle to exist, and the problems for writers are still somewhat the same.

Although I was born a writer, even pretending to scribble out phantom stories in a phantom script as an infant, that was only the beginning of my trials.

If my schooling had been in a small college, even if an excellent liberal arts one, I wonder how I would have had a world opened up to me as the University here and Seattle were able to open up a whole world to this West Virginia small town boy.

I always feared my lack of rich vocabulary, and as E. B. White said of his days in the Seattle Times he was scared to death most of the time. Fortunately I was able to allay some of those fears by learning from courses that covered actual newspaper and magazine writing on The Daily and coursework on radio news writing. What I learned at The Daily was meeting deadlines. How to simplify my thinking and writing in order to tell stories. Since the University was a big source of news for the local market, I was hired as a stringer for the Times and learned to ferret out stories that would interest the news desks there. I don’t recall any pay for any of that, but it did pay off in the Times hiring me full-time as a reporter when I graduated.

The University always had visiting lecturers from every field, and we had the opportunity to interview the various luminaries in the arts and public affairs. Edward R. Murrow gave me his broadcast text passing through the University prior to his checking out the Korean War.

But an important factor in my growth was in the collegiality of fellow journalism majors. We talked newspapers and the prominent small magazines all the time – knew the great ones, and knew the work of many of their writers. We also knew the work of our fellow Daily writers for example, and no one was spared criticism.

The journalism faculty was aware of our professional intentions and encouraged them. Jobs were just as hard to land then as they are now, but we were always encouraged to set our sights for openings on small newspapers, as well as the major ones. A journalism or communications student had an edge and still does.

I went on from reporting for the Seattle Times to editing for a government foreign news output in Washington D.C. and in a two-year stint in Tokyo.

My studies and background taught me what I could do and what I wanted to do with my life. My zest for The New Yorker humor writers was honed at Washington and finally worked their way into my own career as an art professor at Kenyon College. I published two short stories in The New Yorker at Kenyon and then left teaching art to begin a series of children’s books, some of which – the Miss Bindergarten books – have now sold over a million copies. But illustration finally gave way for my love of writing, and the poetics allowed in children’s books have come full circle back to my studies in journalism and communications at Washington.