Have you seen it yet? The UW released a new commercial this week and Communication student Mackenzie Altig takes the spotlight as she is featured throughout the 30-second reel.

Tell us a little about your involvement on campus.

I am a senior majoring in Communication and minoring in Italian because I am half Italian with dual citizenship of Italy. My family produces wine/olive oil in Tuscany. Over the past four years I have been devoted to my sorority, Alpha Phi and working hard toward our main philanthropy ‘Red Dress Gala’ where we raised over $60,000 last year to give to the University of Washington research center for women’s heart health.

How did you get chosen to be the “star” of the commercial?

I was chosen to be the “star” of the commercial after two separate interviews/castings: They liked that I was a student at the University of Washington and that I kept active (hiking, biking, running, etcetera).

What was it like? Do you have any experience being on camera?

I had a blast working with this team of professionals. I have been a professional model since the age of 14 so being in front of the camera comes fairly natural for me, although I have never worked in a major motion production/commercial such as this. 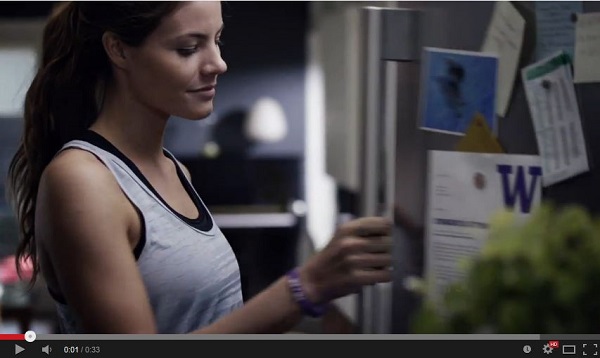 Mackenzie Altig in the opening scene of the new UW Commercial.

Did you learn anything Communication related being in the commercial (about brand, videography, scripts, messaging)?

I actually learned a lot over the two days of filming. After looking over the script and talking with the director I realized how the fluidity involved in this production from scene to scene was very important. Such as me running down the stairs to a soccer player’s foot kicking the ball, or the washing machine water to the UW vessel, or from the drum of the percussionist to the drum of the marching band. So many of these small details are what make this picture so beautiful.

I also learned that the slightest details and movements, or even shadows, can affect the picture. For example, when I was riding the bike across red square we had to call background action meaning that multiple students were placed in certain attire and in certain positions to walk across campus so that the scene would look realistic. Nonverbal cues were also crucial to this project since none of the participants had any speaking roles that meant that we had to portray on our faces certain emotions because we couldn’t speak them verbally. I remember specifically in one of the scenes I was walking into the classroom and the director told me that he wanted to see on my face that I was walking into the classroom for the very first time and that I was confident to take the next step of being a devoted student at the University of Washington. Personally that seemed like a big story to tell just on my face, but after some practice it was easier for me to portray this idea.

Have you been recognized yet?

Many of my friends have recognized me in the video and have continued to post on their Facebook pages as well, which is very special to me because not only are they supporting and promoting their school, but they are also supporting a friend. I think it was smart of the production team to choose a model/actress who is actually a student of the University of Washington because it gets the students excited when they can see their friends in the video. What was really cool for me is that one of my best friends and roommate, Megan Florer who is a senior cheerleader for the University was also featured in the video. This definitely enhanced the authenticity of the commercial and made it easy for me to undertake.

The University has five hours left of its two-day fundraising challenge of raising $200,000 in 48 hours. Show #Love4UW by donating by 2 p.m. today – consider the Communications Discretionary Fund for unrestricted support of immersive undergraduate programs. Give here >>