Artist in Residence Joanne Silberner returned from a conference in San Jose hosted by the Association of Health Care Journalists in late April. Below, she reflects on what she learned and why she says it is important to encourage her students to join professional organizations after graduation:

One great thing about belonging to a professional group – many of them have great meetings that keep you up-to-date with skills and practices after you graduate.

Years ago, I was one of the co-founders of the Association of Health Care Journalists. We had in mind a social club and support group where health care reporters could gather and complain (journalists generally like to complain). Over the years it has morphed into a giant organization with scholarships to its annual meeting. With the support of David Domke, I applied for and won the Leona M. and Harry B. Helmsley Charitable Trust fellowship for students and professors.

In past years, I’ve gone to content sessions – learning how the Affordable Care Act is playing out, what’s going on behind the scenes at the Food and Drug Administration, progress in finding treatments for mental illness, that sort of thing. This year, my plan was to attend sessions on the technology of reporting, so that I could help my students. I’m a little slow technologically, and I was looking forward to learning the latest about social media, and how to use the internet to report and write.

So armed with my trusty (if creaky) Blackberry, I headed to San Jose along with 700 health care reporters and editors. 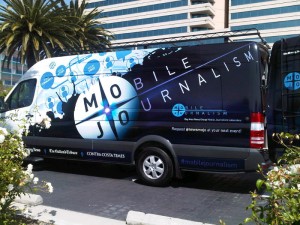 Silberner snaps a photo of the “newsroom of the future” – a mobile van fully decked out with wifi, computers, etc.

I went to a session on what editors want to see in query letters. Where I’ve been teaching short, I learned that while most of the editors concurred, a few wanted long, and there’s really no one formula.

So now I tell my students to look at The Open Notebook or other websites that have successful query letters, or contact anyone they know who has marketed a project to that website, or look carefully at the freelance suggestions on the website. Or call!

And I learned that editors really really want to know if you have photos or audio or video that can be used on the web – I’m going to be more vehement with my students on that one.

At a mobile technology session, I was the only one with a Blackberry, a fact noted in a tweet. My first public shaming!

A session on LinkedIn, a site I’ve long avoided, was helpful. Who knew the site could be used for reporting as well as networking? We heard how an enterprising reporter broke the very secret news that Twitter was about to go public when he noticed that the company had posted an ad on LinkedIn for someone to help with the process. Whoops! And I learned that working journalists can get a free upgrade to Premier. Hooray! Now convinced of LinkedIn’s utility, I’ve updated my biographical information. Next step: a smartphone!

There was a session on how to report about health inequality – local health advocates told harrowing tales of working class people unable to get health care while living in or near Silicon Valley, one of the richest places in the country.

And I heard a talk by physician and author Abraham Verghese about the importance of storytelling.

I came home from the meeting inspired by it all (though as of now I still have my Blackberry). I’m encouraging my students to join professional groups when they graduate. You meet the most interesting people. My favorite from this year’s meeting: a biologist who was wearing a t-shirt to promote his research. The t-shirt said “Ask Me about Fecal Transplants,” and a lot of journalists did just that.