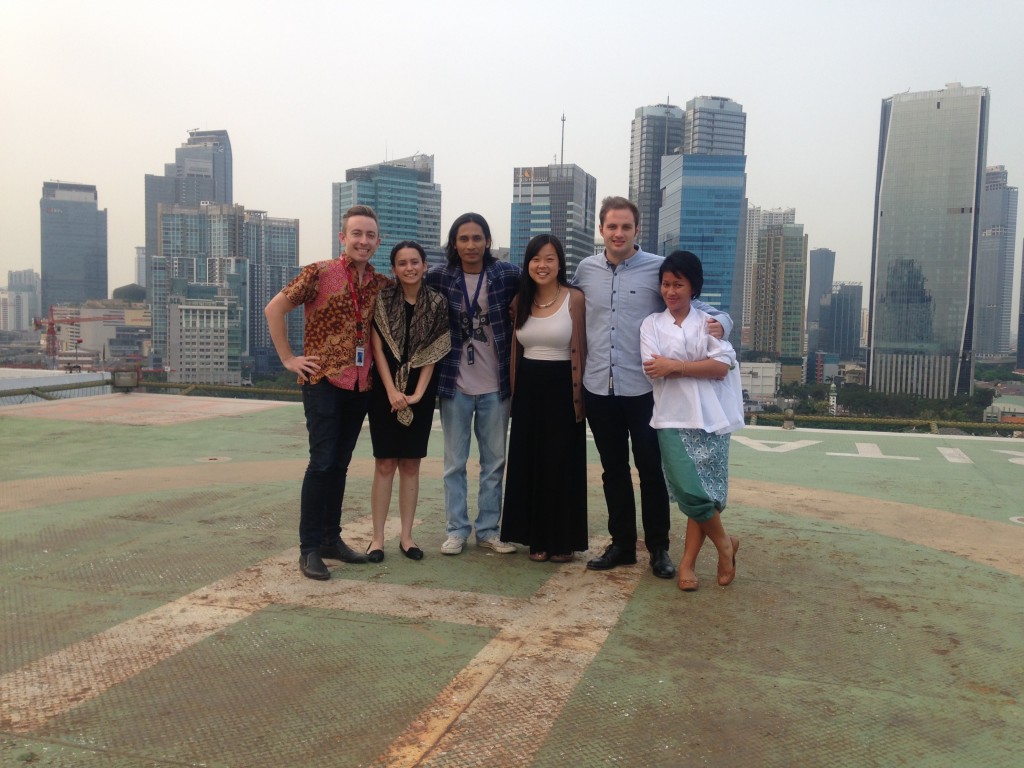 Shirley (third from right) and her BeritaSatu English coworkers atop the building’s helicopter pad, on the last day of her internship

Shirley Qiu spent her last quarter as an undergraduate student in Indonesia, reporting for the Jakarta Globe as part of the Foreign Intrigue program. With a degree in Journalism and International Studies, Qiu is ready for the next step in her career, but first, let’s hear about her time abroad:

What surprised you the most about Indonesia?

“I think I was most surprised by how diverse the nation—and specifically, its Muslim-majority population—is. Sadly, in Seattle, I had little interaction with the Muslim community and was pretty ignorant about the religion in a modern context. So it’s been an incredible opportunity to be immersed in this environment, especially during religious holidays, and learning about the different ways people identify with Islam here.”

“My biggest challenge was definitely the language barrier. I had expected to get some sort of help translating interviews here, but I eventually realized this was an unrealistic expectation, given how busy all my coworkers were already. Thus, my resources were much more limited, and this really slowed down the reporting process.” 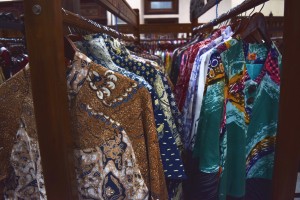 “Not only was it my first, it was my first after nearly a month of reporting, dead ends, losing internet at crucial moments, and running around the city sweaty and unsure of myself. But all the aforementioned frustrations, plus the fact that this story topic genuinely interested me, made its publication all the more rewarding and special.”

“Aside from successes at work, I consider my main victory here learning how to give directions to taxi drivers in Bahasa Indonesia, without Google Translate. Though I’ve only learned the bare necessities of the language and wish I’d learned much more, it’s nice to feel like I’ve adopted the local culture to some degree. Also, transportation here is a struggle on various levels, so feeling somewhat more in control of my commute is a plus.

“In close second is learning to voice TV stories in a way that doesn’t make me cringe (as much) when I play it back to myself.” 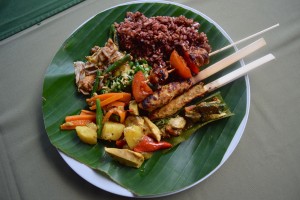 (Really delicious) traditional Balinese food, made during a cooking class in Bali

“One weekend, I went outside the city to meet with some of my interviewees for an article. What was supposed to be a quick interview turned into a half-day affair, when my sources invited me to dine with them. We ended up having a quaint little picnic in the woods, eating rice—with our fingers—that was cooked over a fire pit and served on

freshly-picked banana leaves. The strangeness of the situation made me apprehensive at first, but my hosts’ genuine kindness and hospitality soon turned my skepticism to delight. It was days like those that reminded me why I’m here.”

What are you looking forward to most as you continue your time abroad?

“My time abroad is dwindling unfortunately, but I’ll be stopping in Seoul for a few days before I touch down in Seattle. I’ve never been to Seoul or South Korea, so I’m quite excited for that.”

“I’ve had an absolutely awesome experience abroad! Though I can’t say Jakarta is my favorite city by any means, I have nothing but gratitude and fondness for my time here. To anyone on the fence about Foreign Intrigue or travel in general, I’d say if it sounds scary, challenging, but exciting, go for it—you won’t regret it.”

View of Jakarta from the 48th floor