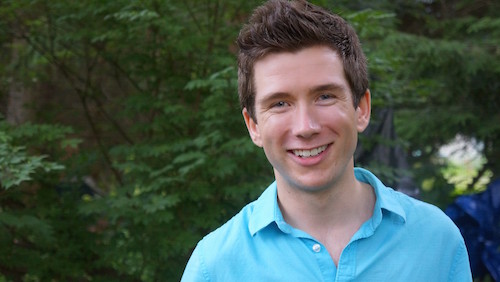 Evan Schmitt (B.A., 2012) was very active during his time at the UW. He rode for the Cycling Club, sang in the Men’s Glee Club, hosted a weekly Electronic Dance Show on Rainy Dawg Radio and interned for the UW Department of Communication. We asked him a few questions to see which route he decided to take after graduation.

“I spent a year and a half on Northwest Public Radio. I was also a Public Address announcer for 5k runs and triathlons. Then I moved to Pittsburgh, got a day job, and started to work on a voice acting career.”

How did you get into this line of work?

“I was getting freelance work and learning more about the world of voice acting. I took a workshop, made a demo, and now have several agents around the country representing me and sending me auditions.”

“Meet as many people as you can and keep in touch with them. Ask how you can help them. Pay it forward as much as you can because it will separate you from the rest of the pack. Learn anything you can through people, books and any ‘free’ resource. Volunteering just to get your foot in the door goes a long way as well. I volunteered for three months before I got my public radio job. Be persistent and prove that you really want to be there.”

What do you think is the single most important thing to do while in school to prepare for the real world?

“Connect with your classmates and find mentors in the career you want. Many are generous enough to give you their time to talk about their career path. Someone probably did the same for them when they were in college. Keep your connections organized and always listen. You’ll be amazed what you’ll learn.”

“Don’t be afraid to fail. It sounds cliché, but it’s true. When you fail, you learn a lot about yourself. You learn how to act in the world and communicate with others. You’ll never know how something pans out unless you say yes and figure it out. You never know who you’re going to meet that is going to change your world. It only takes one person.”

“Well I’m getting married next year so I hope to have children by then. Professionally, I want to grow my voiceover business to a more sustainable level, while maintaining a full-time job. And continue mentoring anyone interested in listening to what I have to say.”

“Be bold. Be polite. Be thankful. Always follow up, because people are busy and maybe they just missed your note. Work smart. Work hard. Develop great listening skills. Carve a sustainable living and go from there.”

Listen to Evan’s voice acting demos at www.EvanSchmitt.com to see what it’s all about!