A group of students spent Fall Quarter in Leòn, Spain learning Spanish, practicing cross-cultural communication, and reflecting on cultural differences. They each lived with local families, immersing themselves in the Spanish culture, but also taking the time to travel to nearby countries. Learn more about their experiences below: 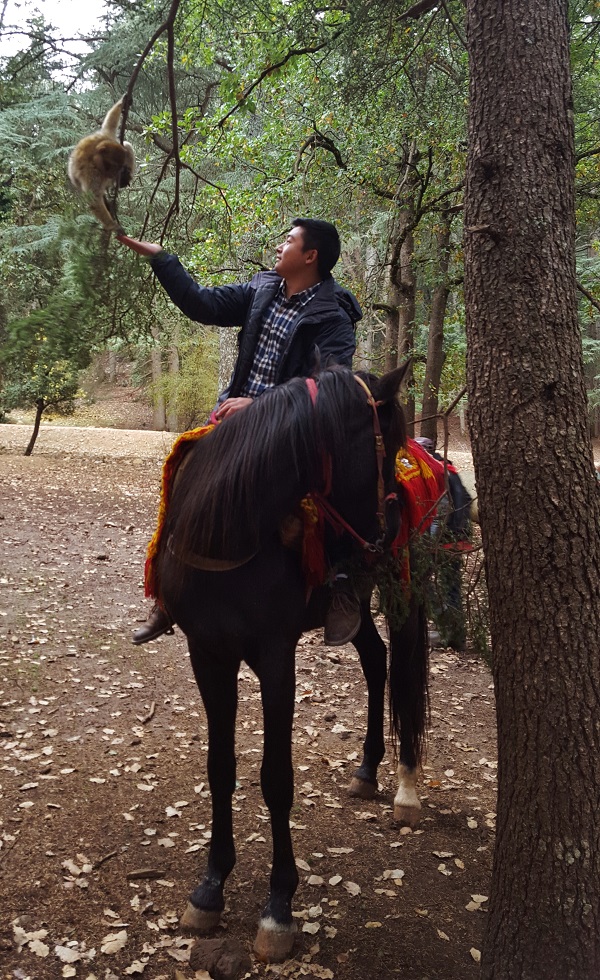 In Morocco, Scott Lee checks feeding monkeys and riding a horse off his bucket list.

My favorite part about studying abroad in Spain was… “having Spanish host brothers who really showed me what life in Spain was like for a college student living in Leòn.

One piece of advice I would give to students studying abroad is… “to be open-minded and flexible with everything that occurs. Whether it be travel plans, living situations, or even the food, it is important to adapt and take everything as a learning experience.”

The most important thing I learned was… “Anything can happen – the only thing that can hinder you is yourself and your mentality.”

Did you find anything surprising when working on your project comparing media content produced in Spain with that of other countries? “The Spanish culture is generally more open to sexuality than the American culture, and so it was surprising to see that American pop music videos and Spanish pop music videos on average had about the same amount of sexual content.”

Anything else to add about your experience abroad? “When travelling to other countries, it’s important to make a strong effort in learning a country’s basic language and customs. Learning a few words can differentiate you from the other tourists that the locals often run into and it may play in your favor.” My favorite part about studying abroad in Spain was… “the freedom that the country provided. We could do whatever we wanted without anyone stepping in and giving us boundaries.”

“Additionally, it helped me see different realities, in particular with the culture being much more open-minded and willing to welcome people (like refugees) with open arms. One of my favorite memories while walking throughout Madrid was seeing massive signs with the words ‘REFUGEES WELCOME’ and I felt so much happiness because of the humanitarian efforts happening.”

One piece of advice I would give to students studying abroad is… “to bring some sort of hot sauce because you will eat bland meals and it will be almost impossible to find anything spicy enough.”

The most important thing I learned was… “that in Spain family culture is much more important than work culture, and people are content with their lifestyles regardless of their socio-economic status. Although very opinionated, Spaniards are very welcoming and loving people and have strong bonds with everyone.”

Did you find anything surprising when working on your project comparing media content produced in Spain with that of other countries? “Yes, at first my group and I thought that music videos in Spanish would have more sexual content due to the lyrical content but as we were coding our findings it seemed that English (American) music videos were much more sexual. After completing our coding, our results showed no significant difference between the two languages in the four of six variables we coded for. The variables with no significant difference were: fashion, amount of clothing present on body, dancing, and touching of the body. The results showcased that the two variables with significant difference were gender and dismemberment of the body; Spanish music videos had more male leads and more dismemberment of the body than English (American) music videos.”

Anything else to add about your experience abroad? “Overall, my experience abroad was fascinating and I am deeply grateful for having the opportunity to travel abroad. Within the last three and a half months I visited 12 different countries, met people from so many different countries, and experienced the lifestyle that Spain has to offer. Experiencing Spain and the rest of Western Europe is something I will cherish and will never regret doing.” Brianna Lewis takes a trip to the Colosseum in Rome, Italy.

My favorite part about studying abroad in Spain was… “Getting to know people that I wouldn’t have gotten to know otherwise, and learning Spanish.”

One piece of advice I would give to students studying abroad is… “to have an open mind and face the challenges with a positive attitude. Try to learn something new every day – don’t just sit in your room being nervous about getting lost. Adventure and explore – enjoy yourself and don’t get too caught up in studying…but study too!”

The most important thing I learned was… “I think Spanish was really important to learn. But also perseverance, and sticking it out on those days that can be tough.”

Did you find anything surprising when working on your project comparing media content produced in Spain with that of other countries? “I looked at the covers of Vogue magazine during 2013 and 2014, specifically Spain and the U.S., and I think a lot of people were surprised to see that plus-size models weren’t present in either magazine – which is interesting considering how many ‘plus-size’ people are in America. The covers weren’t very representative of the general population. Generally, Spain and the U.S. were pretty similar in aspects of racial representation on the cover.”

Anything else to add about your experience abroad? “Making and keeping friends can be hard with homestays because we don’t see each other every day. But overall, it was such a good experience and I would definitely do it again if I could. It has made me think so much about interning or living abroad in the future – or that it’s even an option.” 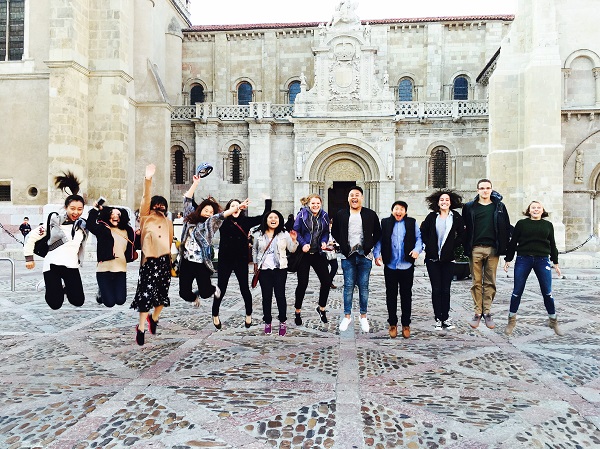 During one of the first weeks in Leòn, Mallory (far right) and the group finish a tour of the church behind them called San Isidoro.

My favorite part about studying abroad in Spain was… “being immersed in a new culture and language. It’s also really cheap to travel in Europe so my friends and I went somewhere new almost every weekend.”

One piece of advice I would give to students studying abroad is… “to go out of your way to talk to locals and try to speak their language, no matter how bad you are at it.”

The most important thing I learned abroad was… “that there are kind people who are willing (and excited) to help you everywhere you go. The ‘Seattle Freeze’ doesn’t really exist in Europe so prepare yourself for your personal bubble to shrink a little bit.”

Did you find anything surprising when working on your project comparing media content produced in Spain with that of other countries? “Because of the lack of censorship in Spain, I thought there were more differences in the amount and types of sexual content in American and Spanish music videos. But the differences were, for the most part, not statistically significant.”

Anything else to add about your experience abroad? “It’s super cheap to travel in Europe, so anyone studying abroad in Europe should take advantage of that. I visited 9 countries and 20+ cities during my three-month-long study abroad program.”

“It’s important to avoid being ‘that American’ who only speaks English and refuses to interact with locals. Even if you feel like an idiot, just try to speak the local language and the locals will be appreciative of your effort. To get the best advice for things to do and places to eat you have to talk to local people anyway. Be confident and just do it! Some of my favorite memories from Leòn involve interactions and friendships I built with locals.” 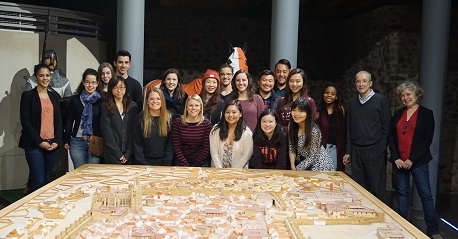 The group at the UW Leon Center in December.

My favorite part about studying abroad in Spain was… “meeting my awesome host family – they treated me as their real daughter and we really love each other. Now, I have a new family in Spain and if I have another chance to visit Europe, I will definitely visit them again.

One piece of advice I would give to students studying abroad is… “to try to speak the local language as much as possible. Eating meals with your host family really helps you to learn their culture and habits. Travel a lot and have fun!”

The most important thing I learned was… “It is very important to explore the world when you have enough passion and energy. Through the journey I kept asking myself what kind of life I really desire. Studying abroad is a chance to see the outside world and give me time to think.” 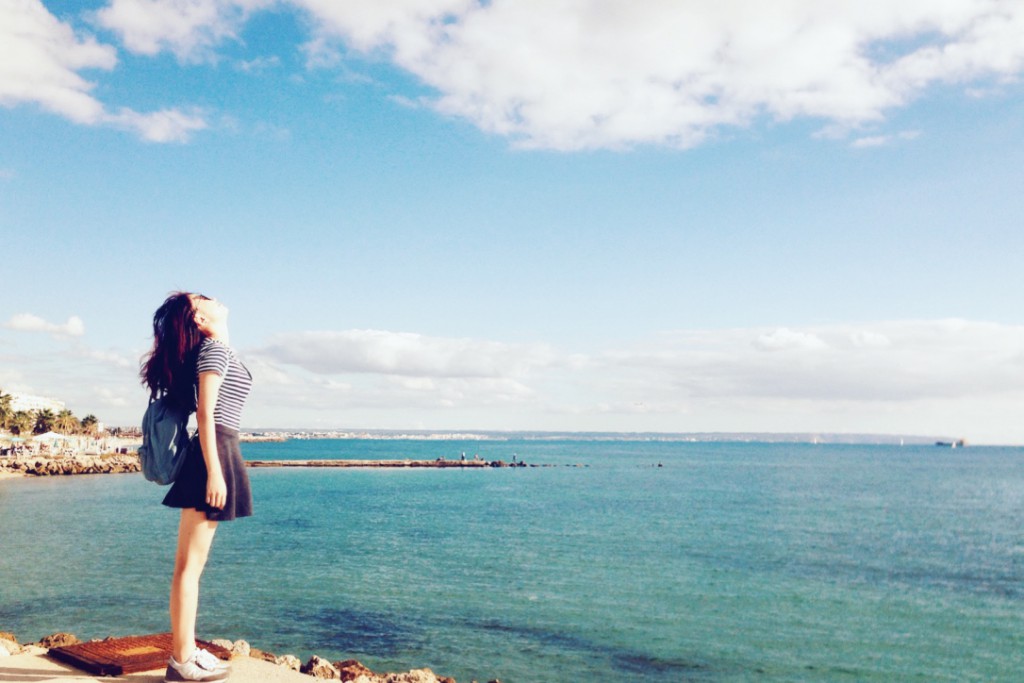 My favorite part about studying abroad in Spain was… “getting to know more about myself and the world.”

One piece of advice I would give to students studying abroad is… “be confident in talking to people!”

The most important thing I learned is… “to enjoy myself – try to explore the local area and travel around to different places.”

Anything else to add about your experience abroad? “It’s an amazing experience – highlight of my life.”