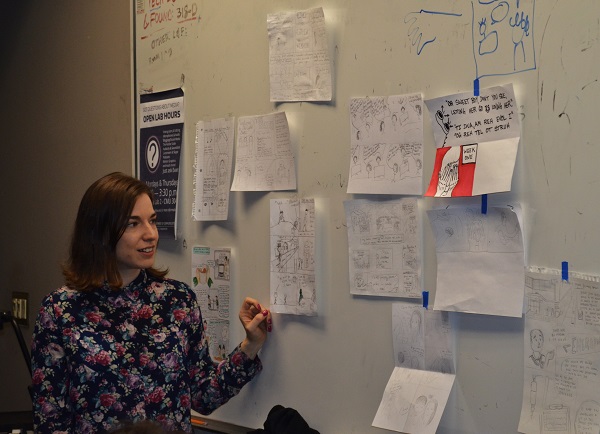 Sarah Glidden reviews comics by the students at the final workshop of the quarter.

For three Fridays this quarter, students in the UW Department of Communication joined cartoonist and writer Sarah Glidden for a workshop on comic journalism.

The one-credit class allowed students to tell true stories in a medium usually reserved for superheroes.

“I got into this doing memoir comics,” Glidden said, “and then I started learning more about comic journalism.”

Glidden’s notable works include a graphic novel based on her birthright trip called “How to Understand Israel in 60 Days or Less.” She also has a forthcoming comic book entitled “Rolling Blackouts” about a trip with UW faculty members and Seattle Globalist founders Alex Stonehill and Sarah Stuteville to Turkey, Iraq, and Syria.

The students discussed a variety of published comics and analyzed them for content and structure.

“During critiques, Sarah was really interested in getting the students engaged with the content. We talked a lot about basic elements such as styling bubbles, formatting a clean page, and leading the reader through the comic,” said UW Comm senior Lindsey Boisvin, who plans to write a children’s book after graduation.

Students also tried their hands at creating their own comics, which were reviewed in class on March 4. The students’ content varied widely, from conversations with friends at happy hour to issues of gang violence in Tacoma.

“The assignment was to interview somebody in a journalistic way and make it into a comic,” Joanna Kresge, another senior in the UW Comm Department, said. “During the interview, my subject had a powerful quote that really stuck me, so I knew I wanted to draw that.”

Like many students in the class, Kresge’s comic was informed by other work she is doing in the Department. Kresge initially conducted the interview she used in her comic for a video project. She said the visuals stuck with her and she could easily consult her B roll to craft the images in her comic.

For Glidden, comics are a largely untapped form of communication for journalists and other nonfiction writers. Like photography, film and mixed media, comics have the potential to explain complex or unique material in accessible ways.

“In the last five years, there’s been kind of an explosion,” she said of comic journalism. “We’re still kind of trying to convince people we’re journalists who have ethics and are careful with what we do… We are fighting this perception that, ‘Oh, comic means funny.’”

“It definitely attracts people’s attention. A lot of comic journalism is passed around the internet,” Glidden added. “Comics can be a great way of breaking things down and making it interesting to them.”

Written and photo by Eleanor Cummins