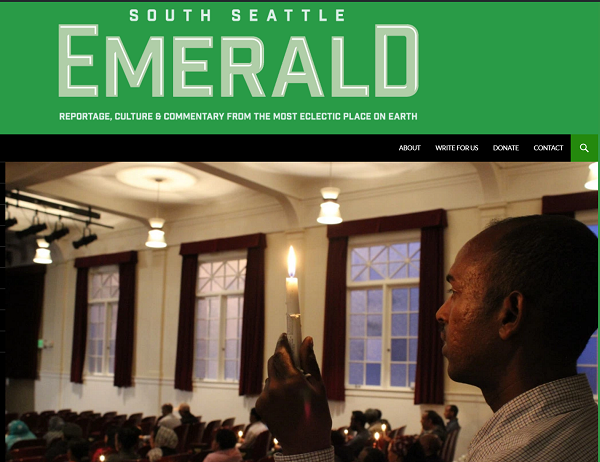 Agazit Afeworki, who finished her credits this past December, was placed in this year’s Hearst Awards Multimedia News Competition for her work reporting on the Eritrean and Ethiopian communities. She placed 14 among more than 100 applicants from across the nation.

“I think this award reflects Agazit’s hard work, but it also shows our journalism program’s dedication to teaching multimedia storytelling to our students,” said UW journalism lecturer Caley Cook. “This is the third Hearst Awards placement we’ve had in multimedia categories in the last three years, which, for a small program like ours, is a testament to our dedication to telling stories across many platforms.”

Cook said Afeworki has a quiet and confident presence in the classroom and in her journalism work – making thoughtful connections to people whose stories she tells and leading to excellent journalism. Afeworki’s written article and two and a half minute audio piece, which covered two vigils proceeding one of Isis’ documented beheadings of Eritrean and Ethiopian emigrates, was published in the South Seattle Emerald.

“The story was particularly difficult for me to write for a few reasons: I wanted to cover the events fairly and objectively, though being Eritrean I was inherently connected to the community,” she said. “I also knew that by being fair, what I published could be controversial. Lastly, I knew there was a possibility that what I mentioned could compromise my position within the community amongst those who disagreed with what transpired at the vigils.”

With the aim to work at a magazine that is “always on the brink of style culture and that rallies readers behind compelling features and visuals,” Afeworki has been freelancing, interning at GRAY Magazine, and working in Space (a department in Nordstrom that carries emerging and advanced designer collections curated by Olivia Kim).

“I was very honored, any sort of accomplishment is honoring,” she said when asked about the Hearst placement. “It’s affirming to receive such an award early into my career.”

Cook reminds UW journalism students that these awards are not just won by the top one percent at big journalism schools, and stressed the importance of putting your work out there.

“I think journalism students can be really self-critical, which is great sometimes to challenge you to do better things, but it’s also dangerous because it often doesn’t allow students to stop and really consider the wonderful work they’ve produced while in our program,” Cook said. “And so much of the work our students produce is absolutely phenomenal. I hope more students consider nominating themselves for things like Hearst Awards in the future – to embrace the great work they are doing.”