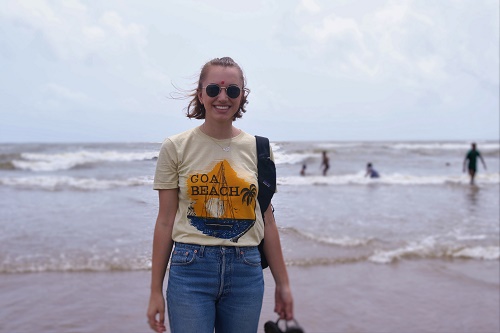 Kate Clark spent her last quarter as a University of Washington undergraduate student in India as part of the Foreign Intrigue program. With degrees in Journalism and International Studies, Clark is ready for the next step in her career, but first, let’s hear about her time abroad:

What surprised you most about India?

Honestly, what has surprised me most about India is its thrilling and sometimes frustrating ability to continually surprise me. Just when I think my routine is down or my schedule is set for the day there will be a massive strike and all public transportation will be shut down, or there will be cows sleeping on the sidewalk on my normal route to work so I’ll have to walk amidst traffic or even better, I will slip on a dead rat and well, that doesn’t change my routine, but it’s no fun. India is the most unpredictable place I’ve ever been. I’ve become accustomed to its unpredictability though. Now, instead of setting agendas everyday like I normally did back home, I just wait and see. I’m lucky in that I’ve had almost no language barrier. Almost everyone I’ve interviewed spoke fluent English. So, the biggest challenge for me is not having the cultural and historical context everyone else has. Going into interviews, I have to prepare 10 times more than I would normally have to. There is so much more to every story than is on the surface and what is innate knowledge to everyone here is entirely foreign to me. This has meant that a story that I could normally crank out in a few hours will end up taking me two or three days. Lots and lots of Google searches.

I wrote a story for both Citizen Matters and The Seattle Globalist about the similarities and differences between Seattle and Bangalore. I wanted to write this story because both cities have had pivotal roles in the global tech-boom and it turns out there is definitely shared experiences. Click here to read the article.

What successes have you had so far?

Just because this entire experience has been so far out of my comfort zone I really think every day has been its own success. The moments when I realize how comfortable I am doing something that a few months ago was something I’d never done or maybe never even heard of are the moments I realize just how much I’ve grown from this experience. Like negotiating with auto-rickshaw drivers or debating something an Indian politician said with someone in my office. The smallest things, whether or not they feel that way in the moment, will definitely be things I consider big successes when I look back on this experience. I remember the first week I was here I had to go and get passport photos taken because they needed them in order or me to get an Indian phone. After successfully doing that I remember feeling very accomplished. Something that is as easy as walking into Walgreens proves to be hugely challenging when you don’t know where to go and you don’t speak the language. So when you overcome those barriers and you have that tangible proof, it is really satisfying. 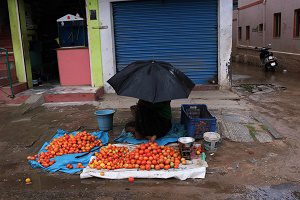 I actually have two stories.

My first week here, before I realized that instant coffee was going to have to be my best friend, I walked like 20 minutes every morning to get to a McDonalds where they had American/Western coffee. This was seen as incredibly bizarre behavior by all the Indians I lived with. After a week they told me where I could buy instant coffee and I begrudgingly gave in. But it didn’t stop there. In the days that followed they all very closely observed my coffee intake and made it explicitly clear that I drank a lot, actually, way too much coffee. To this day they will make jokes about how much coffee I drink and even go as far as to measure it! Who knew my coffee addiction would be so fascinating.

Second—it’s monsoon season here and on the two, only two, days that I have forgot an umbrella, which is as necessary here as shoes (actually more necessary because going barefoot is very common), I have been caught in the rain. Getting caught in the rain in India is nothing like being caught in the rain in Seattle. I’ve thought several times about how when I get back to Seattle I’m not going to bring an umbrella or rain coat with my anywhere because Seattle rain won’t seem like rain at all. I won’t even notice it after getting stuck in rain storms in rain so heavy it could bruise your skin. Anyway, last week I got stuck in the monsoon and was so sopping wet I could have easily just climbed out of a swimming pool or bathtub. I ran down the street looking for a place to wait out the storm and ended up knee deep in “puddles.” Finally, I found a café to hide in. I walked in and the cashier silently handed me some napkins. Somehow, I was the only person in there that was wet at all. I remember thinking I should have just worn a t shirt that said “foreigner,” not that it isn’t already evident.