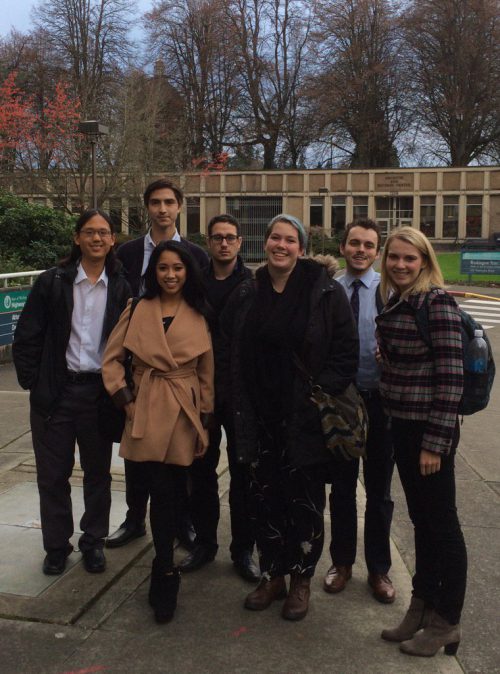 A new pack of students has been selected for the 2017 Olympia Legislative Reporting Program, designed to immerse students in paid, full-time reporting jobs each Winter Quarter with news outlets covering the Washington State Legislature.

This year’s participants will travel to Olympia throughout the Winter 17 quarter to report on the people and issues that are shaping the creation of State and local policies.  “The cogs in Olympia’s political machine are many,” said student reporter Tim Gruver (Washington Newspaper Publishers Association, Olympia Bureau), “and should I walk away with a greater understanding of the people and concerns that make up our great state, I would consider that an immense achievement. If democracy is anything like my bedroom, it’s messy, unruly, and we might never organize every pile, but we should at least know where everything is.”

Other members of the program are eager to learn more in depth reporting skills. Starla Sampaco (TVW), recently featured as a part of the University’s #Be Boundless campaign, says she applied for the program due to its emphasis on video production. “I want to gain video reporting skills that I can transfer from my internship at TVW to my career as an on-air reporter,” she explains. “I got my first real glimpse of political reporting as an intern at KING 5 […] I was always on my toes — so much multitasking! I loved every minute of it. Helping KING 5’s coverage of the local, state and national elections made me even more excited for Olympia.”

For students, this 40-year-old program provides incomparable training in public-affairs reporting. Members work directly alongside professional journalists as they cover government for readers around the state and region.

“I’m looking forward to engaging on a day-to-day basis with legislators and activists who are working hard to improve the lives of the people in their communities and shape the future of the state of Washington,” explained Enrique Pérez De La Rosa (Washington Newspaper Publishers Association, Olympia Bureau). “The legislative process is maybe the most powerful force that can affect the lives of Washingtonians for better or worse.”

Matt Spaw (Washington Newspaper Publishers Association, Olympia Bureau) says his interest in political reporting stems primarily from the critical thinking necessary to comprehensively cover complex issues. “I know it will challenge my skills as a journalist, and the best way to become a better reporter is to do difficult reporting!”

“I think political reporting remains essential to creating a well-informed public, now more than ever,” insists Jeanie Lindsay (Northwest News Network). “What we’ve seen in our government and in politics over the past few years has been eye-catching, but we still need to let people know what is happening on a state-level and why those issues matter.”

“The students participating in the program this year will double the size of the full-time press corps in Olympia,” noted Austin Jenkins, statehouse correspondent for the Northwest News Network. “That is a significant presence and service to the public.”

You can follow the 2017 reporters via their Twitter feeds, linked above. The Department will also feature interviews with program members throughout the quarter.