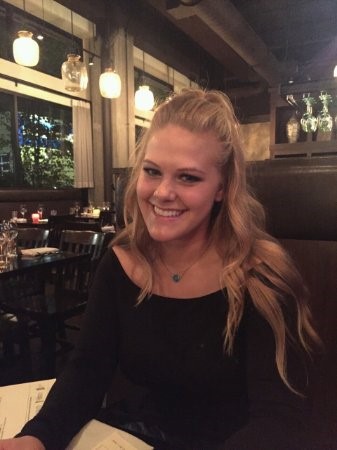 A word to the wise: do not get into an argument with Victoria Braun. With a stunning performance during the most recent Cross-Examination Debate Association (CEDA) tournament, the Communication senior recently led the UW Debate Union program to victory as the 2017 Novice National Champions. Braun partnered with a competitor from James Madison University to defeat Liberty University (VA) in the final round of March’s competition.

Prior to Braun’s latest success, her path to debate glory included a few detours. After initially leaving the University of Washington, she attended a community college before returning to campus. Inspired by her experiences during COM 234, she approached Michael Souders last spring about joining the debate program.

“I told her she still could compete–our program is open to everyone, at any point in their undergraduate career,” Dr. Souders explained. “She competed in three competitions this year before nationals. In her first tournament in October, she lost 75% of her debates. However, she stuck with it; she has done more practice debates than any novice competitor I have ever had.”

Braun’s final speech in the CEDA tournament centered on the topic of climate change. She won by arguing that implementing a climate policy in the United States would push out China for a climate leadership role, in turn collapsing the CCP. By increasing Chinese leadership in green technology to fight climate change, it would help transition China’s government to a more stable, open structure.

Why did you want to join the UW Debate Union?

“When I came back to the UW I decided that I really wanted to do something new and turn my experiences at the UW into a positive one. I had never seen myself as a debater, but I wanted to try something new. Mick’s class [COM 234] was my first course in the department, and I just loved his humor and his passion for debate. It made me interested in learning more, especially after we would watch political ‘debates’ and Mick would tell us that real debates are so different from what you see on TV. I did not know what I was getting myself into, but I found out I really love debate. I guess I like a good challenge.”

What does it take to be a successful debater?

“It’s funny, because in debate there is a technique called ‘spreading,’ which is essentially talking really fast when giving your speech. It is not what most people expect, and it is not what I expected, but it is a lot of fun. However, what I think makes a good debater is being able to slow down for a second and think through things. I do not know everything, and there is no way to prepare for every detail and argument, but you have to give yourself the time to piece together what you need to say in order to counter your opponents. Of course, there may also be moments when you have to wing it. During those times you have to remember that everyone in the room is super smart, including you; it is just a matter of being able to articulate it.  You only get ten minutes of prep time the entire round, so it can be crazy.”

What has been your greatest challenge at UW?

“During freshman year, I changed my major all the time, even though I always had this underlying desire to do communications. At first, I tried to focus on science, but then I finally took the plunge and came back to the UW and do what I love. I just had to get over that initial uncertainty, which was hard. Even during my first debate, I did not understand the format and I needed extra prep time, but I got through it, and that has made all the difference.

Debate has been rewarding because I have done something that I feel many people will never do. It pushed me way out of my comfort zone and taught me so much. It helped with many of my classes too, including international studies, because we had been discussing many of those topics all year during debate. Even when writing my papers, I notice I start out as if I was going into a debate; it helps me structure my thoughts. Debate also makes me feel like I did something decently cool during college.”

What do you envision doing with your Communication degree after graduation?

“I would love to do something that bridges communication and sustainability. I have talked to the career center about opportunities available in communications and corporate responsibility. In fact, one of the reasons why I wanted to do debate this year is because I found out the topics revolved around climate change, which is a huge passion of mine. Eventually, I would like to come back to the UW and get my masters in environmental studies.”

What have you learned during your academic career that you want to share with other students?

“I try to get people to join the department because I just love all the classes. I love my studies in particular because they are applicable to everyday life. I feel like everyone could benefit from taking communication classes because you can utilize these skills right now. In addition, with debate in particular, I have gained these great research skills, and through preparing for various debates, I have learned so much about the world itself. I feel like these courses are really life changing.

Therefore, I would tell students not to be afraid of trying new things. Especially if they are interested in things that seem too difficult at first, like debate, they should go ahead and do it; they should go to at least one tournament, practice their speech drills and not quit. There are so many more pros than cons. If you lose, then you lose; it is OK because you will still learn so much just from the experience.”