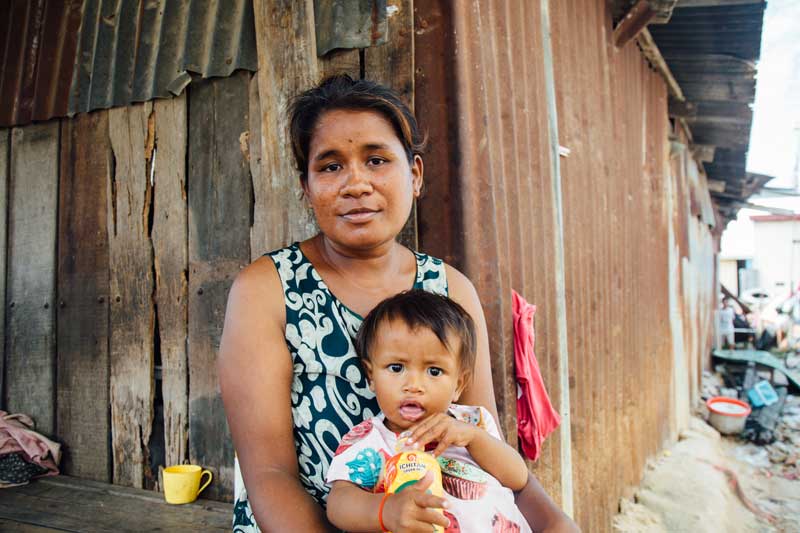 When I set my sights on reporting in Cambodia, I was driven by the anti-media rhetoric of recently-elected President Donald Trump and claims that his administration could herald autocracy in America. I wanted to experience reporting in a true autocracy, where the free press fights to fulfill its watchdog role and keep the government accountable.

In July, I traveled to The Cambodia Daily, a newsroom that prided itself in reporting “without fear or favor;” denouncing abuses of power by high-ranking officials and giving a voice to those losing homes and livelihoods due to corruption.

After two months of reporting for the paper, my internship took an unexpected turn as it was shut down in a widespread government crackdown on free media and civil society.

In the wake of communal elections (similar to county elections in the US), where the leading Cambodian People’s Party (CPP) obtained only 60 percent of the popular vote, CPP leader and Prime Minister, Hun Sen, embarked on a sudden and widespread effort to silence dissenting voices.

An exorbitant $6.3 million tax bill delivered the paper’s final sentence, which the Daily and critics alike insist was politically motivated. Failure to pay the invented sum led to the Daily’s closure on September 4, 2017. 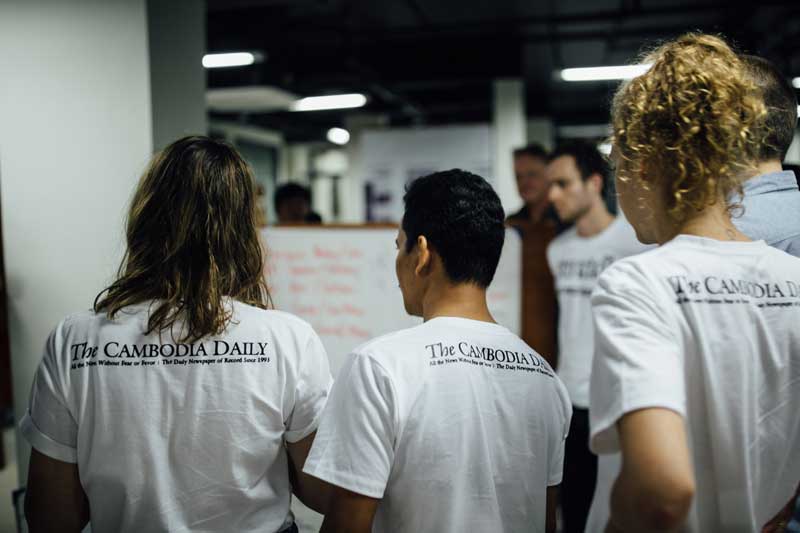 However, the Daily was not the only media outlet to face the censorship. About two dozen FM radio stations, which were airing the Cambodian radio broadcast, Voice of Democracy, and the US-funded Radio Free Asia and Voice of America, were also ordered to either shut down or comply with government demands for coverage. A week prior, the prime minister expelled all foreign staff of the U.S.-affiliated National Democratic Institute, giving them a week to leave the country.

The crackdown peaked when opposition leader Kem Sokha was arrested on charges of treason, and accused of colluding with the United States to topple the government, effectively muzzling the only party with a chance of putting an end to Hun Sen’s 30-year rule in next year’s election. Since the Daily’s closure, the government crackdown has only intensified.

In the span of a few weeks, I watched free press and the mirage of democracy in Cambodia quickly fade. As one last parting shot, the Daily used its final front page to label the crackdown a “descent into outright dictatorship.”

Even in my short time at the Daily, I’ve seen our reporting have a tangible impact. When two of my colleagues wrote a story about a government official who had trafficked a 16-year-old girl to Saudi Arabia, their coverage got him fired.

I even had the satisfaction of seeing my own reporting create some change. After writing a series of articles on a popular Cambodian TV news host who commented on the rape and murder of an 18-year-old woman and remarked on live TV that a rapist and murderer should leave his victim alive to “keep her for using again,” the host apologized publicly to the victim’s family and women’s rights NGOs.

The Daily’s newsroom on its last day of operation is a scene I won’t soon forget. Kem Sokha’s arrest took place at 12:35 a.m on September fourth, just 12 hours before the Daily’s final print deadline. A team of our reporters had worked through the night to track down Sokha’s whereabouts and were joined by the rest of the staff in the morning to publish updates in a live blog. 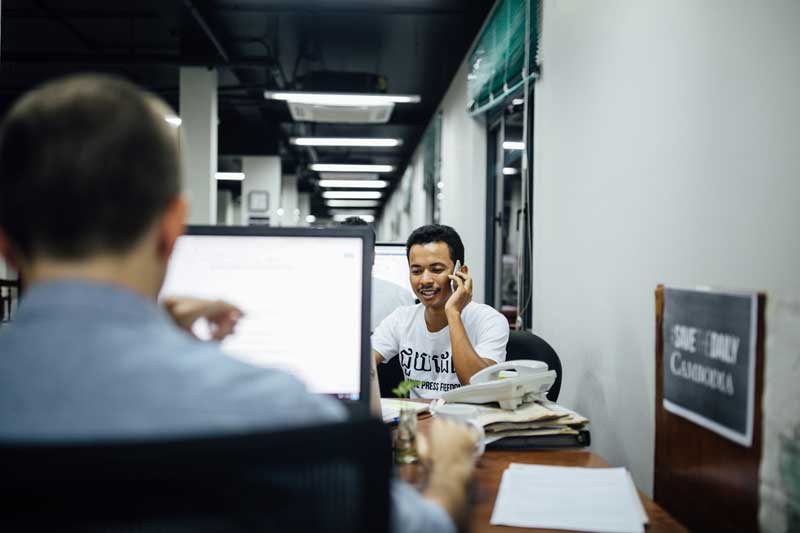 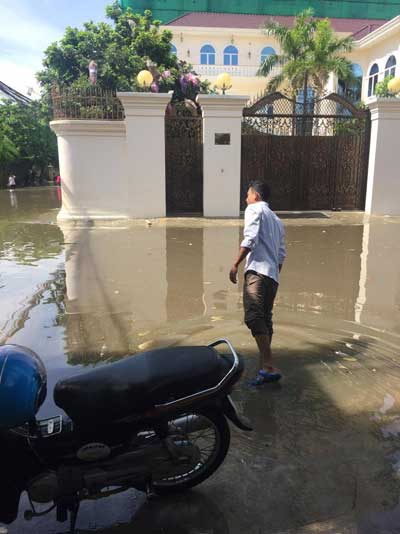 The Daily’s office whirled with the characteristic flurry of a newsroom– a blur of reporters running to catch phone calls, flipping through documents, and calling on each other for the contacts of government officials or NGO leaders.

As my first time reporting on international breaking news, assisting in the coverage of Sokha’s arrest will be a highlight of my time in Cambodia. To help piece together the whirlwind of events, a Cambodian colleague and I headed out to seek information at Mr. Sokha’s home, where his arrest had taken place.

We tanked through flooded-streets on a motorbike. With trash floating lazily by in the murky water, we weaved through flood-induced traffic jams and dodged stalled vehicles. Soggy, yet still running on the day’s adrenaline, we reached the opposition leader’s residence and interviewed his bodyguards about the timeline of his arrest.

It has been difficult to watch this rapid downward spiral in a place that has quickly come to feel like home.

When I first arrived in Phnom Penh, the absolute madness of the streets, with motorbikes whizzing through lines of nearly stationary cars and hordes of cart vendors occupying sidewalks, made getting settled here a daunting task. But I soon joined the ranks of two-wheeled commuters, and learned the ebb and flow of the city’s streets astride my hot-pink vespa. Almost without noticing, Phnom Penh began to feel more like a town than a city as I found my go-to spots and picked up some basic Khmer.

My colleagues at the Daily immediately gave this foreign place a sense of familiarity, tirelessly answering my endless questions and welcoming me into the Daily family. Each of them has imparted some piece of knowledge, acting as catalysts in my development both personally and professionally.

The people of Cambodia, characteristically friendly and welcoming, made my transition a smooth one. Cambodians never fail to impress me with their generosity– once, as I was driving down a main road, my scooter inexplicably shut off. Seeing my bewildered and unsuccessful attempts to get it started again, a few street vendors ran over to help.

Getting to know Cambodia has been an extremely rewarding, but not necessarily always comfortable, process– providing ample opportunity to check my privilege. 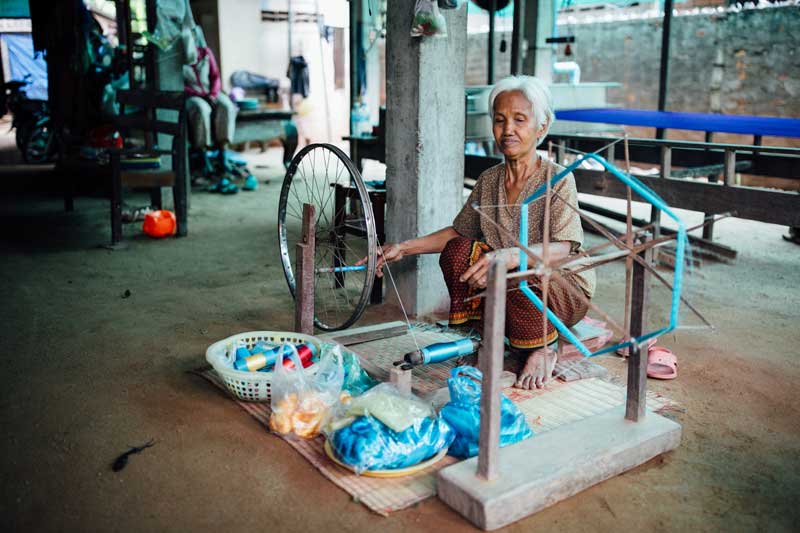 I quickly discovered an example of Phnom Penh’s poor construction when my sink fell off the wall and shattered at my feet while I was showering. Weeks later, while taking a trip to a rural province with two of my colleagues, I found myself standing in our homestay’s restroom, confused by the absence of anything that resembled the showers I’d seen in Cambodian homes in Phnom Penh. I called to my Cambodian colleague Len and asked about the shower– she responded by picking up the bucket at my feet. 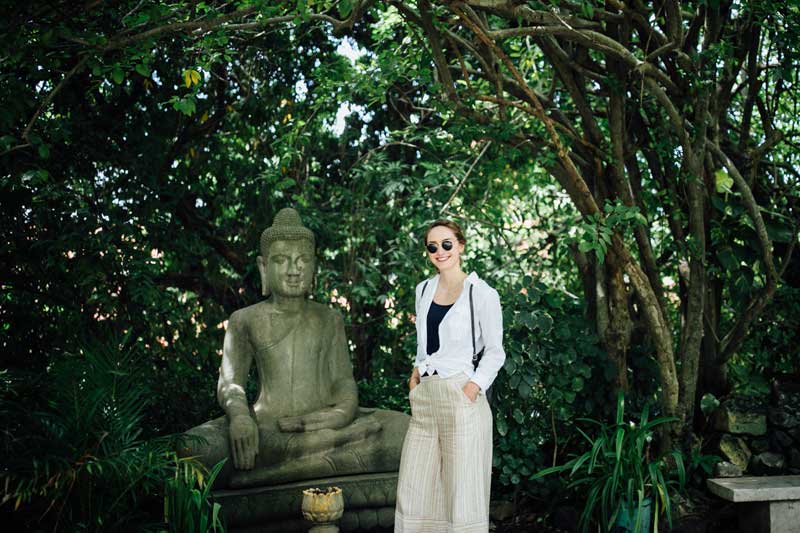 Reporting for the Cambodia Daily and watching the disintegration of free press in Cambodia has not only cemented its importance in my mind, but showed me how quickly it can be lost.

As possibly the last UW foreign intrigue reporting fellow to write for the Daily, I’ve had the unique opportunity to witness how easily free press can disappear in “a country moving backward, in a world that is moving backward,” as Jodie DeJonge, the Daily’s former editor-in-chief, described it.

With Trump continuing to spew damaging rhetoric concerning media in the U.S, Cambodia can serve as a cautionary tale. My time at the Daily showed me how essential, yet fragile, freedom of the press is– and imbued me with a drive to preserve it in my own country. I can only hope that the Daily will one day reopen, and future UW journalism students can have a shot at this incredible opportunity.