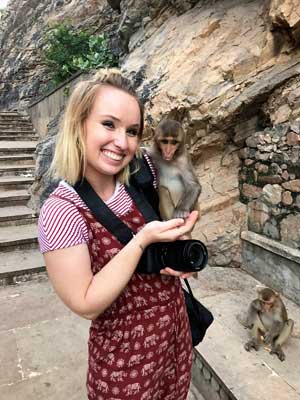 It was 6 a.m. on a Sunday morning in mid-July that I found myself covered in mud; toting around a tripod and camera and jumping around puddles; swerving around two cows, and eventually sitting in a nice apartment eating home-cooked Indian food. That morning was not unusual when it came to my internship at Citizen Matters, an online news magazine in Bengaluru, India. I spent most of my time reporting by wandering around until I found the correct location, talking to people who insisted on providing me with a meal (one obvious cultural difference between Indian and American reporting ethics) and finding myself in a place I would never have imagined I would be.

For this particular story, I spent the entirety of my ten-week internship doing extensive reporting to produce a three-part solutions journalism piece on Bengaluru’s lakes; a hot topic in the city, and one that proved to be much more extensive than I could have guessed. This included taking my own photos, writing long-form pieces, and producing a video while talking to people all over the city and becoming a temporary expert on lakes. Of course, this was not the only project I worked on, but it was one I consistently worked on until my last day in Bengaluru. It was definitely the most in-depth project of my internship. 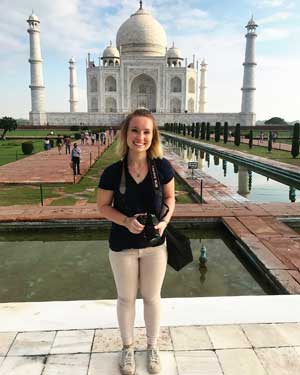 That particular morning was one of the many weekends I spent going to different lakes to talk to community groups cleaning the area. I got right up in the action to catch people on camera wading into sewage infested water, and puling armfuls of garbage or weed from the lakebed. This morning, however, was different. I set out with one of my housemates and good friends to interview and record a community group who spent every Saturday and Sunday morning cleaning their neighboring lake. After an hour-long Uber ride, which was considered short and sweet for the rapidly growing, traffic congested, 10-million populated city that is Bengaluru, we arrived to find a group of almost forty people cheering and chanting at their progress.

What sets the Bengaluru stories apart from others I have produced in the past is their ability to make me feel that I have accomplished more as a journalist than ever before. India could not be more different from Seattle, but while reporting on stories like the lake cleanup, I learned that the people behind solving issues like water shortage, waste management and LGBTQ rights in India, are some of the most passionate with which I’ve ever worked. It’s a challenge to convey the true meaning of an issue with which one is unfamiliar, but it is a “whole new ballgame” when trying to do this when the issue does not affect your daily life, or when you are not inherently aware of the story’s impact. And while reporting in India built up my confidence, it also was an experience that knocked me down a few pegs. As everything takes longer to understand and communicate, I had to learn to be more thoughtful in my background research, spend more time pre-reporting, and asking for more help than I would have when writing a story at home. But ultimately, the best part about reporting in India was that feeling of accomplishment. So much work went into each story and I was proud at the end of the day to have completed something I never thought I would, and understand issues that I never realized existed. Aside from making me a more conscientious journalist, my time in India has made me a more confident person and a more self-aware global citizen.

Before I left for India, if you asked me what I thought working in Bengaluru would be like, I could not even come close to guessing what I have since experienced these past weeks. I couldn’t have imagined that I would walk into the state government offices to ask questions on liquor bans, attend a composting fair, talk to African women about their feelings on living in India, attend seminars on social media in newsrooms and LGBTQ media portrayal, learn what communities are doing to solve their water shortages, or capture the images of the people behind an extravagant flower show.

In just ten weeks, I learned more about journalism than I ever thought possible. I attended workshops, spoke to change makers, worked with different reporting styles, and learned about issues that define a city, which now holds a special place in my heart. Even though I was late to every single interview, the result of trying to navigate a foreign country, and I had to write in British English, the work I did in India introduced me to a new view on journalism and allowed me to produce stories that impacted people on the other side of the world.