From the moment I was accepted to the journalism program at the University of Washington a year and a half ago, I had my sights set on the Foreign Intrigue scholarship. The pamphlet they gave me said the scholarship offers financial support for six lucky students to be sent abroad to work at English-language news companies. Unlike the usual study abroad experience, each student would be sent to different countries, all alone, with only their luggage, their ambition, and their worries for company.

When the application opened back in January, I was hesitant. At that point, I only had one quarter in the major under my belt, and hardly any experience. It didn’t help that I can be prone to self-doubt. But with the nudging of my parents and a can-do spirit that surfaced inside of me at the last minute, I applied. A few weeks of anxious waiting passed until I got the email—it said I had been accepted and that three rounds of interviews were waiting for me. After the third and most intensive interview, I got an email saying that I was chosen to go to Jakarta, Indonesia.

Of course, I was proud and excited; but I really didn’t know what to expect. As a commuter student, I had never spent more than a week away from my parents. It would also be my first true glimpse into what it means to be an independent adult.

Fast forward to mid-June; I had landed at the airport in Jakarta, dazed and stunned that I was really about to spend nearly three months on my own in a brand-new country. I stepped out from the lobby and into one of Indonesia’s ubiquitous Blue Bird taxis, and sped onto the highway and into what would turn out to be a time of much needed growth and alien experiences.

The first month was rough beyond my wildest expectations. I already knew I would be blue with homesickness, but I wasn’t ready for the physical afflictions that awaited me. It started with persistent and intense red spots that covered my whole body. That was followed by a fainting spell one morning; that one turned out to be a mixture of stress and low blood sugar. It concluded with one last bang in the form of food poisoning. I was too weak to even pick up the phone, so I writhed in bed for a whole day and a half. I distinctly remember crying that I wanted to go home in both English and Japanese. That was bizarre.

Once all that subsided, I was able to get in the groove of my internship and life in Jakarta. I joined the big mob of motorbike riders on the street, got used to the spiciness that came with almost every food, and managed to handle small (very small) conversations with other people.

I was placed as a copywriter for Jakarta Globe’s English nightly news show. I didn’t have any experience with broadcast news before this, so everything was brand new. I learned that I actually liked working with scripts and finding the right video and right background music. As a print writer, the visual side of the news was something that I hadn’t really worked with before. 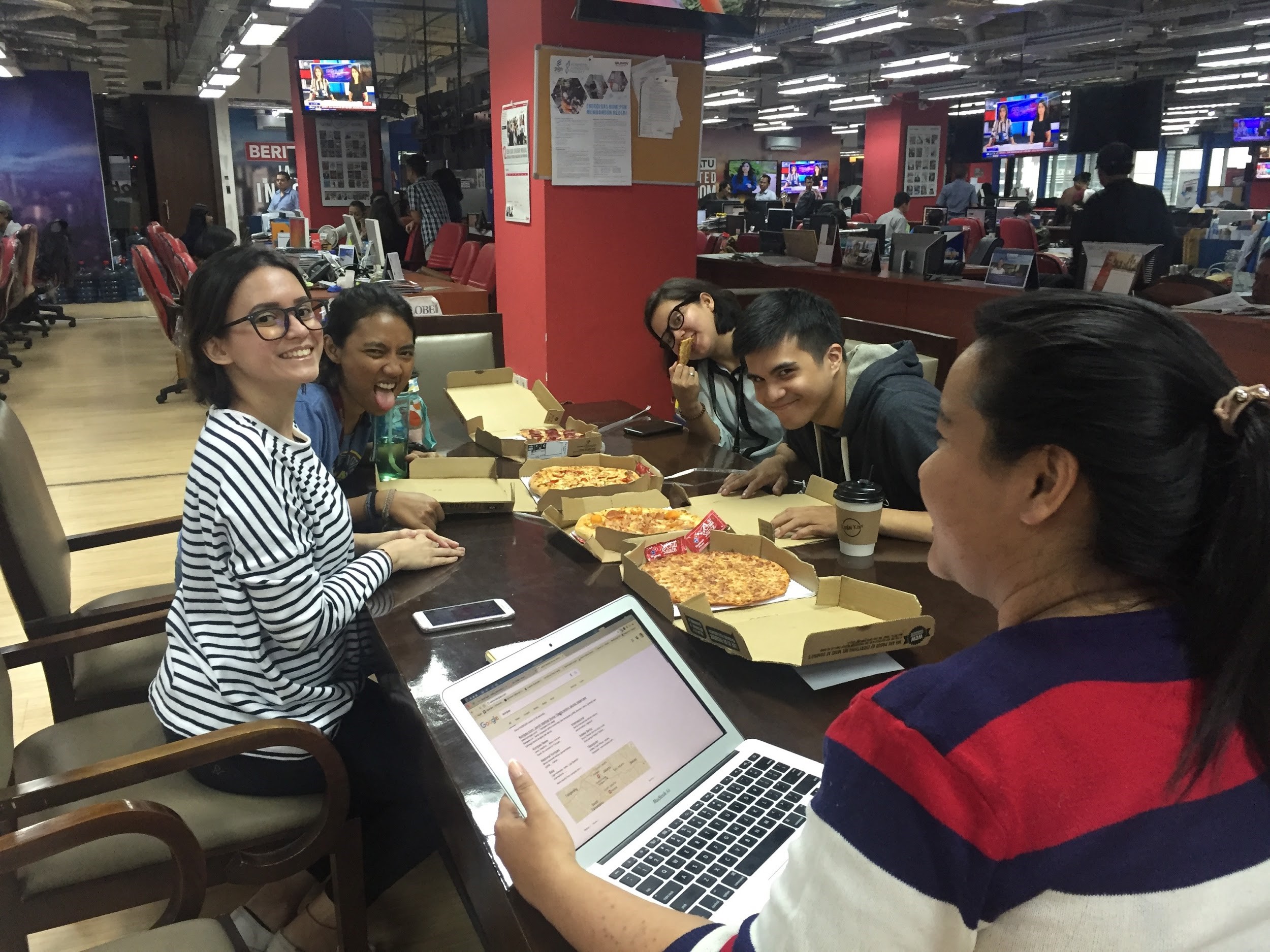 The news I got to cover was quite colorful too. I got behind the camera at a Canadian embassy event and took pictures with Indonesia’s fearless Minister of Fisheries at the American embassy’s Fourth of July bash. I tagged along to an interview with the spokesperson of Hizbut Tahrir Indonesia, recently banned by the government for allegedly threatening national unity. I also interviewed the curator and artist of an art show in a warehouse. The team tasked me with doing some voice overs for the news. It’s a strange thing to think that my voice was being heard by people tuning into the news across Jakarta. 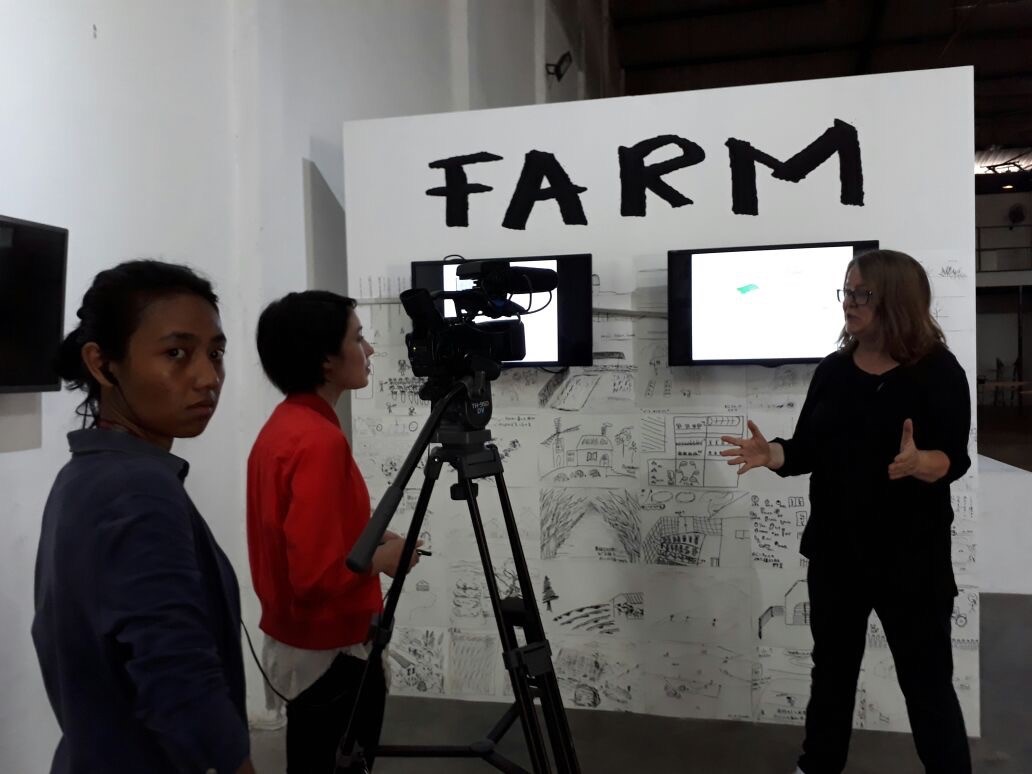 Interviewing one of the artists showcased at OK Video art exhibit in South Jakarta. The theme of this year’s show was “food politics.”

My coworkers took me under their wings, and now I have a group of people that I can call my dear friends even when I’m back in Seattle. I was scared that I wouldn’t fit in, but they embraced me, zany jokes and all. Then again, they were quite creative jokesters themselves. I can have a hard time warming up to people, but I was able to chip away at the barrier that usually stands between me and others. They invited me to their homes, shared their thoughts, and inspired lots of laughter.

I also couldn’t have done all this if it weren’t for the support of my family and friends. There were times when I really just wanted to go home, but every time, someone was there to lift me up. When I got the red spots, I panic-called my brother and sister-in-law, who reached out to a friend of a friend living in Jakarta to take me to a clinic. After my stress and low blood sugar induced fainting spells, my parents immediately sent me a big box of snacks and food. My first ever care package!

During this trip, I had to survive and overcome so many things. Knowing that I was able to live on my own and do good work at an internship gave me a lot of confidence I didn’t have before. But at that heart of all that were the people who were there for me every step of the way. Now, I’m ready to take these lessons and memories and conquer new experiences in Seattle and abroad!