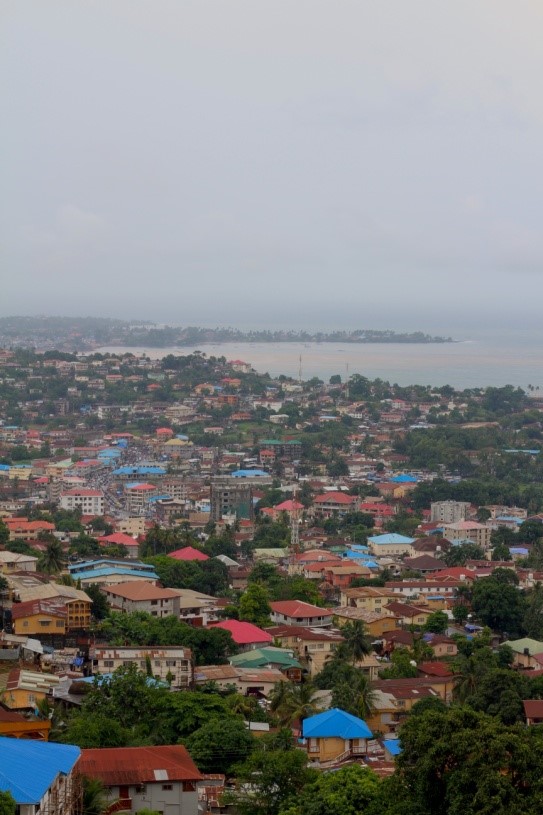 Waking up in humid Freetown can occur in a variety of ways. It could be simply by the weather; the sun brightening the curtain in your window, or the pounding of rain on the nearby zinc rooftops. Or it might be the city dwellers, both human and animal, rising to the morning, shouting their greetings to each other from across narrow alley-like roadways; sometimes it’s a pleasant exchange, and sometimes it’s a dogfight. Either way, once you’re up, the humidity and urban rumblings usually keep you up.

When walking around the capital city of Sierra Leone, it’s important to be awake. By that, I mean on your toes. Not for the sake of being overly cautious of your safety (although that doesn’t hurt), but to be able to take in everything.

The largest and most populous city in the country, Freetown has a deep history, including as a battleground in the civil war that ended less than 20 years ago. The city, and the country as a whole, is still recovering from the conflict, which is evident once someone has been on the ground in the sprawling city for a few days. Many buildings are falling apart due to damages sustained from fires, flooding, or inadequate maintenance or construction.

Freetown is a crowded, bustling city. Its streets wind up hills that roll steeply up to the Atlantic coast. Street traders occupy whatever sidewalk space they can to sell their wares or cooked goods, leaving little walking space for pedestrians. Sometimes those passing by are pushed onto the streets, forced to dodge the traffic zooming by, heavy with aggressive motor bikes and taxis. The war-torn infrastructure, lack of a corruption-free government, and massive national debt, all contribute to the nation’s hectic mood.

That’s why I was so grateful to be linked up with the nation’s most established newspaper, complete with a downtown newsroom, knowledgeable and capable local reporters, and a reputation that made my own reporting much easier.

When it comes to reporting around the city, anything can come up. Upon my arrival in Freetown, I was expecting to do a lot of reporting on the mudslide that occurred in August 2017, a major disaster that claimed more than a thousand lives and made headlines around the world. That was what I wrote about for my first story, but I only authored one additional piece on the slide’s ramifications before I left. That was largely because other, more pressing events, occurred since my arrival. After the initial mudslide, aid packages were donated, a report full of allegations of corruption against the previous government was published by the current administration, and a large risk of flooding was discovered near the city’s largest garbage dumping sites. Amongst others, reporting on these topics consumed a lot of my time.

However, even with the respected reputation of Awoko on my reporter’s badge, the Sierra Leonean bureaucracy slowed reporting a great deal. In this country, government branches don’t have websites or databases through which I could access helpful information, sources often forget or didn’t show up to scheduled appointments for interviews, and often the only time that an interview can take place was at a predetermined, orchestrated press conference. So, with stories developing on a slow, inconsistent basis, I had to focus my attention on multiple pieces at once. It took time, creativity, and persistence to produce many of the stories that I wrote, but it was gratifying to know that it was more than possible to write effective news stories in Freetown, despite the obstacles. 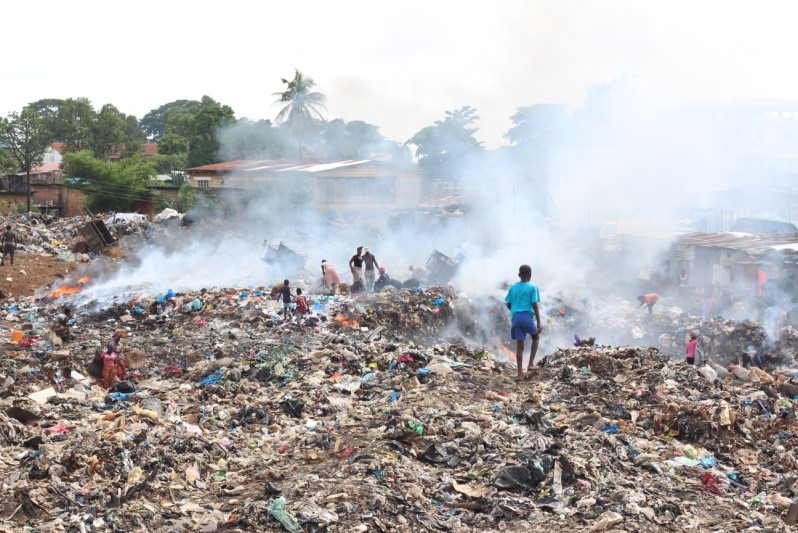 Trash burning and scavenging at one of the city’s two main dump sites.

When I wasn’t reporting for a story, I got out and explored different parts of Freetown. A diverse city with cheap public transportation, I was able to see how locals spend their time in the capital. The westernmost part of the city, which has a sandy beach that sits right on the Atlantic, is a more touristy area that has bars and nightclubs. Just as there are a few more beaches further along the coast, there are a few other nightclubs strewn about the city. I also played soccer most weekends, either at a beach, on the streets, or in a full game organized by people from the community. 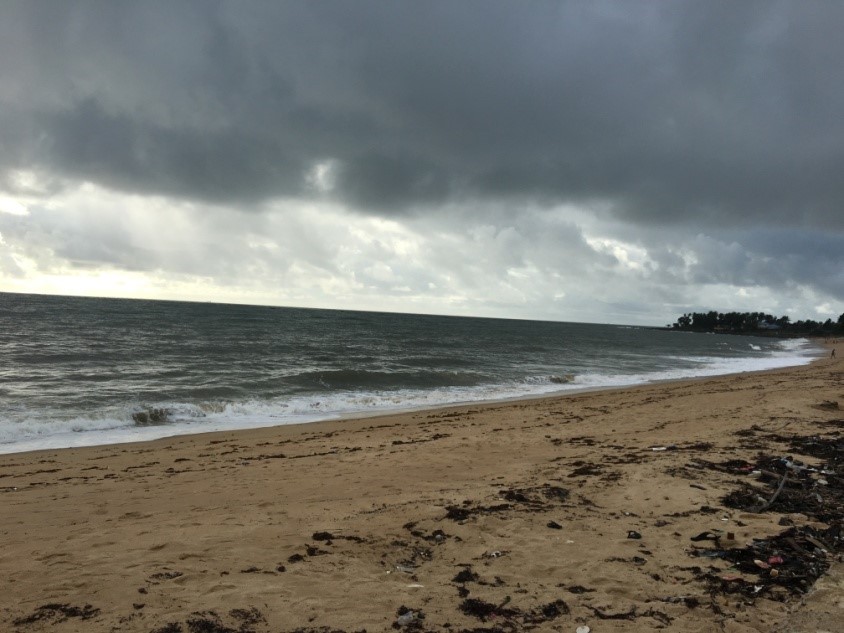 The Atlantic Ocean, as seen from a beach in the Goderich neighborhood.

As a white foreigner, I stuck out, but that largely resulted in friendly people coming up to me to introduce themselves. I made friends often and quickly just walking on the street. The people of Sierra Leone are very welcoming and will often go out of their way to assist you with anything, journalism-related or otherwise; it made wandering around the city much more enjoyable. Walking around also allows for observation of the varying parts of life in the city, from rambunctious marketplaces to beachside restaurants, to garbage dump slums. Some of my walks to, during, and from reporting assignments, provided the most enlightening glimpses into the realities of life in Africa, both positive and negative; stuff I’d read about and seen on a screen, but had not yet experienced in person.

On a few occasions, I was fortunate enough to get out of the city and explore the provinces “up country”. In some of those areas, I saw less and less human influence, as three-story buildings and zinc shacks gave way to long stretches of forest-dominated rolling hills, with the occasional mud brick hut. Seeing both sides of the country, urban and rural, in different ways was one of the more experiential aspects of the Foreign Intrigue program. 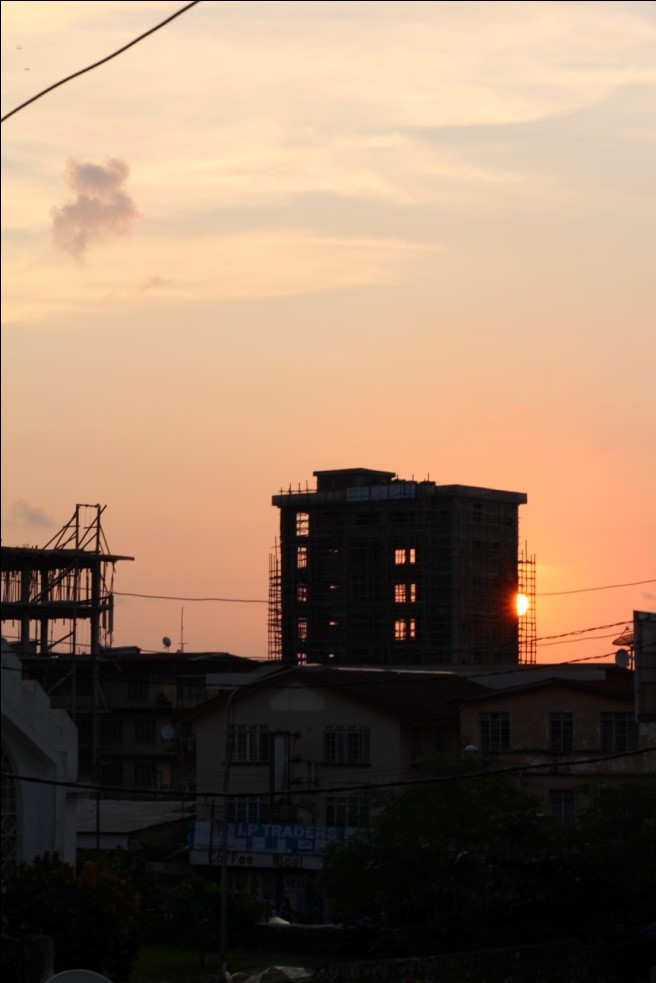 Sunset from the Awoko office.

Before going to sleep at night, I often laid in bed and thought about my day. Sometimes it was thinking about an interview I had conducted for a story I was writing, or an interaction I had with a local, and other times it was about the overall state of the nation, and how it could possibly handle its systemic corruption. I also mentally compared Sierra Leone to my home in the San Juan Islands. Living in a developing country for the first time allowed me to learn things in way I never could have while on my university campus. Appreciative of my good fortune in completing my degree with an immersive trip to a naturally beautiful country in Africa, I generally slept well at night, the wet season drizzle slowly lulling me to sleep.